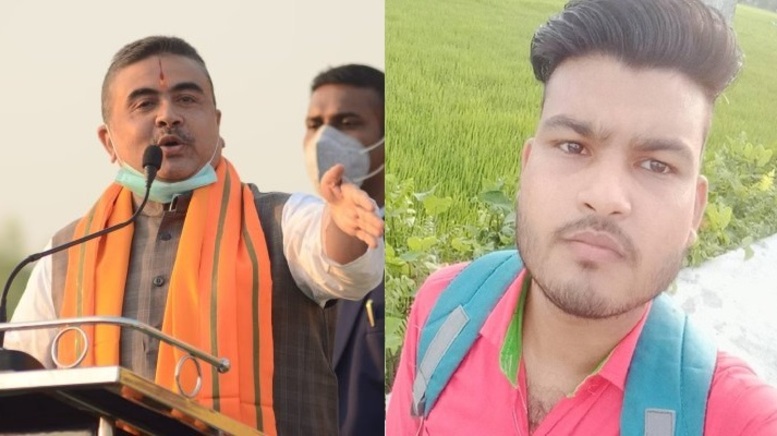 West Bengal Leader of Opposition Suvendu Adhikari is fast becoming known for his plain speaking, a rarity in India’s secularism-pretend politics. Despite intense pressure, including legal cases, by the ruling TMC regime to shut him up, Adhikari has been speaking up about the plight of Hindus, and against the lawlessness that prevails in West Bengal today.

In tweets made on November 30, he shared two such incidents.

We have earlier reported how a Muslim student of Falakata College, Mohammad Fayez had attacked a Hindu female batchmate with a sharp blade and caused serious injuries after the latter turned down his “proposal” multiple times. The girl was taken to hospital and had received multiple stitches on her face and neck, while the stalker had been arrested by local police later that day.

However, it was not revealed by any media platform that after the perpetrator’s arrest by West Bengal police, his supporters had created mayhem at Falakata. Suvendu shared that this mob set shops on fire and engaged in vandalism. RAF (Rapid Action Force) had to be called in to control the situation.

Can one imagine the level of radicalization in the Muslim community, and the enabling environment that Mamata Banerjee has provided, that they are ready to riot for a criminal who brutally attacks a defenseless girl? And this news has not made it to front pages of our ‘national’ English-language newspapers, whereas even a scuffle in JNU is treated like a national emergency.

b) In Barabani; Paschim Bardhaman, TMC goons led by Md. Akbar Alam attacked @BJYM Mandal President; Bapi Pradhan, his mother & others, upon returning home (he had to flee due to post poll violence) after the intervention of Hon'ble Calcutta High Court. @WBPolice = mute spectator pic.twitter.com/o4nYLUp3zt

In another tweet, Suvendu shared that TMC goons led by one Md. Akbar Alam had attacked Bapi Pradhan, his mother and others in Barabani, Paschim Bardhaman district. Bapi is the Mandal President of BJP’s Youth Morcha and was compelled to flee in the face of the post-poll violence. He was living in exile for months and after he decided to return to his home and village, the TMC goons attacked him, Suvendu shared with video evidence.

Tagging the official Twitter handle of the West Bengal police, he complained that the state police had been a mute spectator whenever such violence occurred.

Actually, WB Police has not just been a spectator, they have actively colluded with TMC workers to hound and harass BJP workers during the post-poll pogrom and afterwards. BJP workers and their families have been threatened, asked to pay up jizya-style protection money, sexual favors have been demanded – if they want to return to their villages and jobs.

When one compares West Bengal’s situation to recent events in BJP-ruled Tripura, it completely shows up the double standards and innate anti-Hindu bias of our secular state. Communal tension after Tripura BJP took out a rally in support of Bangladeshi Hindu victims of violence in the neighboring country, and allegations by TMC that they were ‘attacked’ during campaigning for Tripura civic polls, shot up the escalation matrix of our Republic with alacrity.

Supreme Court heard all Tripura-related petitions with exceptional speed, ordering extra central forces to be dispatched for poll duty, and staying criminal proceedings against two journalists accused of spreading fake news to incite Tripura’s Muslims. HM Amit Shah also met a delegation of TMC MPs and assured them he would speak to Tripura CM and seek a report.

West Bengal has been burning for at least 3 years now. Political violence has been a part of the state for decades, but murders of BJP workers and leaders have accelerated ever since TMC decided to squash the emerging threat from BJP from the 2018 panchayat elections onwards. But not once in all these year has SC issued strictures against Mamata, and the centre has also shied away from using Article 355 and 356.

One netizen commented on Suvendu’s tweets – “If it was CONgress government in center and this was BJP government in WB, I am sure the central government would have imposed president’s rule in WB instead of playing victim card at the cost of people.”