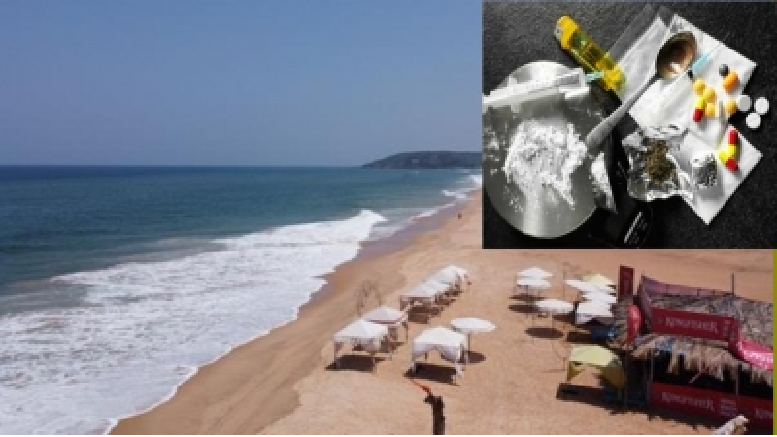 The coastal state, Goa known for Sun-Sand-Sea, has emerged as a haven for narcotics trade, which is flourishing and resulting in deaths of visitors. With the recent death case of BJP leader Sonali Phogat, who was allegedly forced to drink water mixed with ‘Methamphetamine’ has suggested that drugs are very easily available in the state.

Last week, Goa Crime branch police arrested one Nigerian national woman, who allegedly tried to smuggle drugs to Goa by concealing the consignment of drugs worth Rs 15,10,000 in her sandals. The accused person had arrived from Delhi by train carrying the drugs. Many such similar cases have happened in the past.

Though the government claims adoption of a zero tolerance policy against drug trafficking and surprise checks in bars, restaurants and shacks along the drug-prone belt, drug related deaths and such incidents continue to happen in the coastal state.

It is generally believed that drugs came to Goa with the hippies six decades ago, however since then Goa continues to be haven for narcotics. Many beaches of Goa were thronged by the hippies before and now domestic tourists too visit Goa and fall prey to drug peddlers.

In Phogat’s case, the Goa Police on Saturday seized ‘Methamphetamine’ drugs given to Sonali Phogat from the washroom of the Curlies restaurant in Anjuna-Goa. Dattaprasad Gaonkar, who was working as a room boy in Hotel Grand Leoney Resort in Anjuna, where Phogat was staying during her Goa visit, has been arrested for allegedly supplying drugs. Also the owner of Curlies restaurant Edwin Nunes has been arrested.

The Curlies restaurant had come into the spotlight during the investigation into the death of British teenager Scarlett Keeling in 2008, who was found dead at Anjuna beach. Police, initially, had claimed that she had died due to accidental drowning. Her mother had then reportedly claimed that her daughter went to Curlies shortly before the incident. Later it was revealed that she had also been sexually assaulted.

In the past, deaths of youths have been reported in Goa, who participated in Electronic Dance Music (EDM) festival. Opposition then demanded a CBI probe into the incident involving drugs.

A legislative report tabled in 2013 on the police-drug mafia nexus in Goa had exposed just how deeply rooted the drug mafia network is in the police and political hierarchies.

Goa is increasingly known as a narco-tourism hotspot and many arrive in the coastal state with the intention of ‘trade’ and ‘consumption’. In 2020, the BJP government in Goa was reportedly considering legalising the cultivation of marijuana or cannabis for medicinal purposes. However, after facing opposition the plan was dropped.

“Drugs issue is plaguing the state or Goa. Every day you will find in newspapers a nice photo (with) police constables surrounding a particular person saying he is caught with drugs. Look at the quantities that are being caught. Pathetic… peanuts… never have I been able to read on papers that a person with substantial quantities of drugs are caught. Peddlers cannot get drugs unless unless there is a supplier. Tell our police force to identify them. They are only catching peddlers who are roaming with a couple of grams,” Sequeira had said.

Drug menace again came to limelight with Phogat’s death, which has forced the people to post on social media saying — “The Paradise No more. Now a drug den”.