Muslim man arrested for grooming & abducting 15-year-old Hindu girl, claimed “we are in love for 7 years”: Kasganj, UP 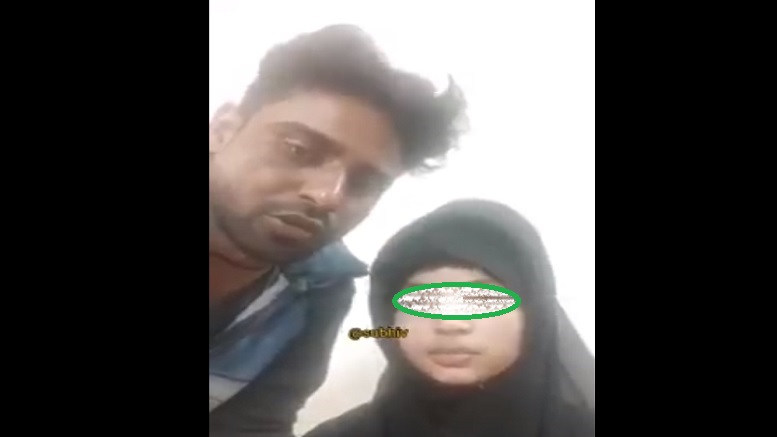 A Muslim man named ‘Raju’ (not real name) from Kasganj in Uttar Pradesh groomed a 15-year-old student and abducted her while she was on the way to school. He then lured her into converting to Islam and ‘marry’ him.  The pedophile then reportedly released a video alongside the girl where he was seen justifying his actions.

The minor studying in her 10th standard is a resident of Amanpur in Kasganj district. She was on her way to school when the abduction happened. A case has been registered against the accused following complaints from the girl’s father.

Kasganj SP Rohan Pramod Botre said that several search teams were immediately formed and the accused’s mobile phone was put under surveillance. This helped the police find both the accused and the minor girl.

Local police arrested him within 24 hours of the sickening videos appearing on social media platforms. It is being alleged that the accused is already married and even has a child, although HinduPost has not been able to confirm the same. From his looks, ‘Raju’ seems to be at least double the minor girl’s age.

The girl goes on to add that “My Raju loves me more than anyone, even my own mother would not love me as much.”

Kasganj SP Pramod Botre said that the matter is being investigated and promised that strict legal action will be initiated against the accused. The accused has been booked for kidnapping with an intent to compel the minor girl into marriage.

“Islamists are changing their names to trap and then sexually exploit Hindu girls, but no effective action is taken. When the Altaf case happened, so many organizations and activists gathered, but today no one came to save this girl,” said Manoj.

Altaf was a 22-year-old Muslim man who had groomed a 16-year-old Hindu girl and later sent her to Delhi with a friend of his. He was arrested when the girl’s father lodged a police complaint. Later, he committed suicide in the police station. The whole left-liberal ecosystem had gone ballistic alleging he was ‘killed’ by police. They spread propaganda that police had killed an ‘innocent’ Muslim, totally papering over the fact that Altaf had indeed groomed, sexually exploited and abducted a minor.

Later, the girl recorded her statement in front of a magistrate where she stated that Altaf and his father tried to convert her to Islam. She also said that Altaf’s father, Chand Miyan, had stared at her lecherously on multiple occasions. It is often seen that Hindu girls groomed by Muslim men are then sexually assaulted and exploited by multiple men in the Muslim family.