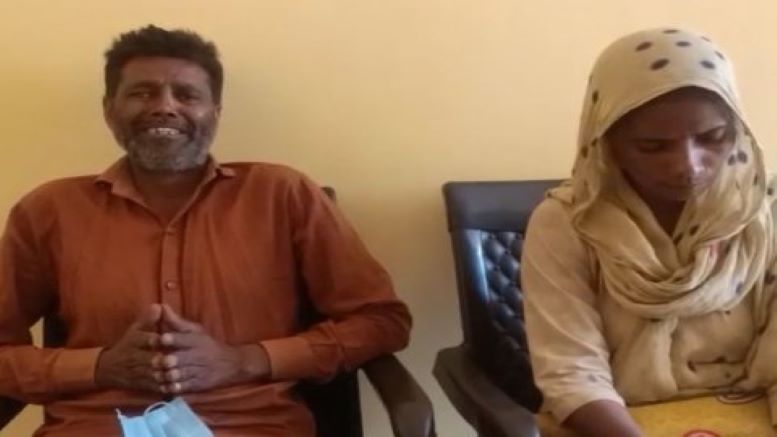 A minor schoolgirl belonging to Loni in UP’s Ghaziabad district who went missing on 16 March has been rescued after NCPCR (National Commission for Protection of Child Rights) intervention. The plight of the minor and her parents who belong to the Jatav SC community was brought to light by Swarajya Mag journalist Swati Goel Sharma.

As per reports, the minor’s family had threatened to commit suicide if the police failed to find their daughter. On learning of this, Sharma highlighted their plight on social media (SM) and called upon NCPCR to intervene and help the family trace the minor.

The minor girl who had been kept captive for 10 days by the accused is said to have been raped in captivity. Sharma was informed by the girl’s father Salekh Singh of her recovery after 10 days on 31 March. The rapist is even said to have entered into a deal with a Bengali woman to sell the minor girl.

The parents have said that the minor is 15-year-old and is studying in class IX. The father’s complaint lodged with the police on March 16, says that he got the girl seated in a shared autorickshaw at 7 AM that morning to send her to school. However, he received a call from the school at 8.40 stating that the girl hasn’t reached the school. Based on the complaint a case of kidnapping under IPC Section 363 was registered against an unidentified person.

The investigating officer is believed to have informed Singh of one Mohammad Abid’s name cropping up during the course of their investigation. Abid was identified as their neighbor by Singh who said that he knew the accused only cursorily.

In one of the video statements of Singh shared by Sharma on her SM page, a sobbing Singh can be seen questioning “If they know the name, what is the delay? Why can’t the police round up his relatives and question them sternly?”

Sharma then sought the intervention of NCPCR Chief Priyank Kanoongo. NCPCR then swung into action and sent a notice to the Ghaziabad police on 25 March. The commission also provided the police links of Sharma’s SM posts asking them to provide an action taken report.

Singh informed Sharma on March 31 that the minor had been recovered on the eve of Holi from Narela city located on the Delhi-Haryana border. “She has told us she was repeatedly raped while in confinement. She said she was taken away at knifepoint. Abid had cut a deal with a ‘Bangalan’ to sell her off. It’s a case of trafficking,” Swarajya Mag reports Singh as saying.

The girl was to appear for her exams on April 1 and Singh confirmed to Sharma over the phone that he would be taking her personally to the school and bring her back home. In the meanwhile, Loni police station’s SHO confirmed that Abid had been taken into custody on April 1. He was also booked under IPC sections 363 (kidnapping), 376 (rape), Protection of Children from Sexual Offences (POCSO) Act, and the Scheduled Castes Prevention of Atrocities Act.

Police also said that they had invoked rape charges on the basis of the girl’s statement as per Section 161 of the Criminal Procedure Code even though they were awaiting the medical report to confirm the same. The accused is said to be a 20-year-old brick kiln worker.

The police have issued a statement saying that further investigations are ongoing and the accused hasn’t revealed much information as of now.