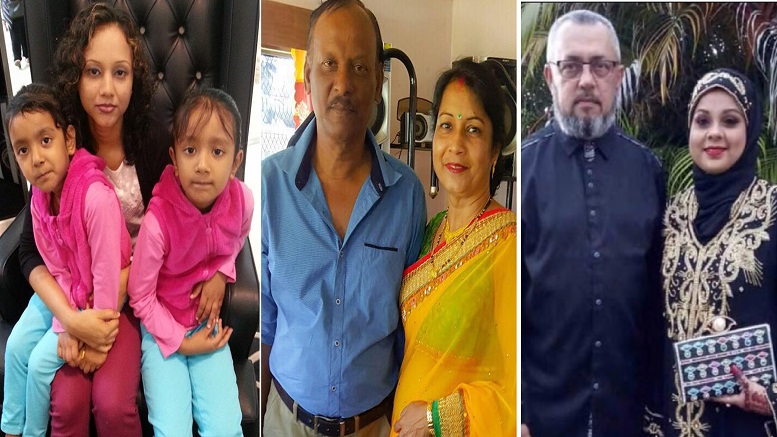 63-year-old Mohammed Raheesh Isoof of Christchurch, a Fiji-born New Zealand resident was found guilty of multiple murders and attempted murder in Fiji. Isoof murdered three adults, two young children and attempted to murder an 11-month old by abandoning her on top of a mountain. His victims were all Hindus.

Isoof poisoned 63-year-old carpenter, Nirmal Kumar, his 54-year-old wife, Usha Devi, their 34-year-old daughter, Nileshni Kajal, and her two daughters Sana aged 11, and Samara, 8. Their bodies were found on top of a cliff, the wall of which was hundreds of meters deep. A local farmer who was looking for his horse stumbled upon the bodies after smelling perfume.

Kajal’s 11-month-old niece was found crawling near the scene where five people lay dead. The baby was covered in vomit and ants were crawling all over her. She was seen crying while lying over her dead grandmother’s chest – just a meter from the edge of the cliff.

Locals termed the baby a miracle child since she had survived out in the cold all night long and had not fallen off the cliff. The bodies were found a day after they were murdered. Isoof and his partner who is in her 40s had just returned to their ‘homeland’ from New Zealand, a few days before the murders.

One of the victims was found with an empty bottle of cola in her hand which had no label on it. A toxicology report determined the victims died from ingesting a toxic substance that led police to initially suspect suicide.

Nirmal and the murderer knew each other since the early 70s. After returning from New Zealand, Isoof claimed to be rich and offered the Kumar family a fresh start in New Zealand. He brainwashed them and even offered them one of his six imaginary properties in Christchurch. In fact, he was just a bus driver in New Zealand before moving back to Fiji.

The rich benefactor act was just a pretense and those six properties did not even exist. While in Christchurch he had stayed at a rented place. Isoof was after Nirmal’s money that the family tried to withdraw from the bank, the day they were murdered.

There are allegations of witchcraft and grooming jihad after it was found that the Islamist tried to engage in sexual acts with Nileshni. He forced the family to drink a concoction that contained pesticides during a black magic ‘ritual.’ In court, the accused even claimed that he and Nirmal were like ‘brothers.’

Isoof was defended by lawyer Iqbal Khan. He questioned the farmer named Nagala who discovered the bodies as to why he did not include “ants crawling and saliva coming out of the deceased’s mouth” in his police statement and asked him why he did not mention the perfume smell to the police.

The local courts threw out his line of questioning and ruled that the prosecution had proved beyond reasonable doubt that Isoof had killed the family of five in August 2019. When you have just witnessed such a cruel crime, smells and saliva will probably not be the items that one remembers. The judge said it was evident that the accused had lied in court. Isoof will be sentenced this Friday.