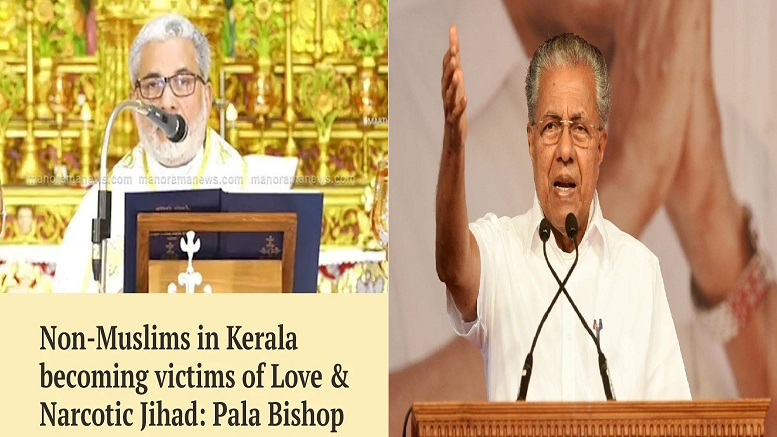 Narcotic jihad continues unabated in Kerala. Last Wednesday, a 32-year-old woman from Kollam who was groomed using TikTok was invited to Kozhikode, plied with alcohol and narcotics and then gang-raped by four at Kozhikode. They sexually assaulted her in a flat at Chevayoor that the accused had rented for ‘business purposes.’

She became unconscious following which the accused took her to a hospital and fled from the scene. The hospital authorities informed the police who recorded her statement once the victim regained consciousness. Four men were arrested for this gang-rape: KA Ajnas, NP Fahad, Lijas and Suhaib. It was Ajnas who pretended love and groomed the victim.

Though all 4 arrested are Muslims, for the left-leaning ‘liberals’ and Islamists, this is not grooming or narcotic jihad but just another rape incident. They are busy baying for the blood of a Bishop who reopened up the debate about narcotic jihad and love (grooming) jihad menace prevailing in Kerala. The Bishop meanwhile should also inform Hindus how many his church has converted using fake healing and financial allurement, and why.

Another shocking crime that came to light in February blew the lid of a racket in Muslim-dominated Malappuram district where “girls are trapped through Instagram, addicted to drugs, and then sexually abused“, in the words of district Child Welfare Committee (CWC) Chairman, Shajesh Bhaskar. A 14-year-old schoolgirl from a well-off family was befriended through Instagram, addicted to drugs and then raped at night in her own house, while other family members were sleeping, for several months by 7 seven men. Two rapists were arrested – Muhammed Aflah and Muhammed Rafeeque, both in their early 20s.

History of Narcotics and Grooming jihad

In Oct 2014, a group of youngsters, who belonged to the Bharatiya Janata Yuva Morcha (BJYM), attacked a restaurant called Downtown Café near the Kozhikode beach and destroyed the property. The BJYM activists, led by Prakash Babu, said that they had evidence to prove that the restaurant owners facilitated immoral activities. Both grooming and narcotics were allegedly involved.

The managing director of the restaurant Bazil Moosa denied the allegations. The Kerala Vyapari Vyavasayi Ekopana Samithi (a business owners association based out of North Kerala) president T. Nazeerudin visited the restaurant, demanded that the police arrest those involved in the attack and warned that the organization would be compelled to resist such attacks on commercial establishments at any cost. Malabar Chamber of Commerce secretary M.A. Mehboob termed it as ‘moral policing’ and wanted exemplary punishment for the BJP cadre who wanted to end the drug addiction and grooming that was happening openly.

There were allegations of Islamists using drugs and sex to groom young Hindu and Christian girls in and around Kozhikode beach. The final trigger for the assault was visuals of young couples and students at the restaurant, aired by none other than Jaihind Television. Jaihind is a Malayalam TV channel launched by Sonia Gandhi, which is promoted by the Congress party with the support of non-resident Indians.

What followed was left-leaning media trying hard to paint the incident as ‘moral policing’ on the part of Hindus – an attempt to repeat the disproportionate vilification of the Sri Ram Sena, and by extension of the BJP, for the Mangaluru pub incident in 2009.

The truth was that Hindus had had enough by then of the drug and grooming menace emanating from Malabar. Sensing their hold on the narrative weakening, the Islamist-communist combine decided to shift the focus from Kozhikode to Ernakulam. Left-leaning pimps, prostitutes, urban Naxals, liberals and some transgenders were roped in and they conducted the ‘Kiss of Love’ (KoL) at Marine Drive in Kochi on Nov 2, 2014 against ‘moral policing.’

For those unfamiliar with it, KoL was led by Rahul Pasupalan and his partner Reshmi Nair. KoL supporters showed up, holding hands, hugging and kissing in public. The police took over 100 KoL activists into custody as a preventive measure to maintain law and order. The motive was achieved and the media were able to bury the drug menace surrounding Kozhikode beach. Kozhikode beach is just 30 km from Malappuram, which incidentally is also a stronghold of quasi-terror Islamist outfit PFI.

Later on, it became clear that Rahul and Reshmi were hand in glove with underworld criminal Abdul Khader alias Ali Akbar and his wife Rubina. These people were involved in an online sex racket, which included running a Facebook page for pedophiles called ‘Kochu Sundarikal’ (Little Beauties) where underage girls, some as young as 6 years old, were being used. Like hot potatoes, the Islamist-communist combine dropped the couple once their reality became known.

The media that cooked up the moral policing story carefully avoided the drug running angle and most shunned the 2016 court order that acquitted all the BJP leaders involved in the Downtown Cafe incident. But the spark of resistance had been ignited amongst the new generation of Hindus.

There were similar allegations during the 1990s, especially during the infamous Ice Cream scandal involving the Muslim League ex-MP P K Kunhalikutty. Like Downtown Cafe, the illicit Ice Cream parlor was near the Kozhikode beach. It was alleged that he and others were sexually abusing minor girls after plying them with drugs and making them drug addicts. Even today, though in opposition, Kunhalikutty holds much sway in politics since he has the support of none other than the Kerala Chief Minister.

Narcotic drugs continue to flow into the state unabated even during the lockdown, and in most cases the suppliers are Muslim men while the targeted women are Hindu or Christian. The resorts where such drug-fueled rave parties occur are allegedly owned by communist leaders.

In November, Bineesh Kodiyeri, son of the CPM Kerala state secretary Kodiyeri Balakrishnan, was arrested by ED for money laundering after his close aide Mohammed Anoop was arrested in Bengaluru for drug peddling. It was later discovered that Md. Anoop also had links with Swapna Suresh, the lady accused of running a gold smuggling racket out of the CM’s Office with assistance of the UAE consulate.

Afghanistan is the leading producer of highly addictive narcotics and smugglers ply it to Bharat. For Muslims, narcotics are haram (forbidden) and largely shunned. In Saudi Arabia, you are beheaded if caught smuggling narcotic drugs. So the question arises, for whom are these drugs intended? An objective analysis will show that the primary target are non-Muslims, especially girls who are forced into sex slavery after being addicted. The Pala Bishop is right: Narcotics Jihad and Grooming Jihad pose a clear danger. But not just to Kerala, rather to the whole of Bharat.