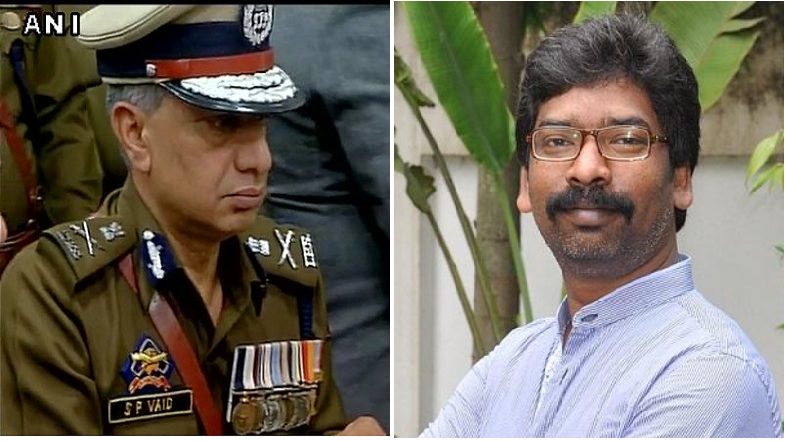 Teenager Ankita Singh’s brutal murder by her stalker Shahrukh Hussain, who was demanding that she convert to Islam and marry him, has shaken the country. Ankita was burnt alive as she slept by Shahrukh and she passed away on Sunday in a Ranchi hospital.

Both Shahrukh and an accomplice Chottu Khan, who supplied the petrol, have been arrested. Shahrukh had been stalking Ankita for 2 years, and both he & his brother had threatened to kill Ankita when she warned that she would get them jailed. The area of Dumka where she lived is Muslim-dominated.

Shockingly, allegations emerged that Dumka DSP Noor Mustafa was assisting in watering down the case against Shahrukh. DSP Mustafa has also been accused of anti-vanvasi actions in the past. He reportedly failed to file a chargesheet against one Zulfikar booked under SC/ST Act within the 90 day limit, thus allowing him to get bail. Following objections raised by Ankita’s family and other Hindu groups, DSP Mustafa has been removed from the case by the Jharkhand govt.

The incident occurred at a time when CM Hemant Soren, facing disqualification as an MLA due to an office of profit charge, was off for a ‘picnic’ with his JMM-Congress alliance MLAs.

It pains me & it should pain every Indian to see what Ankita went through. Criminal stone pelter was air ambulanced by the same Jharkhand govt, but when it came to Ankita, a victim of violence and love jihad, her plight fell on deaf ears of CM Hemant Soren. #JusticeForAnkita

Not a single senior leader of Jharkhand govt – JMM/INC visited Ankita on her death bed. No outrage by leaders like Rahul Gandhi, Arvind Kejriwal, Mamata Banerjee, Nitish Kumar, and so on. Ankita’s story deserves to be told and should worry every Indian. #JusticeForAnkita

There was no remorse on the face of accused Shahrukh Hussain. He was laughing in Police custody. Why? Because the accused knows, the support he will get from political class on their vote bank politics and the criminal justice system of our country. #JusticeForAnkitaSingh

The stone pelter who was air-ambulanced to Delhi for treatment at the Jharkhand govt’s cost was Nadeem Ansari. He was injured in the violent ‘Sar Tan Se Juda’ protests that broke out in June in Ranchi over Nupur Sharma’s comments. Meanwhile, Ankita’s family had to bear the cost of her treatment. Similar apathy and anti-Hindu bias of the JMM-INC govt was seen towards other victims of communal crimes like Rupesh Pandey, Neeraj Prajapati, VHP leader Mukesh Soni.

Hemant Soren’s brother, Dumka MLA Basant Soren, callously brushed off the crime calling it an individual ‘prem-prasang‘ (love affair) on which no party or MLA could anything. Dumka is the pocket borough of the Soren family. JMM founder and the CM’s father Shibu Soren has served as an MP from Dumka district 7 times.

Ankita dreamed of becoming an IAS or IPS officer. She would take tuitions to bolster the meagre income of her father Sanjeev Singh, a helper in a grocery store. Her mother had died of cancer some time back, and she was living with her father and younger brother, a Class 6 student, in a 2-room house in Dumka. An elder sister was married.

Murderous attacks or sexual assaults on Hindu girls by Islamist youth occur on a daily basis in Bharat and our neighboring nations. Just recently, a Class XI girl Naina was shot in the shoulder by one Armaan Ali after she stopped interacting with him upon learning his true identity.