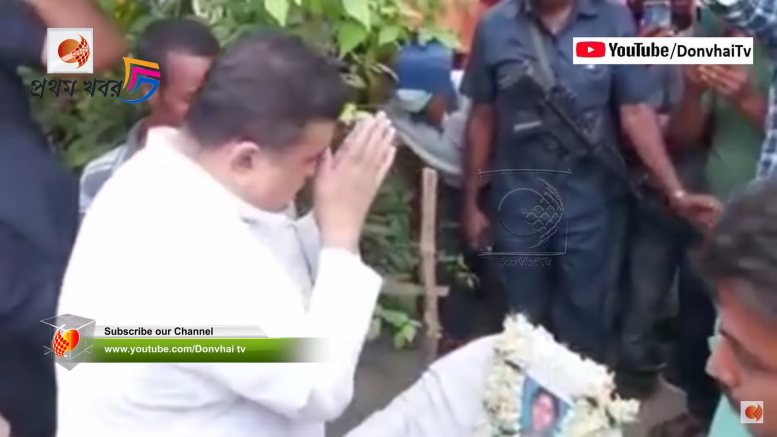 A BJP tribal female worker was raped and murdered in Paschim Medinipur (West Midnapur) District’s Pingla. The woman’s body was found on April 20 in the Pingla area’s Ujan village. Leader of Opposition (LoP) Suvendu Adhikari visited the victim’s family the next day. Along with the delegation of tribal MLAs and Dr. Archana Banerjee, he paid homage to the victim, Aruna Singh.

“Our Mahila Morcha worker, also a tribal, was raped and murdered. Over 100 cases of molestation, rape, and after rape killings have been reported in the last one month”, ANI quoted Adhikari. Villagers who met Adhikari also highlighted that alcoholism was a significant problem leading to rising violence in the area.

The LoP has also written to PM Modi regarding the ‘improper conduct’ of Central cadre officers who have been deputed in West Bengal. Suvendu further noted that these officers passed off central schemes as those by the TMC-ruled Bengal government.

“Their actions and conduct are not only unexpected but are also in transgression (if not violative) of the rules and norms,” reads the BJP leader’s letter. The BJP leader also pointed out the misplaced prejudice of the officers. Special mention was made of Uttar Dinajpur District Magistrate Arvind Kumar Mina. The BJP leader alleged that the names of three Central Government schemes were “consciously mentioned erroneously.”

The BJP leader claimed Pradhan Mantri Awas Yojana, Swachha Bharat, and Pradhan Mantri Gram Sadak Yojana have been deliberately mentioned as Bangla Awas Yojana, Nirmal Bangla, and Bangla Gramin Sadak Yojana. “I feel appalled that an Officer is following the agenda of the Ruling Party of the State of West Bengal, i.e., to rebrand Central Government schemes as their own and try to steal undue credit,” he said.

The West Midnapur police have initiated an investigation into the murder of the BJP Mahila Morcha tribal woman. A man named Ranjan Sing has been arrested in connection with this case. Bengal has witnessed a steep rise in crime ever since Mamata Banerjee returned to power.

BJP workers and supporters in general and women cadres, in particular, have been subjected to brutal violence. Rapes of BJP women workers have been reported regularly from Bengal. The victory of TMC for the third term in West Bengal was marked by “ceremonial rapes” of women who supported the BJP or had a male member in the family who had worked with the saffron party. Houses and shops of BJP workers were either gutted down or vandalized. These poor grassroots workers hid in fields and behind bushes for months as a political murder awaited them upon their return home. Close to one lakh Bengali Hindus had to take refuge in the bordering state of Assam.

BJP’s five-member fact-finding committee constituted by party chief J.P. Nadda to ascertain details of the rape and murder of a minor girl in West Bengal’s Hanskhali has recommended imposition of Articles 355 and 356 in the state, citing the deteriorating law and order situation. Females across the age spectrum appear to be unsafe under a woman chief minister!