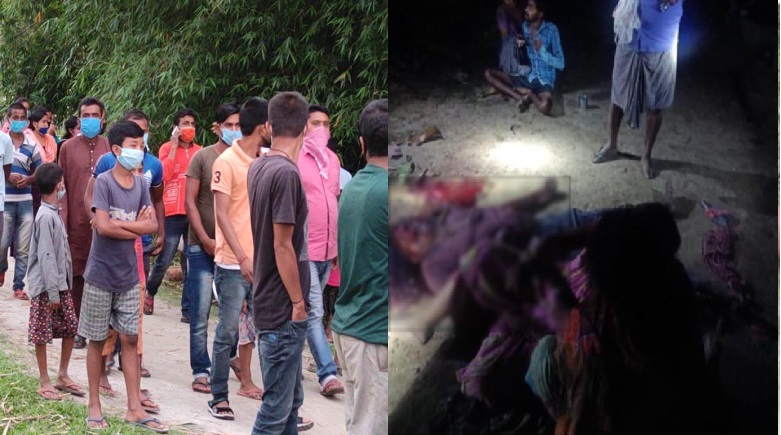 The staggering scale of the anti-Hindu pogrom taking place in West Bengal was revealed by MLA Suvendu Adhikari while talking to a reporter yesterday.

Around 1 lakh Hindu supporters of BJP and their families have fled their homes, fearing for their lives in the state-wide violence unleashed by TMC goons since election results were announced on Sunday, Adhikari said.

“The situation is horrible. Already, approximately 1 lakh people left their houses. Huge vandalism is going on across every place in Bengal. Especially Hindus are the sufferers. More than 20 people have died. Hundreds of women brutally raped by the goons….Central government should intervene. Please protect Bengal, especially Hindus.”

TMC won 48% of the vote winning 213 seats while BJP won 38% of the vote and 77 seats in the 294 member assembly. Waves of violence were reported from Sunday afternoon itself as the election trends became clear.

No Media will cover this. No intellectual will shout death of democracy. Om shanti 🙏🏻 pic.twitter.com/hmc3wK5GYF

Corroborating Suvendu Adhikari’s estimate of around 1 lakh people fleeing their homes in WB, BJP President JP Nadda told a press conference in Kolkata yesterday that the worst attacks were in places such as Gosaba, Sandeshkhali and Purba Canning where he claimed villages supporting the BJP have been attacked and that nearly 80,000 people have been forced to flee. He also said that women have been molested and raped in various parts of the state, and at least 14 workers killed.

“They are fleeing to Assam and Cooch Behar where the party can protect them. This is the work of a divisive CM who discriminates between the people of the state by their political preferences,” Nadda said.

BJP leader Swapan Dasgupta had also relayed reports of around 1000 Hindu families in Birbhum having left their homes to escape TMC mobs. A heart-rending SOS plea by a weeping Bhaskar Mandal, a Dalit BJP leader from Bengal who said he is hiding from TMC goons for 3 days without food and requests for central intervention, has also gone viral.

Assam BJP leader Himanta Biswa Sarma shared photos of hundreds of hapless Hindus, entire families, streaming across the border from North Bengal into Assam, where they are being provided relief by authorities and BJP workers

Over 450 people, who crossed over fearing ruthless oppression in Bengal, are put up in 2 shelters in Dhubri. They're are getting relief, & also being tested for #COVID19@MamataOfficial Didi is fueling miseries of people. Shameful! pic.twitter.com/xaBztUFOri

Meanwhile, West Bengal police have termed reports of two BJP polling agents in Nanoor, Birbhum being gang-raped by TMC goons as ‘fake’. One of the women in question was made to attend a press conference with TMC’s contoversial Birbhum district president Anubrata Mondal, where she stated, “It was wrong news. A few of the Trinamul workers had threatened me and I went to another village out of fear. But what has been claimed did not happen with me. I have lodged a complaint with the police to take action against those who have circulated the news.”

Anubrata Mondal is a multiple-murder accused TMC leader, for whom the word ‘goon’ feels grossly inadequate. During Mamata’s reign, he has been separately accused of murdering Sagar Ghosh, the father of independent Panchayat election candidate, and a BJP worker, Bapi Ankure; neither of the cases resulting in a conviction despite HC and SC expressing displeasure with the state’s investigation. Some of his other ‘achievements’ – inciting TMC supporters to burn down the houses of independent candidates and bomb police if they dared interfere, threatened to chop off the hands of Congress supporters, threatening to burn down houses of protesting farmers in front of police, threatening journalists.

With such a goon sitting beside her, the woman’s statement denying she was raped should be taken as seriously as the testimony of minor Hindus girls abducted in Pakistan who tell Pakistani courts that they left ‘of their own will’ with their abductor. The reports coming in of sexual assaults against Hindu women from Bengal are just too numerous and wide-spread to be dismissed just because a thoroughly politicized and compromised WB Police say so. First, the state needs to provide safety to these hapless Hindus of Bengal who ‘dared’ to exercise their democratic right by supporting BJP. Once the women have the confidence that they will not be abandoned to the mercy of the same goons who violated them, then we can expect the truth to emerge.

Anti-Hindu left-liberals were initially denying that the post-poll pogrom was even taking place, echoing TMC’s stance that BJP was using ‘fake or old images and videos’. Media also played its part in the cover up by using skeptical headlines and use of keywords like ‘alleged’. Note: as of 6 minutes ago, TimesNow is still reporting that violence in West Bengal targeting BJP workers is ‘alleged’.

No media organisation has thought it fit to report consistently from the ground or camp out in affected villages of West Bengal, the way they had descended on a UP village in the wake of the Hathras incident. The few reporters who are daring to report the truth are being threatened by TMC MPs.

This is how yet another exodus of thousands of Hindus is being hidden in plain sight, despite us living in the digital age in 2021. Truly, the comparisons with the 1990 Kashmiri Hindu exodus are apt.

And just now, reports are coming in of Union minister V Muraleedharan’s convoy being attacked as he was trying to visit violence-torn areas in West Midnapore (Paschim Medinipur) in West Bengal.

Yet, TMC leaders like MP Mahua Moitra, a darling of left-liberals, are penning pieces for New York Times, claiming, “We weren’t just fighting to form a state government, but to stop Modi’s “centralizing, authoritarian juggernaut, which seeks to destroy India’s federalism and its secular character, and transform our country into an autocratic Hindu state.”

But even more importantly, will the BJP central leadership pay heed to what grass-roots leaders like Suvendu Adhikari are saying, and act to provide safety to their suffering Hindu supporters in Bengal?