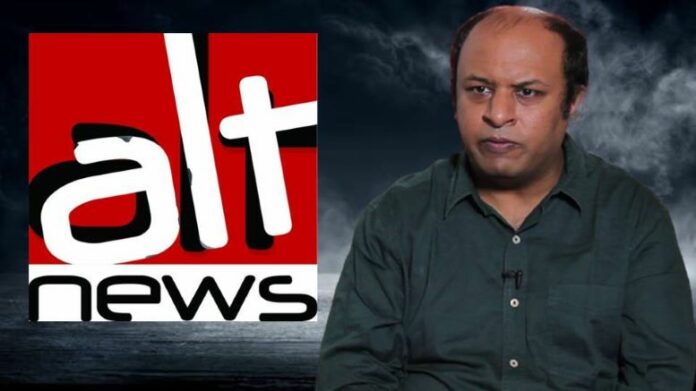 Co-founder of propaganda website Alt News Pratik Sinha has been accused of sexual harassment. The anonymous woman shared her ordeal on Instagram through a handle named Fightforajustworld on January 14. In her preliminary remark, she asks her post should not be dismissed as it is against Alt News while adding she would be called ‘RSS stooge, a BJP mole’ but added she has “been fighting against the right wing with my own means and ways”.

In her post, she alleged Sinha is manipulative and a sex maniac. She further added that he made other women enter into a physical relationships using the same modus operandi he had used with her.

The victim said she has known Sinha for a few years and was impressed by his work. The two started communicating on Facebook in April 2020. She shared her number out of trust with him when he asked for it on the very first day. In the following months, they chatted over messages initially and later on phone and video calls.

Within two months, Sinha expressed ‘his more than friendship feelings’ for her but she said a relationship wouldn’t be possible for two years due to her academics. Sinha agreed while adding “isn’t talking with, seeing, exploring anything or anyone else and hence would like to continue this”.

In November 2020, Sinha said he wouldn’t be able to continue the relationship but they continued talking. However, in December 2020 he claimed he still had feelings for her and said they should meet as soon as possible after the pandemic and their vaccination. He continued pursuing the woman even after she stopped communicating with him in February 2021 due to his changing stances on the emotional front.

In July 2021, he reiterated his ‘genuine feelings’ for her and asked her to meet him in September 2021 before he left for Kolkata. The two decided to meet in the first week of September and stayed together for three days when they got into a physical relationship.

The woman had made it clear that she wasn’t interested in a casual fling. “I wouldn’t put in so much effort, changing two flights to meet up with someone, if it was casual”, Sinha said when the woman asked him frankly. According to the woman, he even expressed his desire to marry her after she completed her studies. The post hints that Sinha’s mother knew about them.

In the third week of September, Sinha told the victim that he had been misleading her and even his assurances about the relationship were drama. Furthermore, he admitted that he was involved with other women too and hadn’t been truthful about his feelings for her. Aghast and heartbroken, the victim told Sinha she would go public.

However, Sinha’s female friend interfered and offered to ‘resolve’ the issue between them. “He immediately sought the assistance of his friend to mediate, who in turn contacted me. She messaged & called me on the pretext of ‘trying to resolve the issue’ but the real purpose was to dissuade me from going public, to coax me into silence, & thus protect him”, her post highlights.

The victim also learned from the female ‘friend’ that Sinha was having casual physical relationships with other women and that too with multiple women. She also came to know that it was his modus operandi to lie about his single monogamous status to get a woman in bed. The friend allegedly told the victim that Sinha was a ‘sex maniac’.

The victim also said Sinha not only avoided her calls and messages but also blocked her. She termed Sinha a fraudster and one who keeps “ogling at women’s breasts”. When the victim confronted Sinha, he said that a previous toxic relationship was the reason for his behaviour and claimed to have a psychological condition making him lie.

The woman unnecessarily attacked the right wing and said Sinha was like them. “One reason we hate the right wing is that they lie to people, they spread fake news, they deceive people for personal/political gains”, she wrote.

“They are just an elaborate trap, laid to satiate his hunger for physical pleasure. It will leave you damaged beyond imagination and make you question your self-worth. Beware of such ‘champions of truth’ & their enablers who call themselves feminists, female rights warriors. They think nothing of looking out for this person’s interests because he is a public figure. They will try to convince you to keep quiet and move on rather than think about other women—they will claim all women agreed to consensual, casual flings”, she said in her post warning women not to fall for Sinha’s ‘work’.