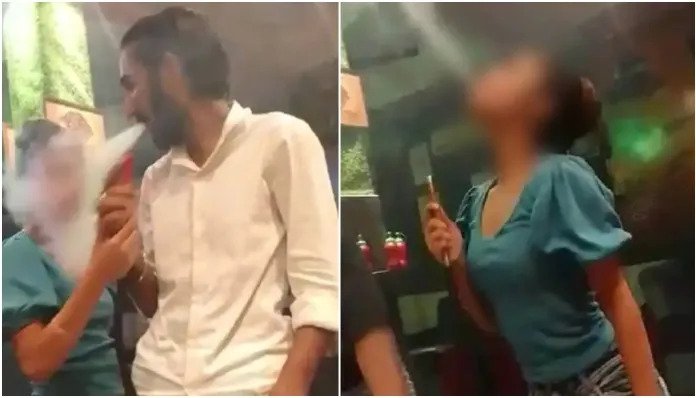 Six persons have been arrested for running a hookah bar in the name of a family restaurant in Uttar Pradesh’s (UP) Budaun District. The bar was allegedly used to trap and blackmail Hindu girls in attempted grooming/love jihad. The arrested accused have been identified as Faiz, Lalu, Ayaaz, Varun, Arbaz, and Abdul Kadir alias Jilani for running the hookah bar.

The police initiated action after videos of youngsters smoking hookah went viral on social media (SM). Stolen bikes, cash, and firearms were recovered from the accused. The incident is reported from a private hookah bar run by Arbaz in the name of a family restaurant. One of the viral videos shows a man dancing to vulgar Bollywood tunes while smoking hookah. A teenage girl, who seems to be a minor, is also seen inappropriately dancing with men while smoking hookah.

An OpIndia report on the matter notes:

It is believed that the person wearing a white shirt in the viral video is none other than Arbaz who operates a hookah bar. He has displayed a board saying family restaurant outside the bar. The Poice had sealed the bar on September 12 and had arrested Arbaz for running the bar illegally. However, on September 15, the Police arrested the other five accused in the case.

The video was shared by several media reporters who claimed that Hindu women were being targeted at the bar and that love jihad was being promoted there. ANI reporter Vipul Kashyap shared the video and said that Arbaz used to ask Hindu women to register their identity and mobile numbers in a book and then used to share the details with his Islamist friends. The Islamist men then used to record videos of the Hindu girls and used to blackmail them…

…According to journalist Rahul Sisodia, the bar promotes the practice of Love jihad and boosts Islamist men to target Hindu women…

…OpIndia tried to contact the local people to know additional details about the incident. Sachin Chauhan, District Organization Minister of Rajput Karni Sena Badaun, while talking to OpIndia said that this place, which started in the name of the restaurant, was actually a hookah bar but very few people knew about it…

…“There is a deep conspiracy ongoing from day one at the bar and Hindu girls are being targeted here. Karni Sena was not able to get any solid evidence of these claims which is why we had not given any statement on this matter till now. But now it’s all open”, Sachin added.

The place was inaugurated by BJP MLA Mahesh Chandra Gupta who denied knowledge about the inappropriate activities going on there. He also emphasized that the inauguration ceremony was a mere formality and the place was a family restaurant during the ceremony. But elected representatives inaugurating such establishments without verifying the antecedents of the owners goes to show how hollow our current electoral system has become.

The hookah bar is located in Badaun District’s New Sarai Kacchi League area. It was only after it was sealed and owner Arbaz Khan was arrested on September 12 that the neighbours came to know about the place. The police are probing the video to ascertain whether it is from September 12 or earlier. Further investigations are ongoing.