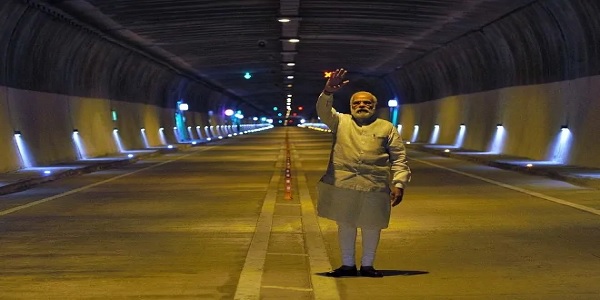 Bharat the world’s fastest growing major economy has enormous untapped economic potentials critical for the development of the nation. Absence of robust modern pro-21st century infrastructure has dragged country’s growth forcing it slower down. With huge population, comes huge demand and to fulfil such demands, concrete manufacturing and supply structure is required.

This government has also done tremendously well on building megastructures to suffice nation’s mega demands. From thousands of kilometres of road project to long and high bridges to futuristic rail projects, the government has reflected and resonated with country’s growing ambitions. Apart from sophisticated planning and huge funding, the government has blazed a trail in implementation also.

Bharatmala, is a centrally funded mega roads and highways project aimed at enhancing robust infrastructure connectivity in the nation and at espousing futuristic 21st century economic needs of the nation. The total investment for the project is Rs 5.5 lakh crore, making it one of the largest road outlay project of the world. The project include construction of highways connectivity in most of the northern, western, eastern and north-eastern states especially improving connectivity in the tribal and backward areas.

The Bharatmala project will significantly improve highway infrastructure. It will increase the National Corridors from current 6 to 50 including 44 Economic Corridors when completed. It will increase freight traffic on national highways from current 40% to 80% and will connect around 550 district to minimum 4 lane highways from the current 300 districts.

Bharat is a country surrounded by waters on the three sides. The nation has huge economic potential in it’s long 7,500 km coastline untapped due to lack of critical infrastructure. The Sagarmala Pariyojana is an initiative of the central government to unlock the incredible coastal and shipping potential of the country, by building the required robust infrastructure.

The Chardham Mahamarg Vikas Pariyojna, or the Chardham highway development project, is an ambitious initiative to improve connectivity to the Char Dham pilgrimage centres in the Himalayas. The project’s main objective is to develop around 900 km of national highways. These highways will be built in Uttarakhand at an approximate cost of Rs 12,000 crore.

The Rs 50,800-crore Sethu Bharatam project aims to ensure highways without railway crossings by 2019 and overhaul of 1,500 British-era bridges. Under the project, 208 railway crossings will be replaced by rail over bridges (ROBs) by 2019 at an estimated cost of Rs 20,800 crore. Also, 1,500 bridges of the British era across the country will be overhauled for around Rs 30,000 crore.

Expressway (WPE) and Eastern Peripheral Expressway (EPE). It is the first access control expressway of the country comprising of two expressways. The expressway forms a ring road around the Delhi with the length of 270 km and allows the bypass for traffic moment for Delhi and headed towards the states of UP, Uttarakhand, Punjab, Haryana, and JK. The project will decongest Delhi and is being built at a cost of over Rs 11000 crore. The government has inaugurated EPE in 2017.

Another major expressway project by the government is the Delhi-Meerut expressway. The 96 km expressway connecting Delhi with UP’s Meerut to ease traffic congestion in the national capital region, is Bharat’s widest highway with 14 lanes. The project, estimated at around Rs 8,000 to 10,000 crores, was built in four phases.

Union Minister Nitin Gadkari by calling the project historic said “For the first time in the history of NHAI, we are building an expressway of 14 lanes… It will ease traffic congestion and help reduce pollution in Delhi,”.

DMIC is a planned industrial development project between Bharat’s capital, Delhi and its financial hub, Mumbai. It is one of the world’s largest infrastructure projects with an estimated investment of US$90 billion and is planned as a high-tech industrial zone spread across six states, as well as Delhi, the national capital and itself a Union Territory. The investments will be spread across the 1,500 km long Western Dedicated Freight Corridor which will serve as the industrial corridor’s transportation backbone.

It includes 24 industrial regions, eight smart cities, two international airports, five power projects, two mass rapid transit systems, and two logistical hubs. The eight investment regions proposed to be developed in Phase I of DMIC are Dadri-Noida-Ghaziabad (in UP), Manesar-Bawal (in Haryana), Khushkhera-Bhiwadi-Neemrana and Jodhpur-Pali-Marwar (in Rajasthan), Pithampur-Dhar-Mhow (in MP), Ahmedabad-Dholera Special Investment Region (SIR) in Gujarat, the Shendra-Bidkin Industrial Park, and Dighi Port Industrial Area in Maharashtra. The project has received a major boost from Bharat and Japan, due to an agreement to set up a project development fund with an initial size of Rs 1,000 crore (US$144.7 million).

Conceived as a global manufacturing and trading hub, the project is expected to double employment potential, triple industrial output and quadruple exports from the region in five years.

For the nation to reach new heights and accomplish greater goals of development, it needs to accelerate faster. The Modi government understood the call for setting up a futuristic and pro-21st century high speed rail infrastructure for the accelerating nation’s growth. The National High Speed Rail Corporation Limited (abbreviated as NHSRCL) is the corporation established by Modi government for building countrywide high speed rail network.

The first such project by NHSRCL is the Mumbai-Ahmedabad High Speed rail project which include a 508.5 km high speed rail line connecting Bharat’s commercial hub Mumbai to Gujarat’s Ahmedabad. The route include 1435 mm tracks of Japanese E5 Shinkansen bullet train and 12 stations across the parts of two states and one union territory. The project is predominantly indigenous with 20% technical equipments provided by Japan and 81% of the financial aid provided by Japanese government’s body JICA.

The project is estimated to cost Rs 1.1 lakh crore (US $16 billion) out of which JICA agreed to fund Rs 88,087 crores on through a 50-year loan at an interest rate of 0.1% with a moratorium on repayments up to 15 years. The project is one of its kind and will prove put to be extremely vital for the nation’s transformation. Estimated to be completed by 2022, the project is the flag bearer of Modi government’s mega infrastructure projects.

The government is building the tallest bridge in the world over river Chenab at Doda (359 metre above the river). The bridge would be built at a cost of Rs 1198 crore. After construction, it will surpass the current record held by Beipan river Shuibai railway bridge (275m) in Guizhou province of China.

This bridge has been designed to withstand wind speeds of up to 260 km per hour and is being termed as an engineering marvel that will connect Bakkal (Katra) and Kauri (Srinagar). The bridge stands high as Bharat’s ambitions and stands firm as Bharat’s determination for development.

The Rs 6000 crore Zojila pass tunnel project aims to provide all-weather connectivity between Kashmir and Ladakh which remains cut off from the rest of the world during winters. The project has been bid several times but has been in controversy due to either no bidders coming forward or charges of ‘favouritism’.

This government took bold steps to kick start the project which will drastically bring a transformation in the region’s all weather connectivity with the mainland. Cutting through the heart of the Himalayan ranges, the project is also an epitome of Bharat’s engineering finesse.

The Mumbai trans harbour link project is a project to build sea overbridge connecting two significant parts of coastal city of Mumbai. This will be country’s longest sea bridge at 22.5 km. It will connect Mumbai’s eastern suburbs with the mainland across the harbour through a 16.5 km sea bridge and a viaduct.

The project will cost around Rs18,000 crore and completed by 2019. It will connect Sewri in central-east Mumbai with Nhava Seva across the harbour. The BJP government is also building a Rs 3600 crore grand memorial of Chhatrapati Shivaji in Mumbai, which when complete will be new World’s tallest statue triumphing over the current Statue of Unity in Gujarat.

Government-owned Bharatiya Oil Corporation (IOC) is laying Bharat’s longest LPG pipeline from Kandla coast in Gujarat to Gorakhpur in eastern Uttar Pradesh. The 1987-km pipeline will carry 3.75 million tons per year of LPG and move from Kandla to Gorakhpur via Ahmedabad, Ujjain, Bhopal, Kanpur, Allahabad, Varanasi and Lucknow. The project will be prudently transformative considering the nation’s growing economic and energy demands.

The Rivers Inter-link is a proposed large-scale infrastructure project to effectively manage water resources by linking rivers with a network of reservoirs and canals, which also reduce persistent floods. The government has started working on three river interlinking projects, Ken-Betwa, Par-Tapi-Narmada, and Damanganga-Pinjal. The projects will cost the government around 40,000 crores and the latest technology will be used in their construction. Apart from addressing  severe water scarcity problems, the project will also aid in agriculture and long term economic development of the region.