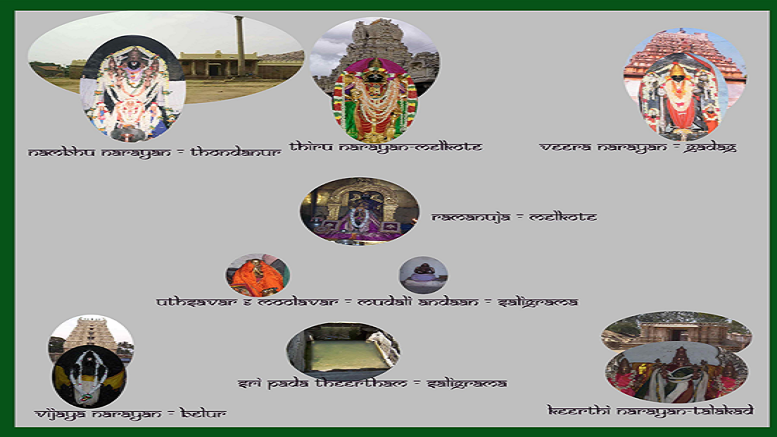 At the end of Dwapara Yuga, with the victory of the Devas over the Asuras,Indra was afflicted with the sin of Brahma hatya. To redeem himself, he performed tapasya. Bhagavan Vishnu asked him to install five different murtis in five different places.The temples were built by the Hoysala ruler Vishnuvardhana with the blessings of Sri Ramanujacharya after he healed the king’s daughter from a disease.

This is the first and the oldest of these temples. The Vishishtadvaita philosopher Sri Ramanujacharya had to escape from the Chola king, who was a Shaiva and wanted the great acharya to submit to his views, even if it meant using force. He stayed at the house of his disciple Thennur Nambi.

Thondanur was the second capital of the Hoysala empire then, the ruler Bittideva , a practising Jain, was looking for someone to cure his daughter who was suffering from an evil spirit. Sri Ramanujacharya advised the king to tell her to take a dip in the nearby Pancha Apsara Thatakam and then go to the Yoga Narasimha temple on the hilltop.He then took the Narasimha danda (a stick used by Bhagavan Narasimha) and tapped her which cured her. Bittideva, being impressed,converted to Vaishnavism and became Vishnuvardhana.

The murti is an unusual 18ft, which is a deviation from Agama shastras, with the upper right hand bearing the Shankha and the left hand bearing the Chakra due to the devotion of Nambi Thennur. The temple is an incredible mix of Chola as well as Hoysala architecture. Maa Aravindanayaki also blesses us in this huge temple complex with 4 arms in the second praharam. Ramanujacharya is depicted with Adishesha over his head.

This is the second and most prominent temple in Pandavapura Taluk of Mandya district. It is located on the Yadugiri hills (Vedadri in Satya Yuga,Narayanadri in Treta Yuga,Yadavadri in Dwapara Yuga and Yadugiri in Kali Yuga.)

The murti was actually created by Vishnu himself  for Sanatkumara on Brahma’s request.The murti was installed in Melukote as Thirunarayana. Dattatreya taught the Vedas to many students, including Prahlada.

Brahma requested for a smaller set of murtis, which were given to Rama in Treta Yuga after the Ranganatha murti he worshipped was installed in Srirangam as per the wish of Vibhishana. The new deity was called Ramapriya because of Rama’s love for it. The murti set was passed on to the Yadava dynasty through his son Kusha. Balarama and Krishna put the Utsava Murti along with the Moolavar in Melukote after seeing the similarity.

However, in Kali Yuga, the processional deity was taken by the Muslim invaders who were iconoclasts. However, the daughter of the ruler loved the murti so much. An anxious Ramanujacharya called out to the deity as Chella Pillai which ran to him like a small child out of joy. However, the girl went along with the great saint and became one with the Supreme after serving the deity.

The Moolavar has four hands bearing Shanka,Chakra, Gada with Maa Yadugiri Nachiyar by his side along with a murti of Ramanujacharya made of Panchaloha. The temple water tanks are called Akka Thangi kulam which are sweet and salty. The utsava murthis are also present.

This is the third temple,situated in the town of Gadag in Gadag district. This temple also follows the Hoysala type of architecture with some Vijayanagara and Chalukya methods incorporated. The great poet Kumaravyasa wrote his famous Kannada poem Gadugina Bharata leaning on a particular pillar of the temple while the clothes he wore dried after taking a bath.

The eight feet tall deity is four armed,holding the Chakra, Shanka, Gada and Padma exactly like Guruvayurappa. The attire or veshas he wears show that he is ready for battle, hence the name Veeranarayana. The 1.5 feet murtis of Sridevi and Bhudevi stand by his side along with Garuda.

This is the fourth temple which is usually under sand for most of the year due to the curse of Alamelamma on the Wodeyar dynasty of Mysore.It is located on the banks of the pious Kaveri river.

In the sanctum at the Keerthinarayana temple, the nine-foot-tall image of Bhagwan with Shanka, Chakra and Gadha stands majestically on Garuda Peeta. Nearby is the well-known Lakshminarayana temple. He here is seen having a balance and kundumani in His hands. The place is revered as sacred as Kashi. The main temple premise is also installed by murtis of Ramanujar, Nammalwar and Vedantha Deshikar. One will also see the murtis of Yoga Narasimhar in the ardha mandapa.

This is the fifth and final temple,also having as much prominence as the previous four temples. The kind of architecture here is so wonderful that mere words cannot describe the beauty and grandeur,

As one enters this vast complex, a large rajagopuram or gate arches above. The centre-piece of the temple sits in the centre, facing the east, following the most followed orientation of temple architecture.The sanctum sanctorum has a 6ft murti of Narayana flanked by Lakshmi and Bhudevi.

On the right of the temple is the Kappe Chennigaraya temple and a smaller temple dedicated to a Lakshmi reincarnation, devi Sowmyanayaki, sits slightly behind the two. On the left of the Chennakeshava temple, one can find the Ranganayaki temple.

Attractions in the temple complex include two ornate pillars, one of the Garuda and one with a lamp. The former was built during the Vijayanagara period and the latter is attributed to the Hoysala period.

The pillars of the temple exhibit some of the best details and finishing of sculpture and art work in the entire complex. The Narasimha pillar is one of the most popular of these temple pillars. There are a total of 48 pillars, all uniquely carved and decorated. The four central pillars were hand chiselled by artisans and feature madanikas or celestial damsels. The madanikas are in different poses and some of the popular ones which gain the attraction of tourists and art enthusiasts include the lady with a parrot and the huntress.

1. Vairamudi Brahmotsavam is the most popular festival in Melukote when the Utsava Murthi is adorned with the diamond crown, which cannot be seen by the archakas before the deity wears it. He is adorned with 12 different types of flowers, fruits too.

2. Devara Padam is seen before the cave entrance on the hills in Melukote.

3. All the murtis are self-manifested or Svayambhu.

4. Sanatkumara,Rama,Krishna and Balarama have prayed to Sri Thirunarayana in different Yugas.

5. The AkkaThangi kulam tanks in Melukote have sweet and saline water which is highly unusual.

6. Yoga Narasimha murthy at the  temple in Thondanur has a staff or danda in his hand which is again very unusual.

7. The Parthasarathy temple at Thondanur was built and was consecrated by Yudhisthira himself.

8. The Tirumalasagara lake in Thondanur is very holy to free people from Brahma Rakshasa dosha.

9. Kumaravyasa wrote the poem in Veeranarayana temple after Ashwatthama, disguised as a Brahmin told him the first ten Parvas.

10. The murti of Bibi Nachiyar, the daughter of the Muslim ruler, is at the feet of Ramapriya Chella Pillai due to her devotion for him.

11. The Rajagopuram of Thirunarayana temple has pillars which do not rest on the ground.