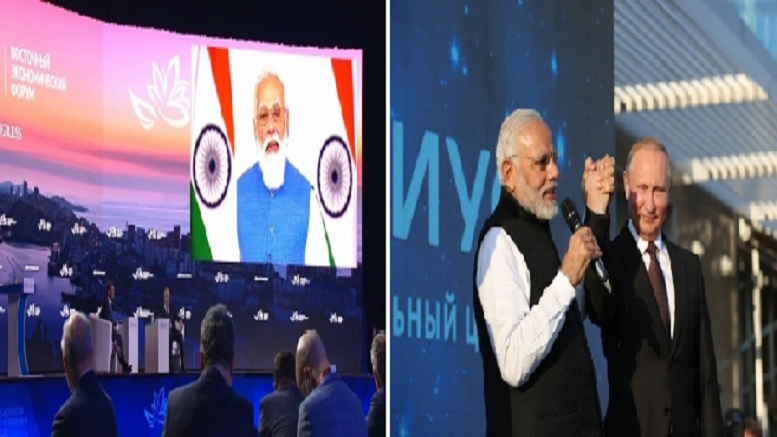 With December 6 inching closer, Bharat and Russia are warming up to the first face-to-face meeting between Prime Minister Narendra Modi and the Russian President Vladimir Putin in more than two years.

Putin will be in New Delhi this weekend to attend the 21st India-Russia Annual Summit as the two leaders meet for the first time since the BRICS Summit in Brasilia in November 2019.

In an expanded meeting of the Russian Foreign Ministry Board on November 18, which was devoted to the implementation of national foreign policy and future tasks of Russian diplomacy, Putin stressed the significance of Russia-India Special and Privileged Strategic Partnership in the fast-changing global scenario.

He remarked that, just like with China, Russia adheres to similar approaches in relations with its “especially privileged” strategic partner – Bharat.

“We intend to build up truly multifaceted bilateral cooperation. We regard India as one of the strong independent centers of a multipolar world with a foreign policy philosophy and priorities that are close to us,” said Putin.

The Modi-Putin camaraderie has been on display before the Covid-19 pandemic and even during the six telephonic conversations and virtual meetings between the two leaders since that meeting in Brasilia.

While virtually addressing the Eastern Economic Forum-2021 (EEF) in September, PM Modi had called President Putin “a great friend of India” under whose guidance the strategic partnership between the two countries continues to grow from strength to strength.

It has been for months now that External Affairs Minister S Jaishankar and his Russian counterpart Sergey Lavrov along with National Security Advisor Ajit Doval and Secretary of the Russian Security Council Nikolay Patrushev had been laying the groundwork for the key high-level dialogue.

During the talks, the two sides are expected to focus on the further development of relations of especially privileged strategic partnership between the two countries and also exchange opinions on current topics on the international agenda, including the joint work within G20, BRICS, and the SCO.

As part of its ‘Act Far-East’ policy, Bharat has also affirmed its commitment of remaining Moscow’s reliable partner in realizing Putin’s vision for the development of Russia’s Far East.

As PM Modi addressed the plenary session of the EEF Summit virtually, Minister of Petroleum and Natural Gas Hardeep Puri was in Vladivostok, discussing the collaboration between Bharatiya and Russian companies in that region.

In September 2019, while visiting the Pacific port city for the same forum as a chief guest, PM Modi had said that together, Bharat and Russia will cross the distances of space and also bring out prosperity from the depths of the sea.

Two years down the line, New Delhi and Moscow can now boast of having a robust and growing bilateral energy cooperation which is a key pillar of the special partnership.

Russia is the largest investment destination for the Indian oil and gas companies. Bharatiya public sector companies have made investments in Russia of about US$ 16 billion, including in the Far East and East Siberia, in oil and gas assets such as Sakhalin-1, Vankor and Taas-Yuryakh.

Russia is also the largest investor in Bharat’s oil and gas sector with Bharat encouraging further investments by Russian companies as Puri held discussions with country’s energy majors including Rosneft, GazpromNeft and Sibur.

“In Indian history and civilization the word ‘Sangam’ has a special meaning. It means confluence or coming together of rivers, people or ideas. In my view, Vladivostok is truly a ‘Sangam’ of Eurasia and the Pacific,” PM Modi had said during his address in September.

The International North-South Corridor connectivity project, which PM Modi had said in 2019 will bring Bharat and Russia physically closer to each other, also hit a major milestone recently.

Sailing through the icy Northern Sea Route, which could become a major shipping lane in future, a carrier delivered liquefied natural gas from Novateks’s Yamal plant to GAIL’s Dabhol terminal in the Ratnagiri district of Maharashtra, last month.

Bharat’s planned contribution to the development of resource-rich Russian Far East is only expected to rise further after Modi and Putin end their summit next week.