A blue MMLP Quadrilateral in the BBIN sub-region 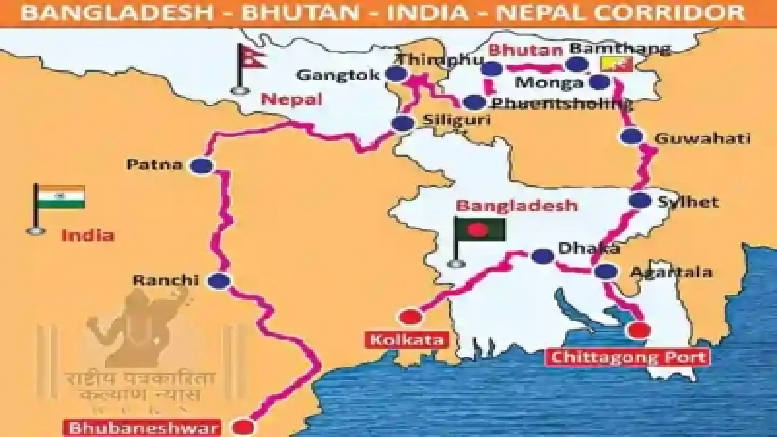 A number of freight quadrilaterals/initiatives connecting major economic centers of Bharat, viz. ‘Golden Quadrilateral’, a network of upgraded highways, ‘Diamond Quadrilateral’, a network of high-speed railways, the dedicated railway freight corridors, the Sagarmala project for boosting coastal shipping, etc. have largely optimized transportation planning in the country. Now, the system demands similar networks connecting economic and logistic hubs facilitating domestic and global trade.
Bharat proposes a Multi-modal Logistics Parks (MMLPs) grid to cater to this need. The Cabinet Committee on Economic Affairs had mandated the Ministry of Road Transport and Highways to develop 35 MMLPs across Bharat as a part of the ‘Bharatmala Pariyojana’. The locations are envisioned at and near various economic hubs such as Chennai, Bangalore, Indore, Pune, Ahmedabad, among others.

Prioritizing these investments in line with Bharat’s foreign trade policy could be the foundation for our future infrastructure planning. Here it is important to mention that our neighbouring countries, viz. Bangladesh, Bhutan and Nepal, are also progressing towards regional integration with a special focus on multi-modal connectivity. Under the Bangladesh-Bhutan-India-Nepal (BBIN) initiative, various agreements have been signed to enhance the use of water connectivity.
A set of four MMLPs connected majorly via waterways can be a sustainable way to boost BBIN trade and connectivity.
Bharat is well connected by waterways with Bangladesh and hence, the same needs to be leveraged. Bhutan and Nepal are landlocked countries and thus, depend heavily on Bharat and Bangladesh for their international transportation. An optimised water-road-rail network can be the most favoured option.
The Centre is undertaking several initiatives nationally and bilaterally with Bangladesh to develop its National Waterways 1 and 2 (the Ganga and the Brahmaputra), and the India-Bangladesh Protocol (IBP) routes, which have the potential to provide a blue link to the BBIN sub-region. Jogighopa in Assam has been chosen as Bharat’s first MMLP and will be connected to road, rail, air and water. It is poised to divert cargo from roadways to waterways in the region, which will significantly decongest the Siliguri corridor.
Therefore, along with Jogighopa, three other locations – Sahibganj (Jharkhand, Bharat), Tribeni-Balagarh (West Bengal, Bharat) and Ashuganj (Chittagong division, Bangladesh) can form a MMLP quadrilateral serving as hubs of the BBIN trade and connectivity network.
Sahibganj is Bharat’s second of the three multi-modal terminals under the Jal Marg Vikas Project. Tribeni, located along the Hoogly River, has been declared as an Extended Port of Call in the Second Addendum to Protocol on Inland Water Transit and Trade (PIWTT) between Bharat and Bangladesh. Ashuganj is a designated Port of call in the PIWTT and is one of the most critical industrial ports of the Bengal delta.
This quadrilateral is expected to increase the volume of trade in the sub-region including extending to other parts of South Asia, leading to more employment opportunities and also more affordable prices of products for consumers. It will significantly lead to shift of cargo traffic from road to water and will contribute in achieving reduced logistics cost, making our trade more competitive. It would also set in motion a better of utilisation of the IBP routes for trade and transportation.
Thus, the four points (MMLPs) located in Bharat and Bangladesh and also linked with the National Waterways 1 and 2 of Bharat can usher a new direction to sub-regional cooperation among the BBIN countries – forming a “Blue MMLP Quadrilateral”, facilitating seamless connectivity in the sub-region.
Bhutan and Nepal will benefit too. They have agreements with Bharat and Bangladesh to use inland waterways for its transit, bilateral and international. Bharat has given its consent to Nepal’s access to Kolkata-Kalughat-Raxaul, Kolkata-Sahibganj-Biratnagar and Kolkata-Varanasi-Raxaul routes. Similarly, Dhubri, Jogighopa and Pandu, located in Assam along the Brahmaputra River, are included in the trade routes for Bhutan’s bilateral and transit trade with Bharat and to Bangladesh and the rest of the world. The objective of all these initiatives is to lower the high logistics cost and skewed multi-modal mix dominated by costly and congested roadways.
Using waterways is greener, cheaper and provides various other benefits when compared to other modes of transportation. Thus, while advancing with the construction of MMLPs, it will be instrumental for the government to prioritise establishing them towards trade lanes, connecting them with inland waterways and/or the India-Bangladesh Protocol (IBP) routes, preferably closer to Bhutan and Nepal.
There is also a need to upgrade and maintain the navigability of these routes with sufficient infrastructure. A network of MMLPs along with a hub-and-spokes model of roadways/railways at these four locations enabling first and last mile connectivity could change the face of trade and transportation in the BBIN sub-region.
Jogighopa would facilitate Bhutan and northeast Bharat; Sahibganj for Nepal and eastern and northern Bharat; Tribeni-Balagarh for eastern Bharat and Bangladesh; and Ashuganj for Bangladesh and Northeast Bharat.
Goods from Nepal and eastern and northern Bharat can reach Sahibganj through roadways and thereafter can be sent to Bangladesh via waterways. Bhutan has access to use Jogighopa for trade and transit. Ashuganj and Jogighopa are connected via the IBP route. Ashuganj is a very strategic location as it is also close to Karimganj and could facilitate trade and transportation with Mizoram, Tripura and Manipur. Alternatively, Ashuganj and Jogighopa could also be connected via a multi-modal route where cargo from Jogighopa can be transferred to Karimganj via road and from Karimganj to Ashuganj via the IBP route.
In order to accomplish this, there is an urgent need to create a political economy discourse among the relevant stakeholders of the BBIN countries. Most importantly, there must be logistics coordination with minimum infrastructural investments, keeping in mind various local factors to bridge administrative, cultural, geographical, economical, and ecological distances. In the medium- to long-term, this can prove to be a game changer for a better modal mix and enhancing logistics competence in the BBIN sub-region.