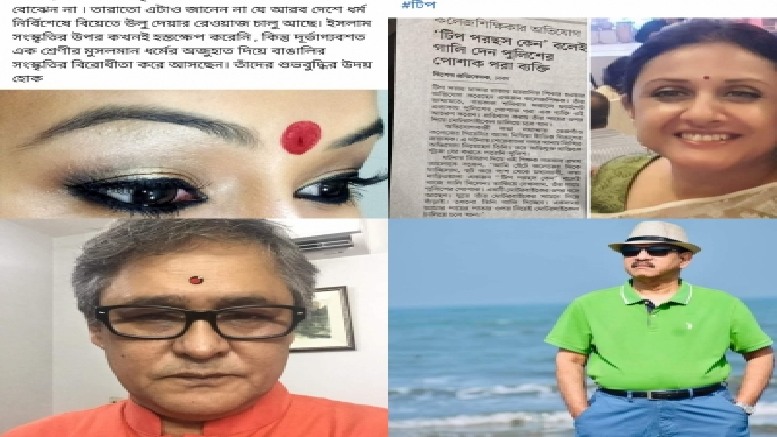 A Bangaldeshi police constable harassing a woman for wearing a bindi has drawn widespread criticism, with some demanding harsh punishment for the accused.

On April 2, Lata Samaddar, a lecturer of theatre and media studies at Dhaka’s Tejgaon College, filed a complaint alleging that she was harassed in broad daylight by the policeman in the capital city’s Sher-e-Bangla Nagar area.

“When I was walking towards the college, a middle-aged long bearded man hurled abuse at me saying ‘Why are you wearing a tip (bindi)?’ I turned around and found the man sitting on a motorcycle, wearing police uniform,” she said in her complaint.

Actress and MP Suborna Mustafa discussed the incident in Parliament on Sunday, demanding that action be taken against the harasser.

Human rights activist Nurjahan Khan told IANS on Monday that the incident was a form of the ongoing communalism being carried out by a section of police administration.

She also demanded exemplary punishment for the accused.

Advocate Rana Dasgupta said: “The identity of the police officer should be exposed, he should be punished. If we don’t get rid of this situation, the future of Bangladesh is definitely dark.”

Leaders of the Bangladesh Hindu Buddhist Christian Oikya Parishad demanded the arrest of the police constable.

AT Ahmedul Huq Chowdhury, a veteran freedom fighter, told IANS that most of the police officials need long term counselling to behave in a proper term.

Bikram Kishore Tripura, the secretary and former Additional Inspector General of Police, said: “For the sake of the service the delinquent police officer should be identified and departmentally proceeded immediately.”

Activist and poet Imtiaz Mahmood protested by posting a photo on social media of him wearing a bindi on his forehead.