Sudan Coup: Generals and Islamists Prevail in the Arab World 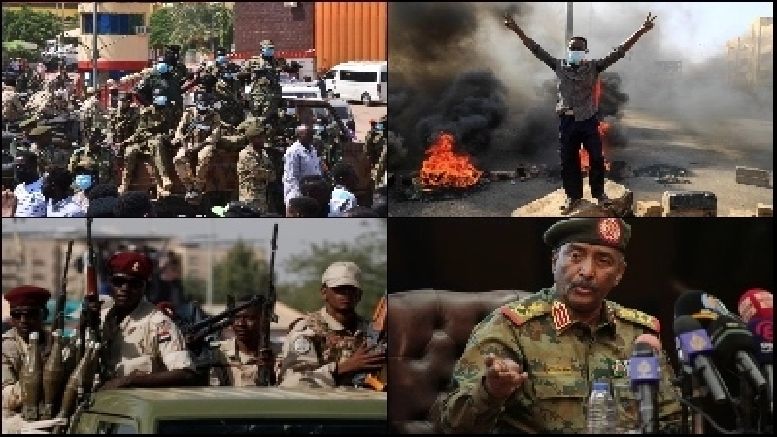 A coup has taken place in Sudan. In a series of moves on the morning of October 25 straight from the well-thumbed handbook of Arab military takeovers, Sudanese military forces  stormed the country’s state broadcaster. At an unspecified hour, Prime Minister Abdalla Hamdok and a number of his ministers were taken into custody by the military. The coup’s leader and apparent instigator, Commander-in-Chief of the Armed Forces Lieutenant-General Abdel Fattah al-Burhan, then delivered a televised address in which he announced that an “independent and fair representative government” would hold power until elections, to be held in 2023.

The 14-member Sovereignty Council, which had acted as the collective head of state since the ousting of President Omar Hassan Ahmad al-Bashir in August 2019, has been dissolved by the military.

The council consisted of both military and civilian members, chaired by al-Burhan himself. The deputy chair was General Mohamed Hamdan Dagalo, commander of the army’s Rapid Support Forces. The two had been scheduled, however, to hand over leadership of the council to civilian leaders in January 2022. The handover was stipulated by the draft constitutional declaration of 2019, which followed the toppling of al-Bashir. This week’s coup nullifies this procedure, ushering in the full domination of government by the armed forces.

As of now, demonstrations have taken place against the coup in a number of cities, including the capital, Khartoum. Several people have been killed. Hamdok has been released from custody. The coup has been condemned by a number of Western countries, including the US and the UK, and a US State Department spokesperson announced the freezing of $700 million in economic support to the country.

US-based Lebanese journalist Hussein Abdul Hussein noted in an article written in response to the coup, “Change has come to predominantly Arab countries in different shapes and forms … The result in all these countries, however, has been the same: either civil war or the reestablishment of autocracy.”

It is indeed the case that efforts at establishing stable and representative rule in majority Arabic-speaking countries have proven universally unsuccessful. Hussein points to the “absence” of the “popular culture that can sustain the building and maintaining of a modern state.”

The forces in the Arab world committed to the establishment of representative government remain weak and defeated.

Indeed, in every Arab state, these feeble groupings find themselves pushed aside by the two powerful elements that are the only true competitors for power in the Arab world at the present time: the forces of political Islam, and those of the old, autocratic Arab order, as represented by the military, and the monarchies. This general rule is also visible in Sudan.

In my book The Transforming Fire, I wrote in 2011 that “for the moment, it is this order or the Islamists – there is no third way.” The statement was written on the eve of the Arab Spring. Nothing that has taken place in the subsequent decade makes its revision necessary. The coup in Sudan this week further confirms that the present options for governance in the Arab world are the generals and kings – or the Islamists.

In Sudan, the Omar al-Bashir regime came to power in 1989 in alliance with the Islamist, Muslim Brotherhood-influenced National Islamic Front of Hassan Turabi. The two parted company a decade later, but al-Bashir maintained the pro-Islamist orientation of his regime.

Al-Bashir domiciled Osama Bin-Laden in the 1990s. He also aligned closely with Iran, allowing Sudan to be used as a conduit for arms transfers to both Hamas in Gaza and Hezbollah in Lebanon. Islamists controlled the military, intelligence services and other key ministries under Bashir.

After a short hiatus of mixed military and civilian rule, and hopes for representative governance, forces loyal to al-Bashir attempted a putsch in September 2021, and were crushed. The pendulum has now swung back to open control by the military.

In Tunisia, the military regime of Zine El Abidine Ben Ali was toppled in late 2010, and Ben Ali was replaced by an elected Islamist government. A period of relative stability followed, which was then followed by less stability, and then the use of the army by President Kais Saed to close parliament in July, following violent demonstrations against the government. As of now, Saed rules by decree, with the backing of the military.

In Libya, the Western toppling of military dictator Muammar Gaddafi led to the emergence of a Sunni Islamist-dominated government in Tripoli. This government is now opposed by a military uprising led by the Ancien Regime general Khalifa Haftar. As of now, this has led to the fragmentation of the country, with Haftar ruling a large enclave in the east of the country, from Tobruk.

In Syria, a Sunni Islamist uprising has been largely crushed by the Assad regime, with the help of Russia and Iran. An enclave controlled by Sunni Islamists backed by Turkey holds on in the northwest.

In Yemen, the country has divided into rival enclaves following the deposing of a military dictator, controlled by Iran-backed Shia Islamists and the Gulf monarchies of Saudi Arabia and the UAE.

In Lebanon, an Iran-supported Shia Islamist force rules, from within the husk of formal representative government.

In Iraq, a similar effort by Iran-supported forces is challenged because of the power of local Shia Islamist forces resisting the encroaching dominance of Tehran.

And so on. This pattern is currently without exception in the Arab world: Islamists, or generals/monarchs, or war between them. It has just been reaffirmed in Sudan, with the generals currently in ascendance.

In parentheses, it should be noted that two partial exceptions, which exactly prove the rule, are the Kurdish enclaves in northern Syria and northern Iraq. In both these areas, a sort of authoritarian semi-democracy prevails. They prove the rule because these are examples of non-Arab regional governance.

What implications do the Sudan coup and the broader pattern of which it is a part have for Israel?

Re the former, Burhan met with then prime minister Benjamin Netanyahu in February 2020. Burhan is close to Egyptian President Abdel Fattah al-Sisi, with whom he enjoys a longstanding friendship. His powerful deputy, General Mohamed Dagalo, meanwhile, enjoys the patronage of the UAE and Saudi Arabia. The coup thus represents that regional element to which Israel is closest. There is no reason to suppose negative effects for Jerusalem: “Normalization” was proceeding slowly in Sudan in any case, but the coup will not knock it off course.

Regarding the broader regional context: in the apparent absence of any capacity in the Arab world for the development and consolidation of genuine representative institutions and civil society, the prevalence of authoritarian rule over Islamist insurgency and chaos is clearly preferable.

So Burhan’s coup follows the identifiable regional trend. It might be advisable for the British, American and other Western governments currently condemning the coup to acquaint themselves with this reality. Hoping for this, however, would arguably be a display of a type of utopian optimism more usually found among the advocates of democracy in the Arab world.

(This article was published on meforum.org and has been reproduced with a modified headline.)