Pakistan’s Eid gift to Baluchistan in Chaman : repression will only flame the disturbed province 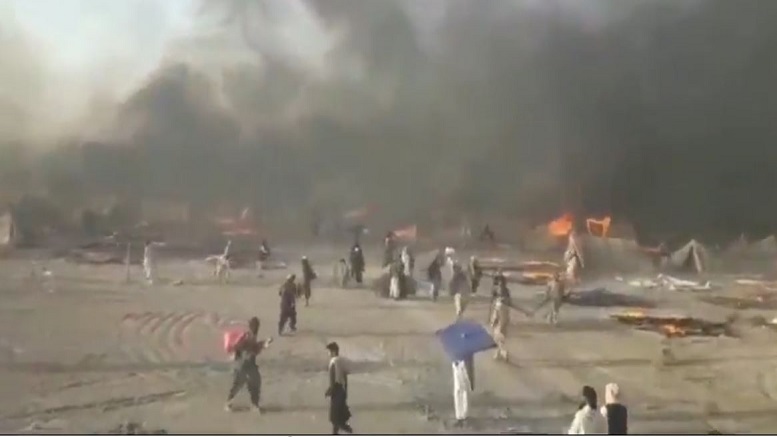 On one hand, as Pakistan prepares to observe “Black Day” on 5th August to observe the first anniversary of repeal of Article 370 by Bharat, its security forces Eid gift to Baluchistan in Chaman exposes the duplicity of the country. Pakistan’s dominant ethnic-linguistic group is Punjabis. They dominate the politics and more importantly, the army of  Pakistan. Punjabis have been successively headed Pakistani Army since 2007. They account for 56% of the population of Pakistan, but the power they hold is disproportionate to their population.

Indeed, there have been continuous voices from other parts of Pakistan that Punjabis have basically colonized them. Nowhere does this accusation ring truer than in Balochistan. It is geographically the biggest province of Pakistan and covers almost half the land area of the country. Due to the difficult terrain, only 4% of the Pakistani population lives there. Its northern part has a border with Afghanistan and southern part with Iran in the west. The north is also populated by significant population of Pashtuns.

On July 30th, near the border town of Chaman, some Pashtuns were trying to cross into Afghanistan. Many probably wanted to visit their homes in Afghanistan for the festival of Eid and many others were laborers, who were stuck in Pakistan for many days. On being stopped by the Pakistan security forces, they started a peaceful sit-in near the border. Many Afghans also gathered at the other side of the border in their support. The Pakistani security forces started firing after some altercation with the protesters.

FC attacked Chaman sit-in & started straight firing on protestors in which more than 20 are critically injured & one woman died on spot. Pashtuns are under security & economic blockade. #StateAttackedChamanSitIn https://t.co/IEfQ20dn43

It was reported that at least 4 protesters have died and more than 20 are now critically injured. Afghanistan has further said that 15 people were killed and 80 injured within Afghanistan due to Pakistani fire. This also led to clashes between Afghan and Pakistani security forces. This Eid gift to Baluchistan has widely been condemned by people of Balochistan and Afghanistan.

The Pashtuns are an ethnic minority in Pakistan. The three crore Pashtuns of Pakistan are concentrated in the Khyber-Pakhtunwa province and Balochistan. They are ethnically and linguistically same as Pashtuns of Afghanistan. Indeed, Afghanistan claims the territory of Khyber Pakhtunwa and there have been repeated clashes between Afghan and Pak forces along Durand line.

Historically, the area became part of Pakistan due to the Durand line, which was imposed on Afghanistan by the British during their Great Game with Russia. The border was quite porous and Pashtuns liked to freely move across until the Pak military recently fenced it. Khan Abdul Gaffar Khan, also called Badshah Khan or Frontier Gandhi was a towering figure among Pashtuns. When he died in 1988, he left a will to be buried in Jalalabad in Afghanistan, thus showing the unity of Pashtuns people. He is one of the few foreigners to be awarded Bharat Ratna.

Bharat has been the only stable democracy in the whole region. It should support the cause of democracy and the human rights of all oppressed minorities. In 2016, Prime Minister Modi showed his support to the Baloch cause from the Red Fort in his independence day speech.

Pakistan has repeatedly accused Bharat of fomenting insurgency in Balochistan. The only proof it could muster till now is the forced confession of Kulbhushan Jadhav, after its agencies kidnapped the Bharatiya national from Iran. Bharat could at least give asylum to Baloch nationalists and help them form a govt in exile. It already hosts a Tibetan govt in exile and Pakistan also openly supports Kashmiri seperatists. Thus this step is a low hanging fruit in diplomatic terms, but it will help the world hear the voices of Baloch and Pashtuns.

Chinese inroads in the Arabian Sea area are dependent on the China Pakistan Economic Corridor, which passes for considerable length from Balochistan. The resources of Balochistan are being used to benefit the two adversaries of Balochistan, one of whom is also in illegal possession of the whole state.

Pakistan took a totally different route towards diversity. While Bharat took the diversity and turned it into its strength by giving legitimacy to regional aspirations under federalism, recognizing 22 official languages in constitution and by institutionalizing democracy, Pakistan is an example of how one ethnicity dominated all others, one alien language was imposed on everyone and even nominal democracy was denied for most part.

As a result, Bangladesh separated in 1971 and there has been a continuous movement for independence in Balochistan. This recent clash is sure to have repercussions on the freedom movement of Baluchistan and on the Pashtun view of Pakistanis.

The continuing repression by Pakistan in Baluchistan will only make the Balochs more determined to fight Punjabi domination. Will leaders of Bharat show the will to support this struggle?