Give
HinduPost is the voice of Hindus. Support us. Protect Dharma
GIVE
23.1 C
Varanasi 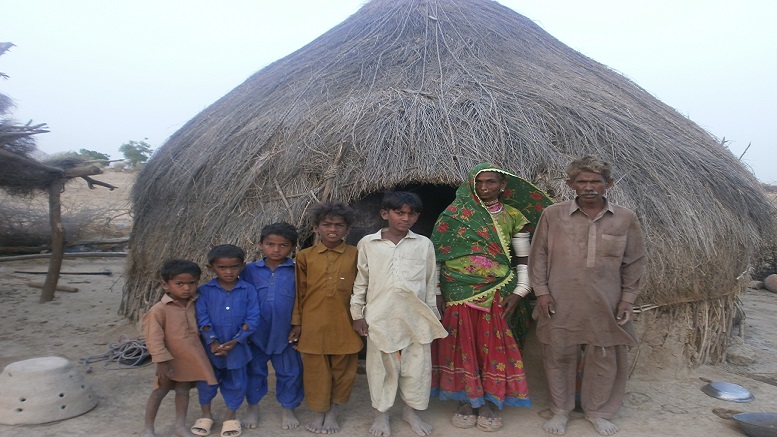 Tharparkar is a district of Sindh province in Pakistan where Hindus live in majority. Most of them are Bheels, Meghwar, Kolhi, Jogis and other marginalized communities within Hindus. The life status of these communities is extremely bad which is because of lack of good governance in this desert.

Tharparkar is a deserted area, that is why life of most of the residents of Tharparkar depends on rainfall which falls from June to mid-August. Sindh province of Pakistan is mainly divided into Northern and Southern Sindh; Tharparkar is situated in Southern Sindh and faces some issues of human rights violation like land grabbing, abduction, conversion, suicide of young generation due to lack of employment etc. The life for human beings in rural Tharparkar is a misery. No facility is fully available in this region whether it is health, education, water, mobile phone signals, proper public transportation or roads. There are a total of about 2600 villages in Tharparkar, that are spread over a total area of 22,000 square kilometers, among which more than 70% villages have no basic life facilities.

Majority of the people of Tharparkar from rural areas and marginalized groups have to migrate each year due to low rains and less agriculture production to barrage areas where agriculture is available, to earn a living for themselves and food for their livestock. It is very difficult for people to live without rains in Tharparkar. The economic condition of the people of Tharparkar from rural areas is very bad and most of them are unemployed due to less employment opportunities and zero concentration by the government.

This year, drought has been declared by Sindh government in Tharparkar. People have started migration to barrage areas with their livestock for a short period of two to three months, to cover their needs of food for themselves and their livestock.

While interviewing some residents of Tharparkar, it was informed by them that majority of the migrants to barrage areas from Thar desert take their children and families along, lock their houses and move to Badin, Hyderabad and Nawabshah, Mirpurkhas and Sanghar districts of Sindh province where water and agriculture is available. A few of the migrants from this desert move to barrage areas to earn a living, and after a month or so they leave their families back and then move back to the same areas or other with their livestock to make life easier for their family; they do so for the security of their families.

Those who migrate to barrage areas also have to suffer as the education of their children is neglected and these children start to contribute their parents in the cultivation of crops and collecting grass for their livestock so they are forced to leave education forever. Schools in these areas have the policy to admit a child after seeing an identity certificate which these poor Hindus often don’t have and are thus deprived of education.

Cases of rape with young Hindu girls and their abduction by landlords or their companions are also reported here; many of these cases go unreported as the victim’s family fears losing its ‘honor’. At times, police does not file a complaint and some of the cases which are reported are later on closed by parents due to life threats.

The government of Pakistan and other law enforcing agencies must think on these issues for a permanent solution to secure the rights of minorities. The world is working on Sustainable Development Goals which should also be the priority for Pakistan to make it a safe place for religious minorities living there.