Operation Dharmic Vote – The British General Election, the Dharmic Voter and the Law on Caste 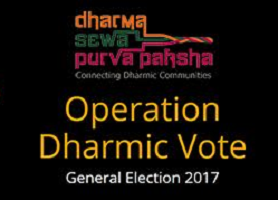 This reversal must extend to both the duty imposed to pass implementing legislation (Equality Act 2010, section 9(5)) and the case law (Tirkey v Chandhok). Both were brought in through the use of spurious claims and without evidence, and have the potential for serious damage to community relations.

A pending Government consultation closes on 17 July 2017. However, it forces respondents to make a choice between retention of the case law and implementation of the section 9(5) duty to make caste an aspect of race. The government prefers the retention of the case law option. That will result in caste being read into legislation wherever the word race appears, including the criminal law. No debate has ever taken place about extending criminal laws by the courts in this illegitimate manner.

The Government consultation already acknowledges that no satisfactory evidence supports any law on caste and correctly says that caste cannot be defined. It must follow through with the logical consequences of those observations and rid the public of the caste law and election candidates must now commit to that.

The Anti Caste Legislation Committee (ACLC), voicing the concerns of a wide cross-section of the community, regards both options as dangerous, with the potential to create conflict within the community, the encouragement of spurious claims, and foster attacks on the religious and associational freedoms of the community.

Minesh Patel, Head of the Harrow firm Law Partnership Solicitors represented the defendants in the Tirkey v Chandhok case. He observed, “I have seen an innocent couple not only lose their house after a claim was made on spurious grounds, but also made potentially liable for upwards of £250,000 in lawyers’ costs. That could happen to any member of the community. That case has now become the precedent on which caste claims are to be brought and which the Government appears to support. That cannot be right.”

In pledging to “Outlaw caste discrimination” in its manifesto, the LibDems have ignored the lack of evidence, the impossibility of implementation, and the havoc that would be caused for British communities. Conservative and Labour candidates have so far shown little solidarity with the community to repeal the legislation and case law. There has been much lip service, fobbing off the electorate with excuses, and blaming the community, which never asked for the law in the first place.

Prakash Shah, Reader in Culture and Law at Queen Mary, University of London and author of the report, ‘Britain’s Dharmic Communities and the General Election 2015’ says, “The level of ignorance among parliamentarians, many of whom actually supported the law, is staggering. The election provides an opportunity for the electorate, which appears to be increasingly likely to vote tactically, to put their candidates to the test. The caste law is probably the most important legal change likely to affect lives especially of Britain’s Indian community. The candidates I have spoken to seem to underplay or under-appreciate that.”

But Conservative MP Bob Blackman, who plans to see off competitors to his Harrow East seat, strongly supports repeal. “Having studied the Anti Caste Legislation Committee’s (ACLC) briefing papers on the potential impacts on individuals, businesses, community organisations and public authorities, and their assertion that case law could end up with adverse consequences, if re-elected, I would seek the support of the government and fellow MPs to repeal both the caste clause in the legislation and Parliament to overturn any adverse judgements in case law.”

Dharma Seva Purvapaksha media group leader, Mr Mukesh Naker, who is running Operation Dharmic Vote during GE2017, says he plans to take election candidates to task on their position on the caste law: “Those not providing adequate responses will have to face the electoral consequences. This is going to be an important issue in many marginal constituencies. Candidates are being brought up to speed on this and are generally reacting favourably once the facts are made clear. Some are still fudging the issue though. Political parties must take notice that they cannot take the Dharmic voter for granted as before. We are now dealing with a savvy generation.”

Dharma Sewa Purvapaksha (DSP) is a national policy and pressure group established in 2014 with the aim of promoting issues that affect or have an impact on Dharmic communities in the United Kingdom; Dharmic meaning all those communities that have their origins in the sub-continent of Bharat. In today’s terms these would constitute Hindu, Sikh and Jain faiths and communities.

Through the work undertaken by DSP, their research shows there are approx. 31 constituencies that the Dharmic voters could influence the outcome of a seat. Of these they are focusing on 15 seats. Through their interactions, these communities are telling them that they would like DSP to coordinate some key questions that they would like asked to all candidates, in order for them to be able to make an informed choice as to how they will vote. Operation Dharmic Vote (ODV) will evaluate the responses of candidates and recommend who to vote for.

As the June 2017 election battle rages, the law on caste is once again, as in GE2015, promising to become a bone of contention among the candidates and political parties. In the middle is the increasingly tactical Dharmic voter. The caste issue could well make all the difference in a few marginal seats to candidates of all political parties.

Dharma Sewa Purvapaksha (DSP) is committed to keeping the issue on the political radar and mobilising the community.

To learn more about Operation Dharmic Vote and to join this cause, please visit this page.