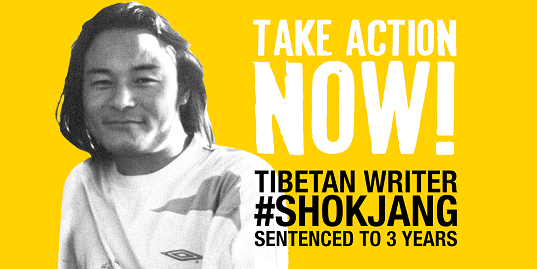 International Tibet Network (ITN) has issued a Joint Appeal Letter from Journalists and Writers to the President of China Xi Jinping for the immediate release of Shokjang, a Tibetan writer. He was detained by authorities in Tongren county (Qinghai Province) on 19 March 2015. A year later, he was sentenced on 17 February 2016 to three years in prison for ‘inciting separatism’; a charge that Shokjang has rejected and will likely appeal in court.

We, the undersigned writers and journalists, are writing to urge you to release our colleague/fellow writer, Druklo (known more widely by his pen name, Shokjang) [CH: 周洛 ; zhou luo] currently serving a three-year sentence in a Chinese prison. According to the Committee for the Protection of Journalists, Shokjang is one of at least 49 writers and journalists behind bars in the People’s Republic of China because of their work.

Shokjang was detained by authorities in Tongren county (Qinghai Province) on 19 March 2015. After nearly a year with no formal charges, he was sentenced on 17 February 2016 to three years in prison for ‘inciting separatism’; a charge that Shokjang has rejected and will likely appeal in court.

Shokjang is a highly respected writer, intellectual and blogger, known for his reflective and thought-provoking articles on contemporary Tibetan issues. He is known in particular for his critical articles on government policy in Tibet, the increased militarization of the Tibetan Autonomous Region (TAR), and environmental destruction in the region.

On 16 March 2015, three days before his detention, he published a critique of the mass deployment of Chinese security forces to Tibet, and it is believed this article led to his arrest.

Increased oppression in Tibet, including new ‘counter-terror’ measures, is creating a stifling and dangerous environment for Tibetans wishing to peacefully express their views. As a result, a new generation of Tibetans is paying a high price; denied their liberty for peacefully expressing their views in a political climate in which almost any demonstration of Tibetan identity or culture not directly sanctioned by the state, no matter how mild, can be characterized by the authorities as “splittist” and therefore “criminal.”

Freedom of expression is a fundamental human right set out in the United Nations Universal Declaration of Human Rights and further enshrined in Article 35 of the Constitution of the People’s Republic of China, which specifically states that citizens “enjoy freedom of speech, of the press”, and in Article 41, which states that citizens have the right to criticize and make suggestions to any state organ.

As a standing member of the UN Human Rights Council, China has an obligation under international law to respect, to protect and to fulfil human rights, and refrain from interfering with or curtailing the enjoyment of human rights.

Therefore, we, the undersigned, call on you to:

– Drop all charges against Shokjang and ensure his immediate release from prison;

– Guarantee Shokjang’s personal safety and freedom from torture and harassment by officials of the state;

– Release all unjustly jailed journalists and writers in China and Tibet who have been targeted for their critical writing, and for the universal right to free expression to be acknowledged and protected in the region.

The arrest of writers simply for expressing their views casts a dark cloud over press and media freedom in China. We strongly believe that upholding the rights of journalists and permitting the free flow of information is vital to bringing about greater understanding and serves the best interests of all.