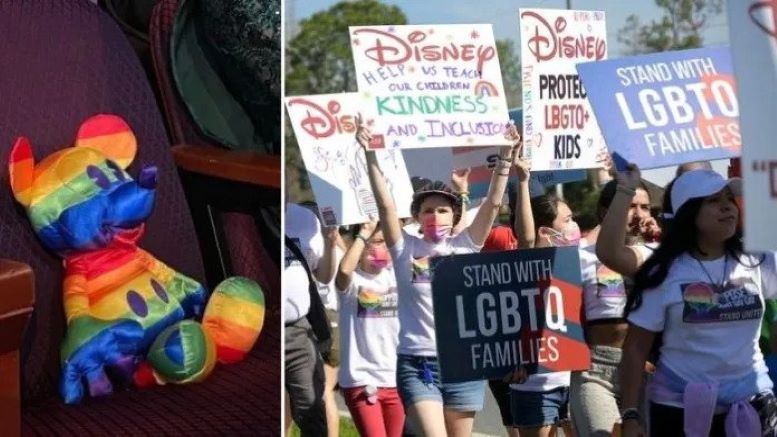 Walt Disney has been accused of pushing ‘gender theory’ and including LGBTQ content in children’s programs which has upset parents. Many have opined that Disney is toeing the leftist gender line and alleged that it was playing politics as the company denounced Florida’s Parental Rights in Education Law brought in by Governor Ron DeSantis.

The law says “Classroom instruction by school personnel or third parties on sexual orientation or gender identity may not occur in kindergarten through grade 3 or in a manner that is not age-appropriate or developmentally appropriate”.

“On March 8, The Florida State Senate passed a bill that restricts sex education on gender for kids during school instructions. The bill prohibits teaching concepts like ‘Sexual orientation’ and ‘gender identity’ to school children with an intent to regulate age-inappropriate content in accordance with the state standards. While Republican lawmakers have argued that discussions over such issues could be done spontaneously, formalising them into school curricula is unjust given its impact on young minds”, OpIndia says explaining the “don’t say gay bill” as it has come to be known.

The article further notes “While the bill passed in Florida does not discriminate against the LGBTQ community necessarily as a policy, it does threaten the objectives of the hard-left, in a sense, it stops way for its ideological indoctrination influencing young minds”.

However, Disney’s ‘commitment’ to exposing children to transgenderism and other sexual orientation issues at an age where they will find it difficult to comprehend goes far deeper than merely opposing Florida law. This became apparent in the company-wide meeting where executives boasted about pushing such content. The internal Disney videos were shared by Christopher Rufo.

The channel’s Animation Executive Producer Latoya Raveneau stated that she was adding ‘queerness’ wherever she could while Disney Parks’ Diversity and Inclusion Manager Vivian Ware boasted that the company has done away with all of its ‘gendered greetings’. In other words, the company has gone fully woke and is open about promoting content that brainwashes children with content that isn’t age-appropriate.

Not to be left behind, the company’s general entertainment content president Karey Burke has vowed to make at least half the characters LGBTQIA and racial minorities in the company’s productions by the end of the year. According to Rufo, several Disney employees were of the opinion that the company’s executives were promoting extreme left-wing activism in every facet of the company.

The company’s employees also opined that those who did not agree with the company’s leftist agenda weren’t allowed the freedom to express their opinions. Conservative employees wrote an open letter opining Disney’s response to Florida law appeared to be actively promoting a political agenda that made them feel out of place in the company.

“For those of us who grew up with Disney as part of our lives, it’s sad to imagine that our kids won’t be watching Disney movies or going to Disney theme parks. But watching Disney execs openly discuss brainwashing kids into gender theory makes cutting off Disney an easy choice”, writes Karol Marcowicz.

On the other hand, some employees of the company also protested against CEO Bob Chapek for not condemning the bill ‘enough’. Even after Chapek assured the protesting employees that he and the company firmly support LGBTQ issues, the latter weren’t convinced as they felt the message came very late and failed to unequivocally condemn the bill’s homophobic nature.

Additionally, the employees also demanded that the firm withdraw donations to politicians who were directly or indirectly involved in the passage of the bill. They have handed over a list of 22 such politicians including names such as Ron DeSantis, Ben Albritton, Dennis Baxley, and others. They also want the company to stop all its construction works as well as investments in Florida.

“Furthermore, TWDC’s supposed inaction should be made up by making monetary contributions to ‘The Trevor Project’ – an LGBTQ support NGO and other human rights advocacy groups in order to ‘regain the trust’ to its LGBTQ employees. The protestors have also demanded a share in Disney’s content catalogue which will represent stories from the community in form of movies, ads and TV Series”, highlighted OpIndia.

Disney ultimately gave in to the demand of its leftist employees and went full ‘woke’ as has been noted above. In its official statement it wanted the law repealed or struck down by law. It then went a step ahead and brought in ‘gender neutrality’ in its programs and Parks. Parents and a section of its employees are upset at the development.

Introducing ‘woke’ madness in schools appears to be the latest narrative push of the global left as was seen in such curriculum being brought in by NCERT as well.