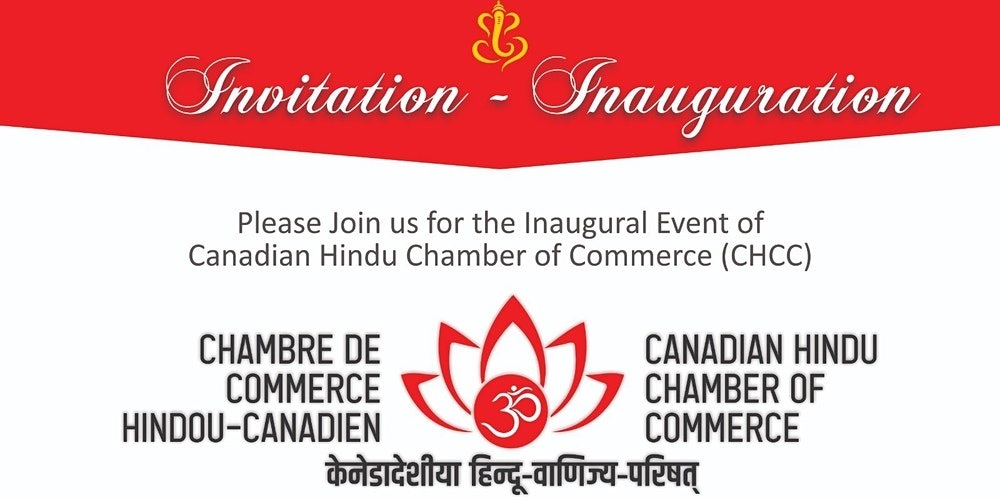 A group of entrepreneurs have joined together to form a new organisation, Canadian Hindu Chamber of Commerce (CHCC), which is aimed at the unification of Canadian Hindus and their economic interests, reports Hindustan Times.

The formation of the CHCC was welcomed by Canada’s Prime Minister Justin Trudeau in a message to the organisers delivered at the inauguration of the Chamber.

In his message, read out by Liberal Party MP Chandra Arya, Trudeau said, “The Hindu community has made important contributions to the Canadian business landscape and I’m sure the Chamber of Commerce will become an indispensable forum for representation, development and improvement.”

The directors of the new Chamber belong to various parts of Canada and have roots in several states of Bharat, as well as Bangladesh, Sri Lanka. It will also represent businesses of community members who have immigrated from the Caribbean, Nepal, Pakistan, SouthEast Asia and elsewhere.

The organisers’ objective behind formation of the Chamber is to provide unified and effective representation to Hindu businesspersons.

Also extending their congratulations via video messages on the creation of CHCC were Leader of the Opposition and Conservative Party leader Erin O’Toole and the Premier of the province of Ontario Doug Ford. Trudeau also congratulated the organisers for the commitment in putting together CHCC despite the last two years being “exceptionally challenging” due to the Covid-19 pandemic.

The Board of Directors of CHCC is led by its president Toronto-based Naresh Chavda.

The idea of an economic forum for Hindus spread across the globe was first mooted by the World Hindu Economic Forum (WHEF – wheforum.org) which held its inaugural annual conference in 2012 at Hong Kong. WHEF brings together financially successful elements within Hindu society such as traders, bankers, technocrats, investors, industrialists, business persons, professionals, along with economists and thinkers, so that they can share their business knowledge, experience, expertise and resources with each other. The end goal is to generate surplus wealth and make society prosperous.

Hindu Economic Forum (HEF – hindueconomy.org), a sister organization of WHEF, has started country and city chapters all over the world to provide a local forum for Hindu entrepreneurs, business persons, professionals, academics etc. to interact and progress together.

WHEF and HEF are driven by timeless Hindu thought expressed by Acharya Chanakya – “Dharmasya Moolam Arthah” (Economy is the Strength) and the wisdom in the Vedas “Sat Hasta Samahara, Sahastra Hasta Sankira” (Create wealth with 100 hands and share it with 1000 hands).

It is good to see that more Hindus across the world are awakening to the need to organize and advance the community’s interests which will ultimately help in creating a more harmonious world by spreading the Dharmic ideas of plurality and mutual respect.