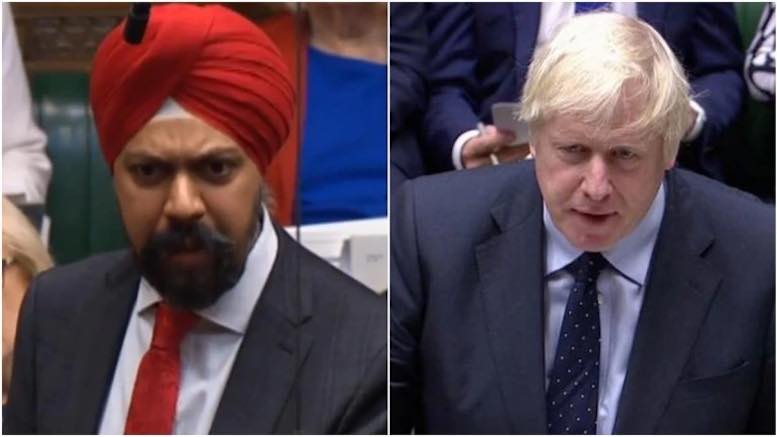 This is the loaded question posed by Dhesi to PM Johnson:

“Many constituents, especially those emanating from Punjab and other parts of India, and I were horrified to see footage of water cannons, teargas and brute force being used against peacefully protesting farmers. However, it was heart-warming to see those very farmers feeding those forces who had been ordered to beat or suppress them. What indomitable spirit, and it takes a special kind of people to do that. So, will the Prime Minister (Johnson) convey to the Indian Prime Minister (Narendra Modi) our heartfelt anxieties, our hopes for a speedy resolution to the current deadlock and does he agree that everyone has a fundamental right to peaceful protest,?”

“Our view is that of course, we have serious concerns about what is happening between India and Pakistan but these are pre-eminently matters for those two governments to settle and I know that he appreciates that point.”

The infiltration of Khalistani, communist and other subversive elements in the farmers protest has become evident, and the protest has become yet another tool for the Opposition to attack the Modi government. The rallies witnessed in UK, USA and Canada under guise of supporting these farmer protests have left not doubt about the ISI-backed Khalistani agenda behind them.

Agricultural experts have welcomed these long due reforms which allow farmers greater choice in selling their produce, while small and marginal farmers in the rest of the country are also optimistic. The protestors have blocked several key border roads around Delhi, and have refused to move to designated protest zones in the capital. They have shown inflexibility while negotiating with the government, and demands have now grown to include release of Naxal violence and anti-CAA riots accused ‘intellectuals’.

Dhesi has in the past claimed that the anti-CAA rioting in Delhi sparked by Tahir Hussain, Umar Khalid and others was an example of “persecution of Indian Muslims which evoked memories of 1984 anti-Sikh riots”. He has also criticised the abrogation of Article 370, claiming that as a Sikh he felt it’s his “duty to stand up for the human rights of all, regardless of colour or creed.” For all his grandstanding, the MP blithely ignored the denial of basic citizenship rights to groups like Dalit sanitation workers & West Pakistan refugees and the misogynistic discrimination against Kashmiri women that Article 370 enabled.

Dhesi was also among a clutch of anti-Bharat Labour MPs who in June attended a seminar organised by Pakistan-backed Kashmiri separatists based in UK. Interestingly, when questioned about the presence of two huge Khalistan banners in the main hall of one of the largest Gurudwaras in Slough, the constituency he represents, and from where he made election speeches, Tan Dhesi chose to evade the question.

Referendum 2020, a call for a separate Khalistan (‘Khalis’ = pure) nation to be carved out of Bharat was launched in the UK. Fringe Sikh groups demanding Khalistan are regularly seen joining hands with pro-Pakisani Kashmiri groups in anti-Bharat protests outside Bharat’s embassies, which are increasingly turning violent.

American lawyer and Republican Party official, Harmeet K Dhillon, also lent her weight to Dhesi’s propaganda politics by tweeting, “Why is India firing on and beating farmers protesting destructive policies that seek to elevate the power of big corporations over India’s small farmers? This is a human rights issue.”

However, the reality is that the worst incident of violence from these current protests occurred when protestors tried to run over cops with a tractor. After blocking Delhi borders for close to two weeks and calling for an unsuccessful ‘Bharat Bandh’ (all-India lockdown) on December 8th, protestors have now threatened to block the vital Delhi-Agra and Delhi-Jaipur highways.