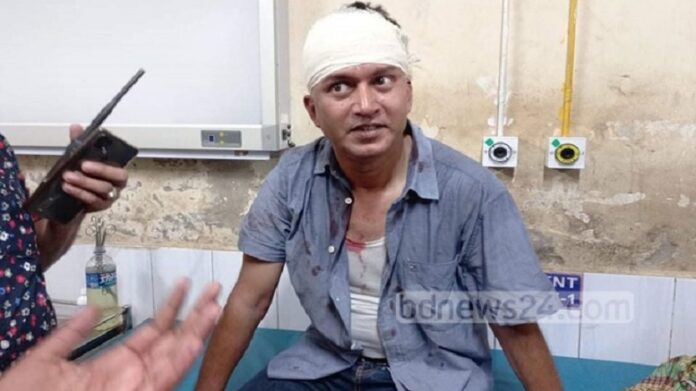 Violence against Hindu temples and the minority community during the Durga Puja festival continued for the fourth day in Bangladesh. Yesterday, the violence was concentrated in Feni district of Chittagong division.

Hindu houses were set on fire, Joykali Mandir, Rajkali mandir and Ramakrishna Temple in Feni were attacked, as per one journalist.

Local media reports said several temples and a number of shops owned by Hindus in Feni were vandalised and looted between 4:30 pm and 11:30 pm yesterday.

Shukdeb Nath Tapan, president of Bangladesh Hindu Buddhist Christian Unity Council’s Feni chapter, said their members who were peacefully demonstrating against the violence of the last few days were attacked. People who gathered outside Trunk Road Bara Masjid beforehand launched the attack with sticks and brickbats. He alleged the authorities delayed in sending Border Guard Bangladesh and Rapid Action Battalion.

The attackers vandalised and torched about 50 shops owned by Hindus and looted the cash and other goods from nearly 10 of the stores, said Parvezul Islam Hazari, general secretary of Feni Traders Association.

A Facbeook user posted, “Hindus in Feni are endangered now. Their houses and shops are burning….Madrasa students are leading the attack now…Stranded Hindus are imploring for their lives. Many of them are cramming in some secured place, but they do not know how long these places would be safe for them.” He added that police and some local political activists have also been injured by the Islamist mobs.

There are reports of attacks on Buddhist temples in the Chittagong Hill Tracts region as well. Hindu establishments in Sylhet (north-east Bangladesh) too were attacked.

“In Noakhali, attackers from a procession of several thousand people stormed into the Bijoya Durga Temple on College Road in Begumganj around 2:30pm. At one stage, the mob beat and stabbed Jatan Kumar Saha, 38, a member of the executive committee of the temple managing committee. He died in Noakhali Sadar Hospital later

Several processions joined by thousands of people attacked and vandalised at least 10 temples and over 50 businesses of the Hindu community on College Road, DB Road, Bank Road, Chowmuhoni, Chowmuhoni Dakkhin Bazar, Radha Madhab Temple and Ram Thakur Ashram in Noakhali, said Gowtam Saha, a Hindu Community leader of Begumganj. His car was set ablaze inside the ashram, he said.

…In Chattogram, a group of zealots from a procession brought out in Andarkilla area started throwing brickbats targeting the Jemson Hall Puja Mandap in the district.

…In Sylhet, religious zealots went to Bhati-Bangla Durga Mandap in Hawladarpara area of the city, vandalised the entrance gate and five houses and three shops owned by Hindu people, locals and witnesses said.

Advocate Dilip Kumar, a resident of the area, said the attackers first tried to attack the Kali Temple and then attacked the Durga Mandap with bamboo sticks. They also attacked several houses of local Hindus and a few shops owned by Hindu people, he added.

The lawyer alleged that police were on the spot during the attack but they did not try to stop the attackers.”

There are reports of clashes between police and Muslim mobs in Hajigang, Chandpur and Dhaka, in which some people were killed in police firing and policemen too have suffered injuries. Police clashed with a Muslim mob in Dhaka At the same time, there are reports of attack on Hindus protesting this violence too in which more Hindus have been injured.

The Bangladesh government claims that the anti-Hindu pogrom which started in Cumilla on Wednesday, the 8th day of Navratri, was brought under control by deploying additional forces. On Thursday, the Indian government too stated that “government of Bangladesh reacted promptly to ensure control of the situation”.

Facts on the ground state otherwise. Both governments need to wake up and work seriously to end this pogrom.