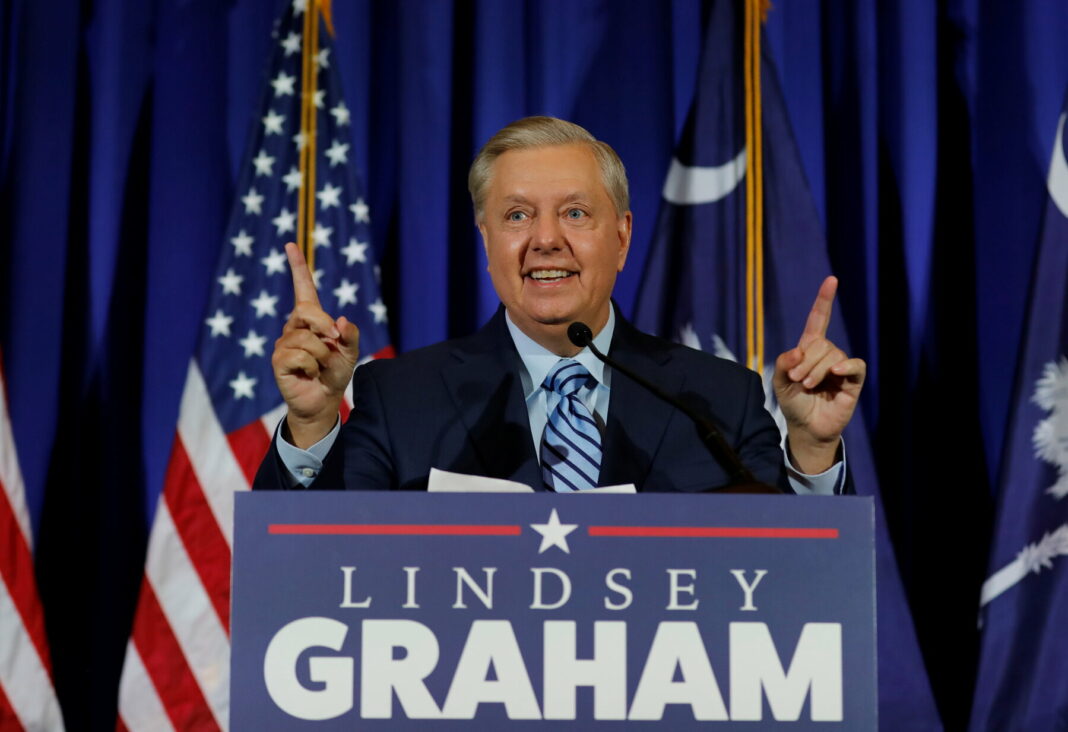 Senior United States Senator and former Presidential candidate Lindsey Graham has called for ‘somebody in Russia’ to assassinate Russian President Vladimir Putin. He made this comment on live TV.

“How does this end? Somebody in Russia has to step up to the plate and take this guy out,” Graham told Fox News TV host Sean Hannity.

He repeated the call later in a series of tweets.

“Is there a Brutus in Russia?” asked the senator, referring to one of Roman ruler Julius Caesar’s assassins. He also wondered if “a more successful Colonel Stauffenberg” existed in the Russian military, alluding to the German officer whose bomb failed to kill Adolf Hitler in 1944. “You would be doing your country – and the world – a great service,” he said.

“The only people who can fix this are the Russian people. Easy to say, hard to do. Unless you want to live in darkness for the rest of your life, be isolated from the rest of the world in abject poverty, and live in darkness you need to step up to the plate,” he wrote.

In another tweet, Graham called for ‘regime change’ in Russia, “It is clear to me the world would be a better place if there was regime change in Russia. Putin is a war criminal who needs to go – at the hands of the Russian people – by any means possible”.

US Senate is the upper house of the American Parliament (Congress).

The Republican Party senator, who has served in US Congress for over twenty years and is a 4-term Senator, had earlier in the day introduced a resolution condemning the Russian president and his military commanders for committing “war crimes” and “crimes against humanity.” Graham is a lawyer by profession and served the US Air Force as an officer in the Judge Advocate General’s Corps (JAG Corps) – he retired as a Colonel in 2015, and his military and political careers ran in parallel.

Lindsey Graham was a candidate for the 2016 US Presidential race, but dropped out before the Republican primaries began. He was an outspoken critic of Donald Trump’s candidacy; in particular, he took issue with Trump’s comments on Graham’s close friend, Senator John McCain, a decorated war veteran. By 2017, Graham had become a supporter of President Trump.

Interestingly, Graham calls himself a ‘Reagan-style Republican’, and has been called a fairly conservative Republican with ‘a twang of moderation’. He has also been known to work on some bipartisan issues with Democrats. The fact that such a senior and mainstream US politician, someone who has years of experience as a private and military lawyer, is openly calling for the assassination of the elected President of another nation, a nuclear-armed one at that, has shocked even some Americans.

The anti-Russia rhetoric has reached dangerous levels in America, with even an ethics professor at the US Air Force War College implying all Russians are ‘evil’ because they put an ‘evil despot’ in power.

Imagine the finger-wagging from the same West if a senior official or military officer from Bharat were to say something like this for Pakistan, even though Pakistani society is indeed deeply radicalized and anti-Hindu, and the Pakistani state poses a real existential threat to Bharat.

“Greed, hubris, power. Same as always,” said an American Navy vet Jack Posobiec to explain the motives behind such naked aggression against a nuclear-armed adversary. As Posobiec also pointed out, Ukraine is seen as unfinished business by certain Obama admin officials (the 2014 Euromaidan protests/coup which ousted Ukraine’s democratically elected President Viktor Yanukovych is believed to have been plotted by the Obama admin and Soros-funded NGOs) who are now serving under Biden.

It is pertinent to note that Russia has launched its military operation in Ukraine after the West repeatedly went back on its promises to not expand NATO further east, and because of the genocidal actions of the current Ukrainian regime against its own Russian-speaking people in the Donbas region. Moreover, after the end of the Cold War, Russia doesn’t pose any direct security threat or geopolitical challenge to the West, and its primary goal is to maintain a sphere of influence in its neighborhood.

What many non-Westerners, including middle class in Bharat, don’t understand is that Republican neo-cons (neo conservatives) like Graham and Democrats like US Secretary of State Anthony Blinken agree on one thing – a view of US as the sole superpower whose model of Western Universalism must be force-fitted on the entire world, and anyone who opposes this qualifies for ‘regime change’. I

Hence we must take Western propaganda and rhetoric about ‘democratic backsliding’ in a Modi-led Bharat very seriously. The same regime change calls could soon be directed against Bharat, and we must be prepared for all eventualities.