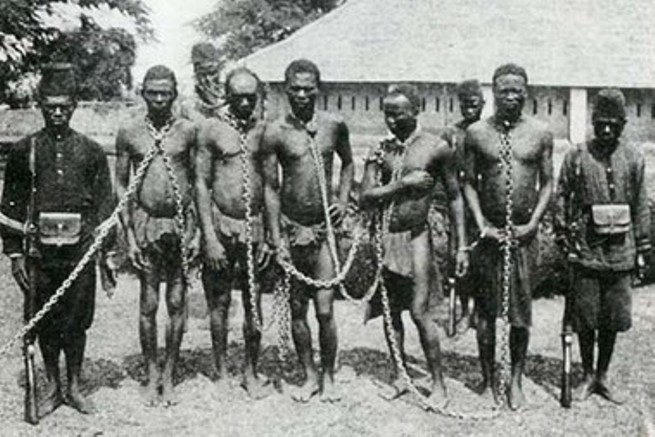 In its July 31 edition, The Economist included a review of the book, ‘In the Forest of No Joy’ by J.P. Daughton.  The book depicts the brutality that was unleashed on Congo during its colonial occupation by Belgium under King Leopold II at the end of the 19th century. As the review itself states, nearly 10 million Congolese, almost half of their population, perished under Leopold’s reign when villagers were forced into labour to collect rubber and ivory which the colonizers exported for profit.

The Belgian state later overthrew Leopold seizing his private properties and after 1908, ‘the Belgian Congo joined other European colonies in Africa where wanton extraction was to be replaced by a supposedly civilising mission, but it was ‘not that different from what happened under Leopold.’

American historian Daughton’s book ‘exposes how forced labour in the French Congo (now the Republic of Congo), on the other side of the river from Leopold’s possession (now the Democratic Republic), led to the deaths of tens of thousands of Africans.’

The book describes the construction of the Congo Ocean Railway that connected the central African interiors to the Atlantic. It speaks of the railway-building exercise not being devoid of violence and yet, surprisingly, The Economist review claims that some of the colonial bureaucrats ‘genuinely seemed to think they were lifting Africans out of poverty.’

Daughton depicts how the colonial administration claimed that it recruited paid volunteers for the railway construction work, but in reality, it was forced labour and the Congolese were ‘forced to work at gunpoint.’ The labourers were treated brutally, often chained at the neck, and forcefully marched for miles to the tracks to carry out the construction.

The colonial state used the unskilled labour of the Congolese for free and found it cheaper to replace the dead labourers with new ones than to keep the labourers in good health! In 1925, a doctor estimated that most labourers did not survive for more than a year. The book thus shows how the colonizers had a clear disregard for the life of the Africans, a race that they, the Whites, considered to be inferior.

Worse, despite their own French officials documenting this abusive state of affairs, nothing was done to change the brutal treatment. In fact, one of the officials had compared the murder of the railway labourers to the genocide of the Herero in Namibia and yet no action followed to rectify this.

Despite the revelations of brutality made in the book, The Economist spoke of the ‘admirable intentions of colonial bureaucrats,’ when tweeting about the review of the book in a clear attempt to whitewash the crimes of the white colonialists.

Naturally, the tweet generated huge outrage among several people and The Economist was forced to take down the tweet. Amongst those outraged were many Africans who took umbrage to the wordings in the tweet, and rightly so.

One handle, Ifalade Olorontuba from Nigeria said that chopping off hands of the Congolese and killing between 5 to 8 million of them cannot be considered as having ‘admirable intentions’:

"Admirable intentions of colonial bureaucrats,who did genuinely think they were lifting Africans out of poverty…" by chopping off their hands,and killing between five to eight million Congolese.
This is the height of madness and @TheEconomist has not seen anyone to tell it. https://t.co/t2anHUQ85R

Similarly, a handle called Afrikan Mama said that colonial bureaucrats did not have a single admirable intention:

Colonial bureaucrats didn't possess a single admirable intention towards any aspect of Africa. They came here to pillage, kidnap, murder, and loot. https://t.co/xlES9GT5vk

A handle representing a 2020 book  on the subject of brutality connected with building infrastructure, with the title ‘Infrastructural Brutalism’ also tweeted against The Economist’s ‘typical apology for colonial violence’:

The Economist employs its typical apology for colonial violence by framing the "admirable intentions" of the colonizers. There is nothing "admirable" about #colonialism. The book is called In the Forest of No Joy: The Congo-Océan Railroad and the Tragedy of French Colonialism. pic.twitter.com/pGhffPsZHk

The Economist’s content has always tended towards being condescending and patronizing towards non-white countries which it considers ‘third world’. There is also a tendency to try and play king maker for these poorer nations. One cannot forget how before 2014, it was campaigning against Narendra Modi and batting for a weak dynast like Rahul Gandhi!