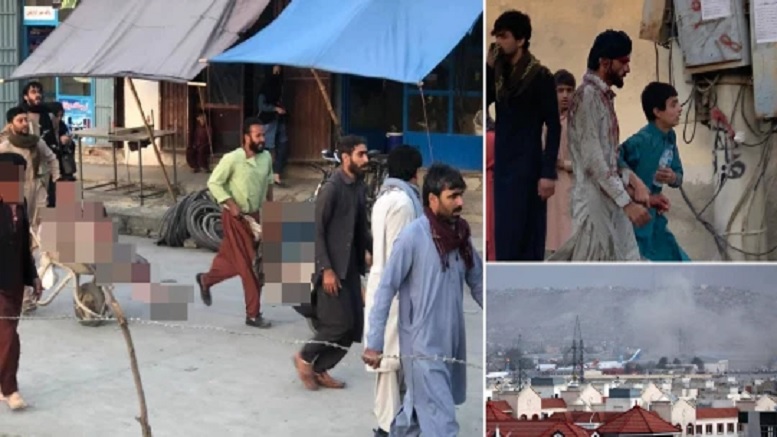 US President Joe Biden has said that he will avenge the twin bombings at the Kabul airport that have killed at least 103 people, including 13 American service members, adding the ongoing evacuation in Afghanistan will continue uninterrupted.

The number of US service members killed in the attacks has risen to 13, with 18 more injured troops currently in the process of being flown out of the country, according to the latest update by Bill Urban, public affairs officer of the US Central Command. The blast at the airport was followed by another one at the adjacent Baron Hotel, whose details are being figured out by the US military. The Wall Street Journal, citing a senior Afghan health official, reported that the explosions left at least 90 Afghan civilians dead.

The Afghan Ministry of Public Health previously confirmed the attacks had resulted in over 60 deaths and 140 injuries among Afghans, and were claimed by ISIS-K, a radical affiliate of the Islamic State.

Biden said he had ordered US military commanders to “strike ISIS-K assets, leadership and facilities”, stopping short of elaborating on the specifics. “These IS terrorists will not win. We will rescue the Americans. We will get our Afghan allies out. And our mission will go on,” he added.

Asked about whether he considered it a mistake to depend on the Taliban to secure the perimeter of the Kabul airport given the mass casualty bombings, Biden said it’s not a matter of trust but rather the Taliban’s “self-interest” that led to US coordination with the Taliban.

The President said he has thus far been shown no evidence of collusion between the Taliban and IS in masterminding both what happened in the morning and what was expected in the future. The attacks came as the US has been scrambling to evacuate Americans and its Afghan partners from the war-torn country since the Taliban entered Kabul on August 15. After seizing Kabul, the Taliban said all US troops must leave Afghanistan no later than August 31, and Biden has upheld that deadline.

US officials handed the Taliban names of Americans, green card holders and Afghan allies to evacuate, according to a bombshell report by Politico.

Anger and shock are rippling through Washington on the scale of outsourcing Americans’ exit routes to the Taliban — which has a long history of brutality towards US service members. “Basically, they just put all those Afghans on a kill list,” Politico quotes a US defence official as saying. “It’s just appalling and shocking and makes you feel unclean,” the official is quoted as saying.

When asked about this reported list, US President Joe Biden acknowledged – in general terms – that there’s plenty of communication between the Taliban and US forces. “There have been occasions when our military has contacted their military counterparts in the Taliban and said this, for example, this bus is coming through with X number of people on it, made up of the following group of people. We want you to let that bus or that group through,” he said.

Gen. Frank McKenzie, commander of US Central Command has spoken in similar ways about the Taliban in recent days, ever since the US kicked off its chaotic and rushed withdrawal. On Thursday, in the first Pentagon briefing after the Kabul bombings, Gen. McKenzie outlined detailed security coordination with the Taliban as a tool to get Americans to safety.

A US Defence Department official has said the Trump administration wanted to pull out of Afghanistan in the hopes of joining forces with the Taliban against ISIS-K.