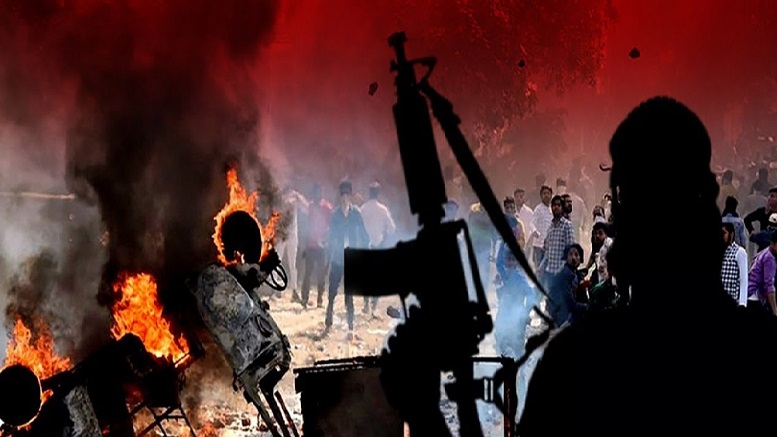 What comes to your mind when you think of South Bharat? Ancient temples, educated talented people, clean cities, people who are conscious of their language and culture, magnificent sea beaches, etc. However, over the last few years, this image has been dented drastically.

Recall how the Bhatkal brothers, who were from Karnataka, created the evil terrorist organization Indian Mujahideen, which carried out several terror attacks all over Bharat killing hundreds of innocent people. Do you remember how many students from Kerala join ISIS every year, how a student from Andhra Pradesh appeared in an ISIS video some time ago? How Islamic ideology is being promoted in Kerala and Tamil Nadu, and hundreds of mosques and madrasas are being erected funded by Arab countries? How PFI and SDPI are increasing their dominance in Kerala, and are also carrying out terror attacks in neighboring states?

Look at the recent Hijab controversy in Karnataka, how suddenly this issue was raised and it was said to be against Islam. Many Islamic organizations in South Bharat have come forward on this issue, and they have raised this issue at the international level as well. If you observe all these incidents collectively, you may find some shocking trends, you will see how Islamic radicalization has been carried out in the southern states in recent decades.

If we do an in-depth analysis, we find that radicalization takes place in southern Bharat, mostly due to its current and historical ties with the Middle East. These strong ties are based on the ethos of Islam (read Sunni Islam), as it is preached, observed, and practiced by Bharat’s Muslims who are either working in Gulf or influenced by heavy funding from Arabian countries.

We have seen a barrage of Islamic influencers or preachers, such as Zakir Naik, who is not only brainwashing the Muslim youth but also sowing the feeling of hatred in the minds of innocent youth. These radical Islamist preachers identify the well-educated youth mostly from well-to-do families and then teach them the radical narrative of migrating from Dar-Ul-Harb (house of war) to Dar-ul-Islam (house of peace).

They are told that their Quam has been oppressed a lot, and the only way to get rid of all this is to do jihad. They are forced to follow the teachings of Islam, it is fed to them that they have to do jihad, kill the infidels, and then only they will get Jannat. They are explained that their real-life begins only after their death, and this idea provokes children to commit violence in the name of religion.

The radicalization issue has deep psychological roots. The Muslim youngsters are searching for an identity and these radical Islamist preachers push them into spiritual anchorage by aiming for over-religiosity. They capitalize on the vulnerable mental state of these youngsters and use them as a perfect breeding ground for extremist Islamic indoctrination.

How Political parties are fanning Islamic Radicalization in the South

The biggest saviors of radical elements are none other than our ‘secular’ politicians. They always give cover fire to these elements and dissociate them from Islam. Our politicians exercise perfect denial and preach that radicalization in southern Bharat has nothing to do with Islam.

You will hardly get any mainstream political party, which speaks about the threat of radicalization and its consequences. The inter-sectarian and inter-organizational differences in religious narratives and the well-concocted appeasement policies of political parties make it extremely detrimental to preserve the communal harmony in the southern states.

It is unfortunate to see how our political parties are underplaying the radicalization, which only helps the Islamist elements to create confusion, and hinders the public’s understanding of the gravity of the threat posed by Islamic radicalization.

Why no major terror attack in South Bharat despite having so much radicalization?

Well, this is the most common question that one may ask. Despite having so much radicalization and sleeper cells of Al Qaeda, IM, and ISIS, we hardly witnessed any major terror attack in south Bharat. Although we pray that no terror attack should happen anywhere in the country, you may be shocked to know about the truth behind this strategy.

No major terror attack occurred in south Bharat because the radical Islamist elements want to protect it as a safe haven. They want to ensure their sleeper cells remain active and use the peace and immunity in the state to accomplish their strategic planning, organizational work, and seeking adequate shelter for their resources.

What should be done to counter this grave concern?

Radicalization has become a major national security threat and demands immediate action from the government and our security apparatus. If delayed or avoided, it will become a massive hazard for Bharat in the near future.

Effective and firm action against the radical Islamist ecosystem is very much needed. The organizations such as PFI, SDPI must be banned and any provocation must be neutralized by taking strong legal, financial, or military measures, wherever it is required. We hope our government will understand the gravity of the situation and take appropriate actions to safeguard our people.