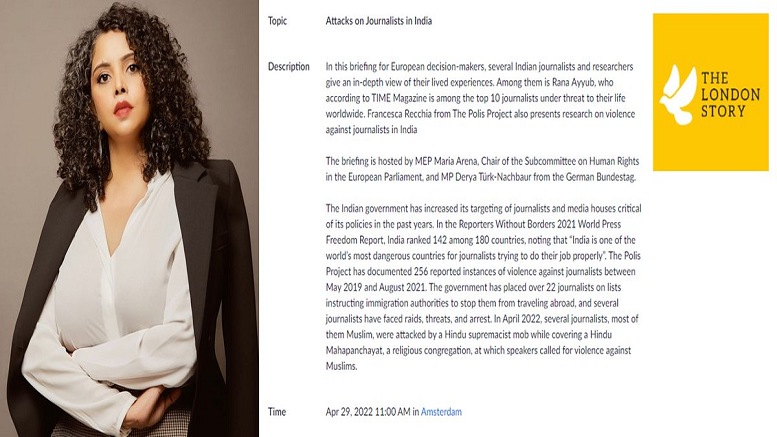 She may not know that the FTLS is yet another front of the same Jamaat-ISI nexus, that is running multiple fronts – all targeting Bharat.

It is to be noted that Organisations in Netherlands need not disclose their financial transactions unlike in UK.

These fronts are associated with Justice for All (JFA)- the Jamaat/ISI nexus in the West.

Manuve is a regular at Jamaat fronts – Save India & IAMC – both founded by Shaik Ubaid and both have eminent ‘experts’ – CJ Werleman & Pieter Friedrich as resource persons.

Sunita Vishwanath, co-founder of Hindus for Human Rights (#HfHR) is co-host of multiple events with IAMC – all ‘concerned’ about Bharat.

Her other organization Women for Afghan Women is funded by Soros’ Open Society Foundation.

Interestingly, while Polis Project’s entire work is on Bharat, the Facebook page is run by a Pakistan-based admin!

In nutshell, FTLS is connected with IAMC/ JFA – which is connected to Islamic Circle of North America (ICNA) a Jamaat-e-Islami, Pakistan front in the West. JFA was founded by Malik Mujahid, former President of Jamaat-e-Talba, Pakistan (youth wing of Jamaat).

The MEP: Maria Arena, the Member of European Parliament (MEP) who is conducting the so-called EU Parliament briefing with FTLS, is associated with the ISI pawn Pervaiz Iqbal Losar via EU-Pak Friendship Federation, to target Bharat.

A coordinated campaign to stick genocide stamp on India was pushed by- IAMC, HFHR, FTLS by cosponsoring a 3-day event #IndiaGenocideSummit2022 (#IndiaOnTheBrink) on “impending genocide on Indian minorities”

But the question is, Why?

A coordinated campaign to stick genocide stamp on India was pushed by- IAMC, HFHR, FTLS by cosponsoring a 3-day event #IndiaGenocideSummit2022 (#IndiaOnTheBrink) on “impending genocide on Indian minorities”

But the question is, Why?

The label of genocide is being plastered on Bharat as a pretext to launch a boycott, divestment and sanction campaign against Bharat.

If you do not see the pattern, you are not paying attention.

(This article has been compiled from the tweet thread of @disinfolab)