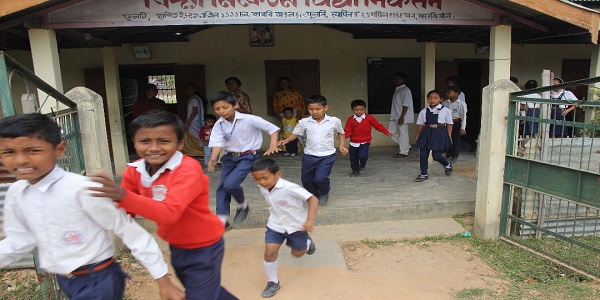 In a technology driven world, it’s a rare treat to see a form of storytelling that goes back 5000 years ago and still retains its charm and appeal. ‘Malvikaagnimitram’ a musical comedy by Dhaatu Puppet Theater is one such show that not only captivates the viewer with its brilliant production and old world vibe but is also reviving the dying art of puppetry. Dhaatu is currently performing in 21 cities in the US to raise funds for Vishwa Hindu Parishad of America’s (VHPA) initiative “Support a Child” (SAC).

Internationally famed Bengaluru based puppeteer Anupama Hoskere and her crew of artists have already performed in eight cities and have drawn huge crowds at every venue. Hoskere, a trained classical dancer brings Mahakavi Kalidasa’s story of King Agnimitra and Malvika to life through the medium of puppets.

The skillful manipulation of strings, the unique combination of beautifully decorated puppets with a live Bharatnatyam dancer who is par excellence, vibrant costumes and an English narration with its touches of dry humor makes the 70 minute presentation a must-see, particularly for the next generation.

Hoskere, who has a Masters in Engineering, carves the puppets herself and has designed 575 puppets to date. Incidentally, she received the news that she has been conferred with the State Sangeet Natak Academy Award while on her 21- city tour of the US.

The performances are part of a fundraiser effort for SAC, a Seva program of VHPA. Established in 1985 to eradicate illiteracy, SAC believes that only education can transform the life of a child and a country, break generational poverty and open the doors of opportunity when socio-economic reasons often rob them of that choice. The visit to one of SAC’s hostels before coming to the US was an eye opener for Hoskere. She was not only impressed at the way the children were being educated and trained in vocational skills but was struck by how “clean the place was.” Raising funds for SAC, she realized, was an opportunity for her to “do seva.”

The driving force behind the project is Vice President – Seva, VHPA Renu Gupta. The project supports 2500 children who are housed in 30 plus hostels in 15 States. The children come from socially and economically backward areas affected by Naxalites or other separatist groups or are orphans, runaways or children of sex workers. Renu Gupta and her husband Arun Gupta, who is equally involved, make it a point to visit one hostel each time they visit Bharat.

The hostels not only educate the children till the 12th grade in Central Board Certified Schools but also teach yoga, music, arts, sports, and values that build character. Children are encouraged to go to college and have become engineers, doctors and professionals. Kalpana Raout, the Commonwealth Olympic medalist is a SAC product. Likewise Sejal Nayar won a gold medal in the Special Olympics. What’s heartening is that many children move back to their villages to uplift their communities.

Apart from providing a safe haven and an education, SAC also provides skills such as tailoring, computers, mechanics, auto repair and commercial driving.

SAC’s annual fundraisers such as this one help the organization support 2500 children but this year the goal has jumped to 2900 children. A donation of just $250 dollars a year can give a child a new life. Donors who sponsor a child receive a child’s picture, a short biography, an academic report card and are encouraged to keep in touch with the child and visit the hostel. Administration costs are a bare 9%.

For more information about dates and venues, please visit www.sacusa.org