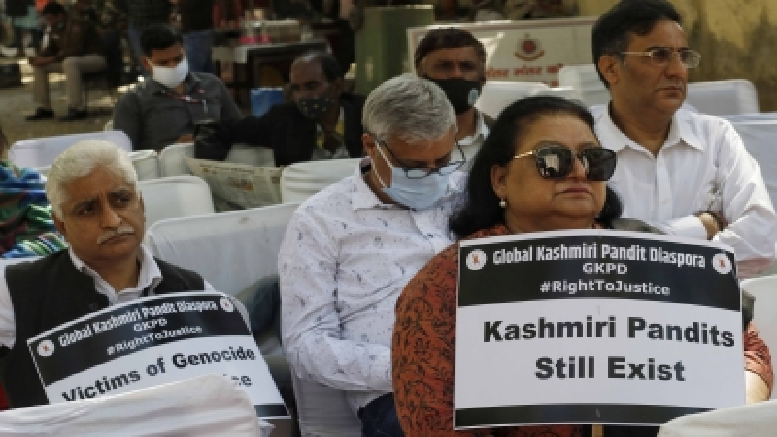 And one more Kashmiri Pandit youth out of the serving PM’s employment package (hostage) programme falls victim to terrorism in Kashmir. Thus genocide and ethnic cleansing remain unabated. Martyr Rahul Bhat joins his dozens of colleagues in heaven leaving behind his family in utter distress. The whole Kashmiri Hindu community is in shock and anger and rightly so.

The unfortunate happening was written on the walls when a number of terror outfits publicly warned the Kashmiri Pandits in the valley through social media, letters and posters declaring that they will be killing the Kashmiri Pandits anytime. The LG administration failed to take congnizance of the development and was driven more by a negative mind-set against the Pandit community than by the consciousness of its duties and responsibilities.

The biggest and the most difficult question regarding Kashmir imbroglio is the return and resettlement of the Kashmiri Pandits, the indigenous people of Kashmir. It needs no repetition that this hapless community of Kashmir, which was hounded out by the fundamentalist-terrorist enclave in Kashmir in 1989-90, continues to live in exile for the last thirty three years now. Governments after governments expressed their “intent” to bring the Pandits back without any tangible plan and dialogue on the issue with the Pandits. Rhetoric on the issue by the politicians of various hues has been more in sight than any sincere road ahead ever since the ethnic cleansing of Pandits. Every government, politician and administrator keep on repeating that ‘Kashmir is incomplete without Kashmiri Pandits’.

When the Supreme Court of India wanted to know, in a particular case on Kashmiri Pandits, fifteen years ago, about the then government’s resolve and plan to resettle the displaced Pandits back in Kashmir, the government submitted before it the PM’s Employment package for the youth of the displaced people. Then in 2008, the UPA II government led by the Congress announced the package for recruitment of 3,000 displaced youth in various government departments in Kashmir valley in the supernumerary capacity at the expense of the security related fund.

The government and the administration knew that since the youth of the community was in total distress, thus the government would be successful in hoodwinking them to accept the “proposal” though with dire conditionality for them. The same thing happened.

The then community’s awakened representatives opposed the package in the name of the so-called token rehabilitation in Kashmir valley with anti human rights clauses attached to it. The community didn’t agree with the idea of rehabilitation under the garb and guise of the PM Recruitment package for the displaced youth. However, the community was lured rather forced to accept the package as the only method to get the desired employment for its educated unemployed youth. The community treated the employment package as a classic example of bonded labour and making its youth a near ‘hostage-group’ in the valley situations.

For the first time after a gap of 12 years of the implementation of the PM’s employment package, the head of the UT of Jammu and Kashmir made a loaded statement on the issue. The LG Manoj Sinha clarified the situation in this regard in April last year which coincided with the considered view of the KP displaced community in this context. He said that the resettlement issue and the PM Employment package are two different issues. The consistent and considered view of the displaced community is that while the issue of employment is an issue of economic subsistence, the resettlement is a political issue that needs its final solution, politically. Thus it needs to be clarified that the issue of resettlement of the Kashmiri Pandits in Kashmir need not be confused with the PM’s Employment package.

In view of some serious current developments those have been taking place in the Kashmir valley for the last several months in particular, the PM Package employees have been caught in a very unpalatable situation due to the selective killings in the valley. They are given a feeling of being political waif and forsaken by certain sections in the administration and the society in Kashmir. Though both have a bounden duty to protect them and provide to them a sense of security in the valley in addition to the normal security and safety, they are being coerced to toe the dictum of their officers at the cost of their life in the valley.

Infact, these hapless people needed to be treated beyond like a ‘trapped community’ in their own homeland and their human rights regarding their rights like freedom of expression, liberty and life are as sacrosanct as they are for all others living in the UT of Jammu and Kashmir.

The hard fact of the matter is that the PM’s Employment package (hostage) programme  has completely failed as the so-called Rehabilitation plan for the Kashmiri Pandits in the valley. It has multiplied the woes of the community and has happened repeatedly for the last twelve years. The recruited youth were put under terrible living conditions time and again due to the selective killings besides facing a hostile administrative environs in their offices where they stand appointed. As a consequence of continued selective killings in the valley, the minority community employees were scared and advised by their own colleagues, comrades, landlords and sympathizers in the past to leave for Jammu for some time till normalcy would return.

On the one hand, these hapless employees are fighting for their survival in the valley and on the other hand, a section of the administration, with the help of its pen, seems hell bent upon to deprive them of their due. Application of SO 194, non-promotions to them while the same are provided to non-PM package employees are a couple of examples to cite here.

The employees have been forced to take the route of courts to get justice, which exposes the intent of the administration in this regard. They are forced to take half of their salaries and live a life of distress even while they stand employed under the package. All of them have been reduced to second grade citizens practically. There is a tremendous bias working against the community and the employees are paying it by their nose day in and day out. Contrary to the statement of LG, the J&K Administration is highly insensitive to the cause of the Kashmiri Pandit employees posted in the valley.

Any future plan for the resettlement of the Kashmiri Pandits in the valley, lacks the main ingredient in it. It is the discussion, dialogue, aspirations and approval of the people for whom the government contemplates to go ahead with the proposal in future. In case the displaced community is not taken into confidence on such a vital issue linked to the future of the community, the proposal is bound to meet the fate of the PM’s Employment package, which is a clear and complete failure in context of resettlement of the community. Moreover, providing jobs to the victims of the ethnic cleansing for their ‘rehabilitation’ in Kashmir is against the Principle of Refoulment also.

It is high time that the government opens new vistas for an important and urgent dialogue with the displaced community in regard to these trapped employees. Any kind of hyperbole or overconfidence on the part of the government and administration in this regard will be frought with dangerous consequences. Therefore, it is expected that the government listens to more wiser voices than going ahead solo and risk its stand on Kashmir and Kashmiri Pandits. The J&K-DGP, Dilbag Singh in context of the security of Pandits in the valley amply clarified that every individual can’t be provided the guard by the security apparatus.

The PM employment package employees are definitely a terribly trapped group of minorities in the valley. No government is capable enough to provide them security everywhere and everytime. The best possible solution is to post them all in the Jammu region as soon as possible. The government needs to say good bye to the Congress & NC plan of “offering Kashmiri Pandits as sacrificial lambs” in the valley before the butchers of genocide and ethnic cleansing.

If farm law Bills could be reversed after two years, the package employees could also be posted in the Jammu region outside the Kashmir valley where they are facing genocide and ethnic cleansing. The government needs to gather guts to accept the failures and take corrective measures forthright. There is no alternative left now, sooner the better….!