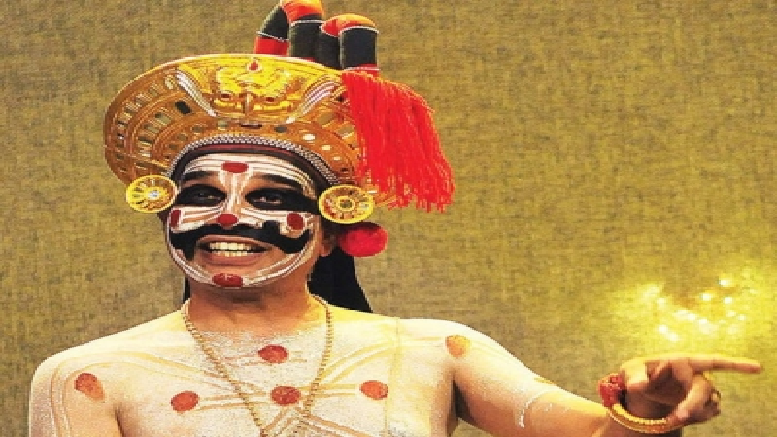 The Sanskruti Centre for cultural excellence based out of London conducted a webinar highlighting the ancient Kerala art form of Koodiyattam which is officially recognised by the UNESCO as a Masterpiece of the Oral and Intangible Heritage of Humanity.

Eminent Koodiyattam artist and teacher, Painkulam Narayana Chakyar spoke about the origin and history of Koodiyattam. He said that Koodiyattam is considered to be the oldest living theatre tradition globally and this is the first art form recognized by UNESCO for its exceptional value.

He explained at length on Koodiyattam as the only surviving Sanskrit theater in Bharat and its journey through the past 2,000 years.

The four types of Abhinaya in classical dance were explained with the help of powerpoint slides and videos and the audience were enthralled to see the live demonstration of the “Navarasas”, the nine different emotions and expressions and some of the specific hand gestures used in the art form.

Mukundan Menon, retired General Manager of State Bank of India and deep fan of Koodiyattam while speaking to IANS said, “The web performance was exceedingly well and the artists explained the nuances of the oldest theatre form with ease using slides and videos. A great experience.”

The programme commenced with the a welcome speech by dancer and founder of Sanskruti Centre, London, Ragasudha Vinjamuri followed by introductory lines about the work of one of the greatest exponents of Koodiyattam, Late Padmasri Mani Madhava Chakyar by artist Manju Sunil and the English version was done by Salini.

Ragasudha told IANS: “Sanskruti Centre is established to promote the traditional art and musical forms in India and we are glad that we could conduct a programme on Koodiyattam, the oldest theatre form of the globe.”

Several Europeans and Bharatiyas joined the virtual Koodiyattam performance from across the globe.

Dancers from across Bharat to take part in 41st Natyanjali festival at Chidambaram, TN