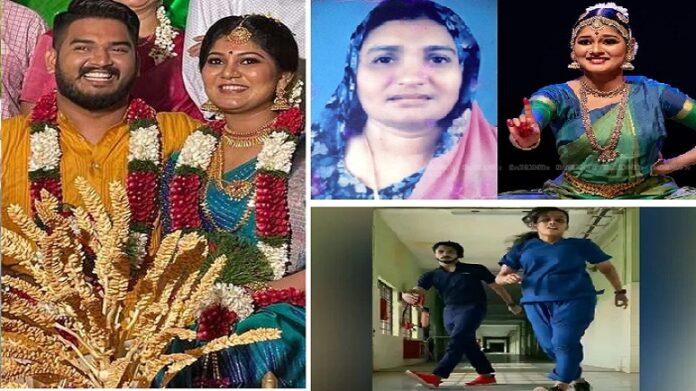 Classical dancer Mansiya VP, a Muslim girl from Malappuram in Kerala who was shunned and reviled by her community for learning classical temple dance, has now married a young Hindu musician named Shyam Kalyan, with the blessings of both families. Mansiya had earlier abandoned her birth religion, and runs a dance school called ‘Agneya’ at her native place, Valluvambram.

Her story came to prominence after her cancer-ridden mother was denied a burial in the local mosque when clerics accused her of practicing classical dance that they deemed was non-compliance with Islam. That was many years ago.

Mansiya and her family started to face vulgar attacks from religious fundamentalists ever since the turn of the century. She was just 3 when she started learning Bharatanatyam. The ‘Mahal Committee’ attached to the local mosque made virtual outcastes of her family, in Kerala, in the 21st century.

Her issues were brought to public view back in 2007 by a Hindu organization called Haindava Keralam. Sitting in their run-down home at Vallumvambram in Malappuram district, her father Alavikutty spoke about their problems.

Valluvambram village is as predominant a Muslim area as one might expect from countries like Pakistan or Bangladesh, and is right in the middle of Malappuram. Hindus just do not exist, and even if they do they are suppressed and oppressed. The fate of free-thinking Muslims is even worse as is evident from Alavikutty’s case.

It is an area that spawned an Arabi-Malayalam script, a version of the Malayalam language written in Arabic script. It is still taught to all young Muslims and has spread as far as Malaysia and Singapore. Libraries in Valluvambram are attached to mosques and as expected, most provide nothing more than a rich source of Islamic studies.

Men gather in mosques for the evening prayer and continue to loiter after the prayers discussing social and cultural ‘issues.’ Business and family cases are sorted out during such sessions. This quasi-Taliban model of justice where women are missing is called a Mahal Committee.

This powerful group is controlled by their NRI paymasters who remain unseen and are mostly based out of the gulf countries. Valluvambram local Mahal committee argued that it is ‘un-Islamic’ for a girl born into Islam to learn Hindu classical dances. Islam prohibits girls who reach puberty from making public appearances on stage and such feats create big issues, was their opinion.

Speaking about the Mahal, Alavikutty said that they have so much poison in their minds that he feels sad. He added that if they were rich and had their daughters won prizes in Oppana or Mappila Pattu, no one would have raised a finger. Oppana is a local Muslim dance that some fundamental Muslims allow their girls to enjoy on the sly till they are married off, the sooner the better.

Her mother Amina saw a dance program on TV while Mansiya and her sister were very young, liked it and wished that her children too try a hand at it. Alavikutty was abroad and since he had a theatre background, supported Amina. Mansiya and her elder sister Rubiya started training under Sarojini teacher in Manjeri and later took dance lessons from her teacher Puthur Pramodh Das.

When Amina fell ill with cancer, Mansiya was still a school kid. Someone told the family that a letter from the Mahal committee to certain Islamist ‘philanthropists’ abroad will help them financially. The hate for the family was such that the Mahal members told them that Alavikutty leads a ‘wayward’ life (theatre background) and denied aid since he sends his daughters to dance to the songs of Hindu Gods.

They imposed the condition that if they wanted help, the girls should stop dancing and should contradict their earlier statements. Amina’s answer was a firm no. A well-known dancer named Parameswaran Namboodiri reminded the family that when they have talent as good as this, why to beg for donations.

The final blow came when Amina died and the mosque denied the family 6 feet land to bury her and she had to be taken to her native place near Kondotty for a decent burial.

Within a few years, Mansiya became a consistent A grade winner in Bharatanatyam, Kuchipudi, Mohiniyattom and Keralanatanam in the Kerala State School Youth Festival. She came first in the school fest for 5 consecutive years (from her 8th standard to her 12th) and was the best performer overall (Kalathilakam) for 3 years. She was a class topper and a National Cadet Corps cadet who scored 30 bonus marks which enhanced her exam scores and improved her chances of joining a professional course after secondary school.

The Kerala School Youth Festival is an annual event conducted by the Kerala government since 1956 and is the biggest event of its kind in Asia. It is aimed at preserving Kerala’s own cultural art forms. Several art forms are highlighted and children from over 1000 institutions all over the state participate. Islamists shun the event, except if it’s for Oppana.

During all the three years of her graduation at the Manjeri NSS College, Mansiya was the Kalathilakam of Calicut University. She ranked first in MA Bharatanatyam from Madras University and completed her MPhil Ph.D. in dance from the prestigious Kerala Kalamandalam. By then she had picked up practicing Kathakali, became a solo drama artiste and performed on women empowerment. Her elder sister Rubiya is a Bharatanatyam lecturer at Lucknow University.

Both she and her sister have faced severe criticism from Islamists for not wearing a burkha and for performing Hindu dance forms. Their teachers at school and the madrassa never praised them for their achievements but neglected and discriminated against them. They had no Muslim friends because they were convinced that Mansiya and Rubiya were doing something wrong.

Real religious trouble began when Rubiya performed at the world-famous Hindu shrine of Shri Krishna in Guruvayoor. The sisters started to get abused when they even walked down the road. Some tried to attack them while others openly admitted that they are about to be killed. Even their own relatives told them that hell awaits those who dance on stage.

Mansiya fondly remembered the time when she was invited to perform at the famous Mylapore temple in Chennai, an area dominated by Hindus, particularly Brahmins. There was no objection against a Muslim dancing to bhajans praising Hindu Gods. In fact, after the program, many met her to congratulate her. Several temple committees invite her now and her Hindu friends from school are proud of her work.

Mansiya thanked the same Islamists who opposed and oppressed her. She said that she is grateful to the people who tried to pull them down, as it has only helped her to increase her dedication and follow her dreams.

It was recently that another artist from Kerala named Sabeena Latheef too had returned to her roots in a similar fashion as Mansiya.

Islamist radicals are now baying for Mansiya’s blood but ironically they are the same ones who were seen encouraging the dance involving Razaq and the Hindu lady Janaki Omkumar. That dance and the accompanying music were far more vulgar than the artform that Mansiya practices. So-called secular media who asked “Dance Jihad! – What’s that?” conveniently skipped the Mansiya story and marriage.