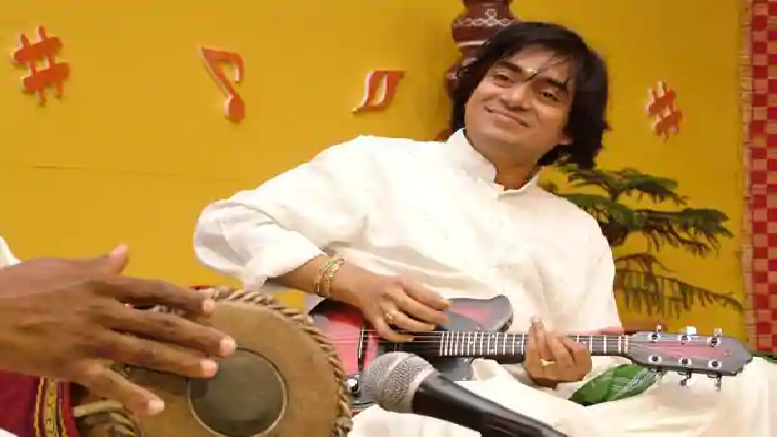 Uppalapu Srinivas was born on 28 February 1969, in Palakollu, West Godavari District, in Andhra Pradesh. At the age of five, he got fascinated by the western instrument Mandolin after he heard it being played at a concert he attended with his father Sri. Satyanarayana. Upon realizing the talent of his son, his father, who had studied classical music and himself a clarinetist started teaching him.

Since the Guru Rudraraju Subbaraju did not know how to play the mandolin, he would just sing the Carnatic music, and the six year old U. Srinivas, would play them on the mandolin. Thus, Srinivas transformed himself from an uncut diamond to polished diamond and developed his own style of playing, and amazingly, on an instrument that was alien to Carnatic style hitherto. Soon, Srinivas’s family moved to Chennai, the hub of Carnatic music, where most eminent Carnatic musicians live.

He made his debut Carnatic concert performance in 1978 during the Thyagaraja Aradhana festival at Gudivada in Andhra Pradesh. Thereafter, at age eleven, in 1981, he gave his first public concert in Chennai at the Indian Fine Arts Society during the December Music Season. The skeptics were convinced, critics were silenced and music lovers were mesmerized.

At age eleven, a star was born, who was both admired and adored. Initially Srinivas started playing the acoustic mandolin, but he later switched to the electric mandolin. He was the first musician to use the electric mandolin in Carnatic music: he modified the electric western instrument, using five single strings instead of the traditional four doubled strings to suit the Carnatic style of music especially gamakas, or nuanced oscillations.

Starting in 1982, he performed regularly for three decades during the December season at the prestigious Madras Music Academy, every year -December 23 date was a reserved slot for U. Srinivas, which is indeed a very rare honour.

Srinivas stormed the world music scene at age thirteen at the Berlin Jazz Festival. Initially scheduled to play a half-hour concert, Srinivas so enthralled the audience in Berlin that he won a standing ovation, and had to play for another hour. “He’s got it in him. He’s fantastic,” raved the legendary Don Cherry, American jazz trumpeter and pioneer in world fusion music.

When John McLaughlin (famous English guitarist and pioneer of Jazz music) revived his group Shakti, and renamed it Remember Shakti, in 1997, he roped in Srinivas into the group along with other celebrated Bharatiya musicians Zakir Hussain, Shankar Mahadevan, and V. Selvaganesh and toured the world. No wonder, Srinivas, became the star attraction of the group.

Soon Srinivas started touring Australia, Southeast Asia, Southwest Asia, extensively and quite frequently across the United States and Canada. Mandolin became synonymous with Srinivas and people started calling him Mandolin Srinivas. He went on to become the second Bharatiya musician to have toured extensively across the globe after sitar maestro Pandit Ravi Shankar.

His younger brother, U. Rajesh, who is also an accomplished mandolin player started accompanying him at concerts over the years. Rajesh also plays jazz and western music, and played the mandolin in the John Mclaughlin album ‘Floating Point’ which received a Grammy nomination in the Best Contemporary Jazz Album Category in 2008. The brothers Srinivas and Rajesh have together composed music and worked on the fusion of Carnatic and western music.

Over the years, Srinivas recorded over 137 albums, in diverse genres from Carnatic music solos to jugalbandis with Hindustani musicians, and world music. He performed with Western artists such as John McLaughlin, Michael Brook, Trey Gunn, Nigel Kennedy, Nana Vasconcelos, and Michael Nyman, as well as with Hindustani music artists such as Hariprasad Chaurasia and Zakir Hussain, besides Carnatic artists like Vikku Vinayakram and V. Selvaganesh and percussionist Sivamani. He recorded a CD of Carnatic compositions by Ilaiyaraaja called Ilaiyaraaja’s Classics in Mandolin.

Srinivas started a music school called the Srinivas Institute of World Music (SIOWM) in Chennai, where, since he was barely eighteen, he taught a number of students gratis and he has students worldwide. U. Srinivas was an ardent devotee of the Paramacharya of Kanchi and Sri Sathya Sai Baba .

Some of the awards that Mandolin U. Srinivas received:

Srinivas was an eternal explorer of music and that is evident from his words “Where is the end to music? The more you learn, the more you want to know.”

Srinivas was non-controversial and he always spoke through his music. He could retain the disarming smile and the spark in his eyes right from his childhood till his death. A very unassuming personality, humble and always down to earth and soft spoken, he will be remembered for both his musical genius and humane qualities. He combined creativity and innovation in his music yet retained the tradition of Bharatiya classical music.

Srinivas belongs to the category of musical genius and child prodigy who take birth on this earth once in a century. Bharat is fortunate to have given birth to this true Bharat Ratna who died on 19th September, 2014 at a very young age of 45 but has left behind a music treasure that would last forever.