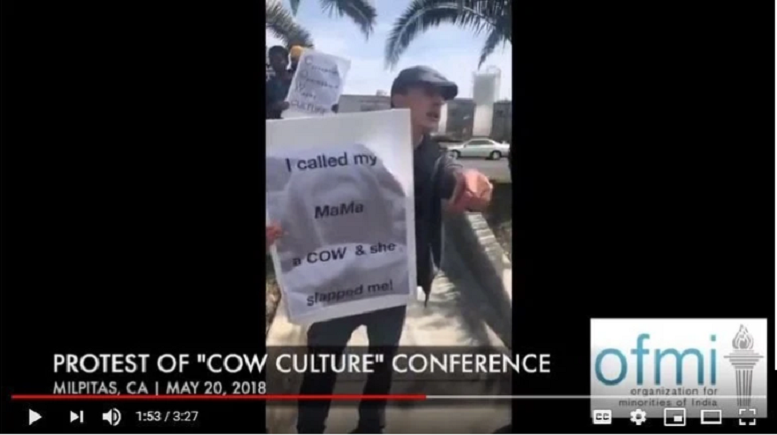 If anyone thinks that only Hindus in Democratic Party are attacked, then wait. They also attacked- Nisha Sharma (Rep), Ritesh Tandon (Rep), Shalabh Kumar (Rep), Vivek Ramaswamy (pro-Republican), Niraj Antani (Rep) and Jennifer Rajkumar (Dem). Anyone who identifies as a Hindu in the American political space is a target.

It’s interesting: self-styled “progressive” from the Hindus4rHR and Equality Labs cabal who draw their support from the “woke Left” so heavily, are perfectly fine sharing common cause with a homophobe like Pieter Friedrich

In 2020 Pieter Friedrich, travelled around the country harassing Tulsi Gabbard. Using the account of Organization for the Minorities of India (OFMI) gave paid Ads against Tulsi Gabbard in Hawaii. Guess who else was targeting Tulsi – Thenmozhi Sounderajan from Equality Labs.

In his blog titled “Pumkinhead”, Pieter Friedrich justified delayed emancipation of Black slaves. His posts from 2006, (he later deleted) are a good window into the mind of a hateful, racist, anti-Hindu fanatic. While it is easy to understand why Islamists would hire him.

It’s hard to understand why self-styled “Leftists” like those from Polis Project & “caste” activists like Thenmozhi (DalitDiva) promote Pieter. Unless of course their desire to spread hate against a common target, ie, Hindus, makes them compromise on their “own ideologies”.

Another aspect of Pieter Friedrich’s anti-Hindu hate campaign is his constant lying. Guess that comes with the propaganda he does trying to work in the intersectional space of Hindu haters (often with contradicting ideologies). In Feb 2021, he denied being associated with the pro-Khalistani terror group OFMI. He forgot that there are records of Pieter’s association with OFMI going back to 2007, in the group’s registration papers. He also brought in his brother-in-law Steve P Macias Jr, a pastor as its CFO as he became its spokesman.

Pieter uses multiple aliases to avoid being detected in multiple roles as a Hinduphobe. As a Christian fundamentalist – Peter Flanigan, As a Khalistani- Pieter Singh, Singh of Judah After his association with pan-Islamists began- Pieter Friedrich, Patrick J Nevers.

Pieter Friedrich’s ecosystem shows how Hindus are not only a prime target of racist, Hinduphobic, anti-immigrant hate. Hindu Americans, like the Jews are now the focus of foreign influence ops.

Propped by Bhajan Singh Bhinder & IAMC, Pieter is just a tip of the hate-berg that stems for unadulterated hate for Hindus. Pieter’s targeting of Gandhi shows that his use of catchphrases like “fascism” is Goebbelsian propaganda. He and his ecosystem have spent more than 5 years targeting Gandhi. Because Gandhi represents India’s soft power globally.

Just last weekend Mr. Iqbal, a Hinduphobe member of the Islamist group – IAMC, which promotes Pieter Friedrich, was ranting against “Patels” and asking Muslims not to “shop at Patel Brothers”. Eerily reminiscent of Nazi Germany’s boycott of Jewish owned business in 1930s.

(This article has been compiled from the tweet thread originally tweeted by HinduPact.)