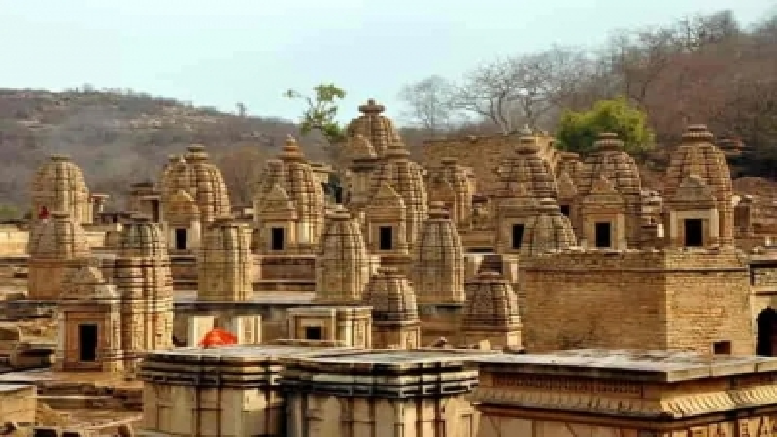 Bharat has several ancient temples which are standalone and also vast complexes housing several of these worship places. Among these Madhya Pradesh’s Bateshwar temple complex located in Morena district stands out as it has more than 200 temples dedicated to Bhagwan Shiva, Vishnu and Goddess Shakti – representing the three major traditions of Hindu Dharma.

While the temples are by and large small, they are spread out in more than 25 acres and were built between the 9th and the 11th Century by the Gurjara-Pratihara dynasty in a style of North Bharatiya temples named after them. The complex came to be named after the Bhuteshvar temple – the largest temple dedicated to Bhagwan Shiva at the site.

Explaining the significance of complex, well-known archaeologist K.K. Muhammed who retired as the Regional Director, North of Archaeological Survey of India and headed the restoration work of these temples, told India Narrative: “This site has the largest number of temples which is 200 or even more if we count those around the complex. Apart from this, Aihole temple complex in Karnataka has 108 temples. As the temples at Bateshwar are dedicated to varied denominations – Lord Shiva, Lord Vishnu, Goddess Shakti and also Hanumanji – makes it an important site.”

Some of the interesting aspects of this complex include reliefs depicting Lord Shiva holding the hand of Goddess Parvati and those narrating the marriage of Shiva and Parvati with Lord Vishnu and Brahma attending it; Nataraja on the Kritimukha or the Face of Glory — the fierce monster with huge fangs and gaping mouth who is considered symbol of Lord Shiva; friezes with interesting narratives from Bhagavata Purana; and sculptures of women playing musical instruments and men wrestling lions and riding elephants among others.

Between 2004 and 2012, the ASI team led by Muhammed started the restoration of these temples. On reaching the site, he and his team found it in shambles and smithereens.

Sharing his experience with India Narrative, Muhammed said: “It was a like jigsaw puzzle on a gigantic scale. Fortunately, unlike other sites where the broken parts of the temple are missing or destroyed, here because of the dacoits, they had remained untouched — in its pristine purity. We cleared the forest which had grown there and the mounds of debris and sorted the parts and matched them. A few standing temples were a great help while we also used Vastu Shastra and consulted treaties on temple architecture like Manasara and Mayamata.”

According to Muhammed it was a tedious and back-breaking job requiring immense patience.

The ASI is not new in restoring the lost glory of temple complexes in Bharat and abroad. Between 1986-93, the Archaeological Survey of India (ASI) restored the famous Angkor Wat temple complex in Cambodia at Angkor Wat. That work done under extremely stressful conditions. The temple area was thickly forested. Anti-government Khmer Rouge forces were present creating an atmosphere of fear. Devinder Singh Sood was the ASI team leader in Siem Reap which restored parts of Angkor Wat.

For Muhammed restoration of Bateshwar complex is very close to his heart. “On reaching the site I could feel a vibration. It was like Lord Shiva calling the innermost recesses of my heart. I knew I had to do the work, irrespective of all the obstacles.”

The work was compounded by the presence of several notorious gangs of dacoits in Morena area. Again, Muhammed rose to the challenge getting in touch with them through intermediaries. “Initially they were sceptical about a Muslim heading the restoration project of temples but once I gained their confidence, they assured all help which was basically non-interference with our staff and their movement.”

It was this passion and dedication of Muhammed and his team that saw restoration of 80 temples by ASI.