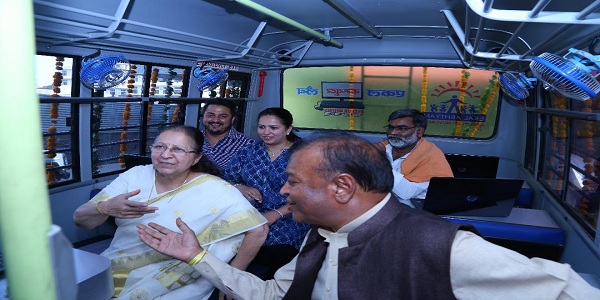 Houston based entrepreneur Amit Bhandari and his wife Arpita shaped their own American dream but along the way they also nurtured the aspirations of thousands of children, whether in the remote village of Rampura or the slums of Mumbai.

Ekal was one of the first charities the Bhandaris supported and they have consistently raised this support. They recently topped it by donating $50,000 dollars to outfit a bus with 10 laptops for the Ekal-on-Wheels Mobile Computer Labs program.

The Ekal movement which started in 1989 to transform Bharat, one village at a time, today, has a school in 70,000 villages offering free schooling, vocational training, digital competence and agricultural education. It has impacted 4 million children and 10 million families to date.

The Mobile Computer Labs initiative is working to enhance digital literacy and has helped over 50,000 children become computer literate. The solar-powered bus has pre-installed self-learning software developed by IIT, Mumbai and accommodates two students per computer. One dedicated trainer, assisted by the local Ekal teacher provides two and a half hours of training in one village.

The bus, which will serve the Khargone district of Madhya Pradesh near Indore, was inaugurated by Amit and Lok Sabha Speaker Sumitra Mahajan. Amit was impressed by how “coachable and open to learning the children were.”

However, this isn’t the first time the Bhandaris have opened their cheque book.

They support the Jain Society of Houston, donated six acres of land for the Gujarati Samaj center in Houston, wrote a quarter million dollar check to Houston Mayor Sylvester Turner’s Fund for Hurricane Harvey relief work, paid off the loans of a temple in Phoenix and raised $3 million for Magic Bus, an NGO that is deeply personal to them and aims to bring children out of poverty through a unique sports based curriculum.

Amit attributes this empathy to his modest upbringing. He is a native of Indore, Madhya Pradesh. His parents were professors but the family was always stretched financially. Despite this, his parents supported a handicapped school and were always ready to provide a helping hand.

Amit’s entrepreneurial leanings kicked in as early as middle school when he and a friend made paper bags and sold them to local vendors. At 17, he was accepted in the Rotary Student Exchange Program and attended High School in Hicksville, Ohio. America turned out to be “a tremendous experience” so much so that he got his aunt to sponsor his green card. He headed to Drexel University in Philadelphia for Chemical engineering and footed his tuition by waiting on tables. The job was a formative lesson in “time management, juggling priorities and dealing with people.”

The engineering degree landed him a job at ExxonMobil but Amit’s afterhours were spent scouting for a good business idea. He plunked his savings into a daycare, rental properties and a convenience store and in 2006, started his own company BioUrja (Urja in Hindi means energy.)  The company trades in ethanol, petroleum products, crude oil, grains, metal tubing for the oil production sector and now renewable energy. It is ranked as one of the most successful companies in Texas.

There’s parental pride in his voice when he talks of his daughter and son who spent weeks as Magic Bus Youth Leaders in slums and villages engaging with the children. The experience moved Aanya, 16, to present a paper at the United Nations outlining ways of providing nutritious food and educating farmers on employing better agricultural methods. Ansh, 14, on his part, is looking forward to spending more of his summers supporting Magic Bus programs worldwide.