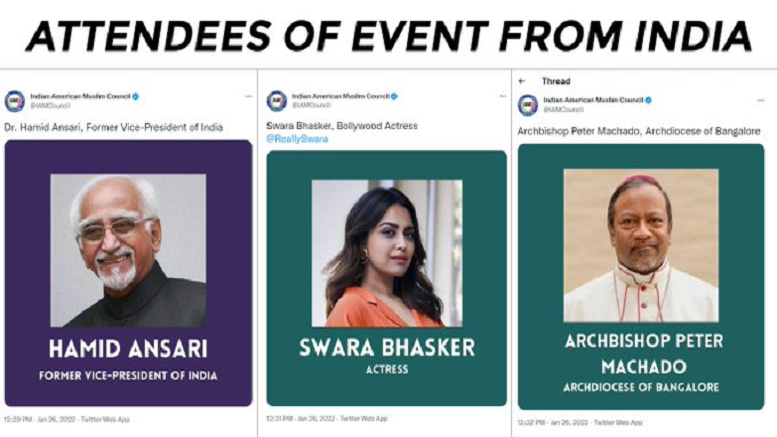 Former VP Ansari and actress Swara Bhaskar participated in an event by IAMC to ‘save pluralism’ on Republic Day. They may not know that IAMC, who paid money to get Bharat black-listed by the US, is linked with Jamaat-e-Islami (JeI) and linked with the fraud in name of Covid crisis.

IAMC founder Shaik Ubaid collected fund in the name of Rohingyas and paid to Lobby firm FGR for getting Bharat blacklisted by USCIRF. FGR head Terry Allen was a long time associate of Nadine Maenza, USCIRF Chair, who is also ‘saving pluralism’ in Bharat.

IAMC claims to represent Indian Muslims in US. It says it’s fighting against the ‘current fascist government.’ But why was it lobbying against Bharat in 2013?

IAMC is headed by Rasheed Ahmed, who was Executive Director (2008-17) of another shady front – Islamic Medical Association of North America (IMANA). At the peak of Covid crisis in Bharat, IMANA collected funds in the name of helping Bharat and robbed all money.

Director of Operations in IMANA is Zahid Mahmood, who is an ex-Pak Navy official. Coincidentally, IMANA is also linked with Islamic Society of North America (ISNA), an Muslim Brotherhood front in the US.

And to get a sense of their ideology: IAMC members like Kaleem Kawaja have been a vocal supporter of Taliban!

And there is fake news that UAPA was imposed on IAMC last year to ‘silence them’. In fact, IAMC and over 100 other social media accounts were charged under UAPA for spreading fake news to incite communal violence and reinforces the narrative of minority plight in Bharat- from fabricated stories on CAA to Tripura violence.

Our concern is that IAMC has not been exposed once or twice but multiple times by multiple organizations. Yet it seems not all people are aware of their truth (or are they?) This information should reach everyone – commoner and celebrities alike!