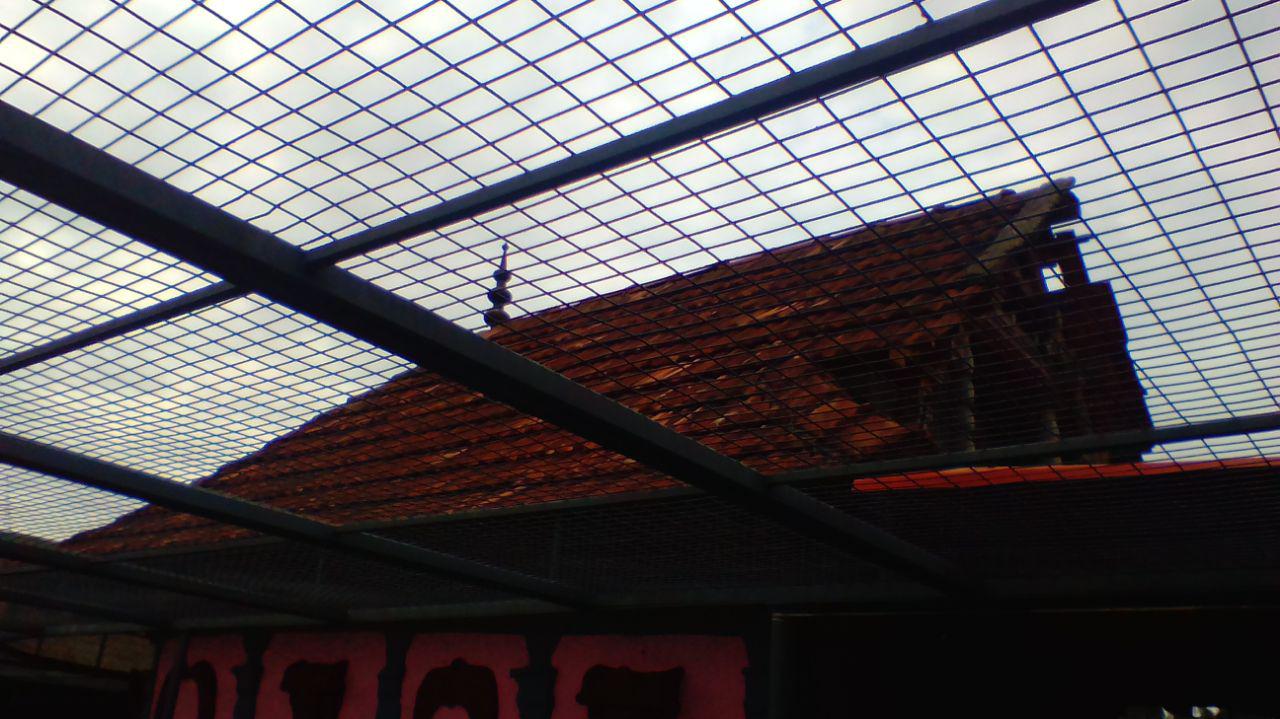 The temple in question is one of the rare temples dedicated to Vamana avatara of Vishnu – whose birth is celebrated as the biggest Hindu festival of Kerala, Onam. It is believed that the original temple was more than 7 centuries old. Sri Vilvamangalattu Swamiyaar (popularly known as Bilvamangala Thakura in Uttar Bharat – the composer of Sri Krishna Karnamruta) consecrated the deity of this temple. The temple is popularly called as Kalattu Vamanamoorthi temple (Vamanamoorthy temple of Kalad). Temple is built on an area of 1.80 acres with a further 1.56 acres ground in front of the temple being allotted as the utsava grounds of the temple (much like Ramlila maidan that we see in Uttar Bharat). The main deity is Vishnu as Vamana avatar. There are shrines for Bhagavati (Devi) and Ayyappan (Dharma Shasta). The village also had a Shiva temple in the past.

All the temples were vandalized by Tipu’s forces in the 18th century – during Tipu’s invasion of Malabar which saw widespread destruction of Hindu temples and forcible conversion of Hindus. Locals had rebuilt the main Vishnu temple along with the sub-shrines in early 19th century and the temple continued to function well. It was a well endowed institution which used to receive 12000 paras (112 tons) of paddy as annual rental revenue from the lands endowed. An annual festival of 28 days was celebrated around the Thiruvonam asterism day (Shravana nakshatra) of Tula month (Sep-Oct) in Malayalam calendar. Oottu (Annadaanam) was a daily occurrence in the temple.

1921 saw the widespread Moplah riots during which the local Muslim rioters indulged in wholesale butchery of local Hindu men with unspeakable atrocities committed upon the women and children. The famous temple was looted and desecrated again during these riots – the murtis being broken and temple vandalized in general. Temple was partially restored within a decade but collection of rent from Muslim tenants of temple lands became a huge exercise – they had to be legally forced to pay the just rent. Still, the temple sustained itself in a functional form till land reforms legislations in post independent India took away the source of the temple’s income.

As per the locals, no annuity is paid by the Kerala government as compensation (whereas the Kerala Land reforms Act requires that a perpetual annuity shall be paid as compensation to the religious institutions). The lack of income combined with poor state of local Hindus (both in numbers and money) lead to the famous temple being abandoned. By 1970s, the temple was lost to wild undergrowth and the partially rebuilt temple had nothing left but ruins. The utsava grounds of 1.56 acres were occupied by a local Muslim family.

The turnaround started in 1980s when a few local Hindus earned well due to emigration to Gulf as well as becoming entrepreneurs. A few local Hindus who were undergoing a vrata to visit Sabarimala temple decided to visit the old temple ruins for their daily worship. The weeds were cleared and lamps were lit before the shrines of the deities. The temple land was reclaimed by the Hindus and a portion of the land was utilized to build a new temple for the three deities. Legal action was initiated against the occupier of temple utsava grounds and the illegal occupation was put to an end.

Today, a smaller but well functioning temple stands at this place of Vamanamoorthi in Kalad. One portion of the original 1.80 acres has been converted into a Hindu middle school (Named Saravasti Vidya Mandir) under the control of the temple. The school is attended by local Hindu students from nearby areas. The school also imparts dharmic education – which has resulted in the next generation of Hindus being brought up with more dharmic awareness.

The newly built temple has a small shrine dedicated for the Shiva who was earlier enshrined in a temple (which was completely destroyed by the Islamic extremists). As not even the parts of the original Shiva lingam has been left around, the deity has been invoked on an empty platform and Shiva is worshipped as arupi (without a form) in this temple – as though as a reminder of the past as well as the fact that the Gods are present even when their abodes are destroyed by the invaders.

As of today, the temple has a priest who does pujas in morning and evening. Festivals are celebrated in the temple for Vishnu, Bhagavati and Ayyappan. The 28 days long utsavam has been compressed to a one day festival now due to lack of the resources which the temple commanded earlier. Annadanam occurs only during festival days – the earlier practice of daily annadanam has not been started yet due to lack of funds.

Despite these shortcomings, compared to its glorious past, the rebirth of this temple has given a sense of bhakti and identity to the local Hindus who are proud of their past as well as their religious beliefs. The Hindus of the locality are running the temple efficiently – the temple serving as a bonding place as well as a place of spiritual solace for the beleaguered community. On the other hand, this temple also serves as another example for apathy of the government towards Hindu religion and temples – temples denuded of their wealth by the government and no proper provision made for their survival either. Thankfully, Hindus are waking up from their slumber and taking steps to protect their heritage now.