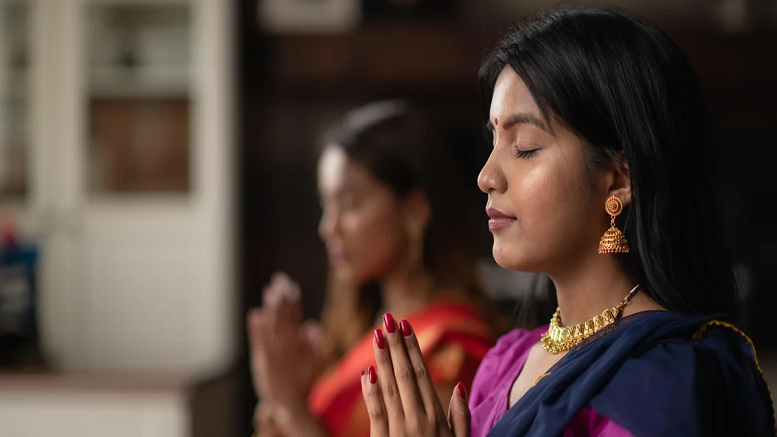 We Hindus are not supremacists. We don’t say our Gods are better than yours, nor do we say that ours are the only Gods. We have Gods — plural — though we consider the Cosmos (Hiranyagarbha) as one, the Cosmic One, immanent, not “a” God, sitting somewhere with a white, black, brown, or red beard, waiting for “His” faithful. Our Gods — Devas, Devatas, Aadityas — come in many forms, shapes, colors, sexes. We bathe them, sing to them, perform their marriages, offer them food, seek their blessings. They are male, female, both, none. But all is One.

We are not monopolists. We do not want to shut you up, demonize your faith, nor speak ill of your God. And this important point to note: We do not attempt to make the world Hindu. We don’t want to convert you. When you are in trouble, we do not come with bread (or rice and curry) in one hand, and the “Bhagavad Gita” in the other. We don’t ask you to forsake the God you grew up with and believe in. We do not demonize, mock or belittle your faith, like the proselytizing ones do. We believe in living and letting live. We think of the world as Vasudhaiva Kutumbakam — one large family. Those verses warn us that it is only the small-minded who discriminate between their family, their kith and strangers.

We are not “religionists.” Hindu Dharma is not a “religion of the book,” nor a “prophetic religion.” We are not merely believers. We do not merely have faith. If ours is a religion at all, it is the “religion of the library” (as our sacred texts include the “Vedas,” the “Upanishads,” the “Aagamas, the “Puranas” and the “Itihaasas”). These texts offer deep philosophical insights about the nature of knowledge, the nature of being and life, about the nature of the “I”, of consciousness, ego, mind, and memory, along with a celebration of life and the worship of “It” in its myriad forms:

The Rig Veda, the oldest extant human text, mentions mind/consciousness more than 100 times. Read others’ sacred books, which thump they do and sell in the millions, and you will find little if nothing about consciousness. Now, “consciousness studies” is all the rage among philosophers, cognitive scientists, physicists, artists, social scientists. We contemplated the human condition, not sipping tea, shooting the breeze, or putting electrodes all over your bodies, but in deep meditation, seeking transcendence, insight, illumination.

We do not believe the world was created in six days by “God” who rested on the seventh day. Our one day and one night of Brahma (not Brahman, but Brahma — of the Hindu trinity — Brahma the Creator, Vishnu the Sustainer, and Shiva the Destroyer) equals 8.64 billion earth years, and Brahma’s lifespan is 100 years —more than 311 trillion Earth years. The universe dissolves after these 100 years. But wait: It reemerges after another 100 years of Brahma. This is the Hindu cosmic scale. This cosmos, this “Hiranyagarbha” — the “universal womb” — is also a speck, the size of an atom — epitomizing/symbolizing the relationship between the individual soul (aatman) with the cosmic soul (Brahman). We consider our words, our texts sacred, for “vaac” (speech) is the origin of the universe and “Naada Brahman” is the universe of sound, the cosmic hum that is beneath, above and surrounding all.

Our view of history is fluid, and we remember not to claim or own something, some place, some honor, or some privilege, or to challenge others, but for lessons and directions in leading the dharmic life — following Dharma — the universal law.

We believe in Karma — action, and the fruits thereof, which may result in the shaping of future lives of the individual. That means we believe in reincarnation, birth and rebirth, based on our karmas. These kaarmic results occur through the medium of samskaras (psychological imprints in the subconscious) and vaasanas (subtle desire that remain or persist in memory).

This is the Hindu world of faith, belief, reason and understanding. But Hindus are a microminority in the United States, and these days we are the target of progressives, liberals and other soul-harvesters, grandstanders and moral majorities, who wish to paint the word “caste” on our backs and make us targets of their demonization campaigns or save us from ourselves and our bad karma. They seek to cancel us en masse for they do not like our success, our striving, our dedication to family and to minding our business, and our support for law and order. They cannot gauge the depth of our understanding of the human condition, so they label us as ignorant or bigoted.

That makes politics a difficult arena for us to enter, let alone prosper in. Given the diversity of our ways of worship, faith, beliefs and philosophies, Hindus are an easy target to attack, to sow divisions in or to marginalize. The politics of the left and the right, of those labeled Democrats and those labeled Republicans, confuses us. We have mostly voted Democratic until recently because Democrats seemed more accepting of immigrants, and are willing to taste our foods and listen to our music. However, most Hindus are conservative in their social outlook — holding on to their families, believing in hard work and discipline, knowing that promiscuity of any kind leads to disease and discomfort, that faith and devotion offer deep succor, and that it is the individual who journeys toward liberation and enlightenment rather than the group that marches into heaven or is doomed to stumble into hell.

We worry about the lack of interest in and the understanding of our great traditions — art, culture, music, philosophy, books — among those who call themselves conservatives or Republican, and we are afraid of the attacks by those who call themselves progressive and Democrats who are intent on dissecting and disemboweling our traditions, texts and Gods, marking us as targets for “re-education” and seeking new ways to rob us of our livelihoods and of our peace of mind.

The sustained campaign against “caste” (the University of California, Davis and the Cal State University system recently added caste as a protected category in their anti-discrimination policies, as did Harvard), with a flurry of articles being published in major legacy news outlets and in academic journals about Bharatiya students being discriminated against by other Bharatiyas based on their “caste status.” Isabel Wilkerson’s “Caste” has mostly been used to beat Hindus rather than to evaluate the race, color, and class dynamics in the United States.

The messy nature of American politics now, and the increasing divide between the right and the left, make Hindu Americans like me, who have consistently voted Democratic, worry about our political status and our social wellbeing in this society, and confused about who to vote for next.

Our colored status, strangely enough, does not seem to offer us the buying power in Democratic politics that other privileged colored folks seem to have, despite the monopolist and supremacist faiths they belong to and propagate, or their constant drumbeat about being victims of various phobias.

In Republican circles, with their obsession about former President Donald Trump, and revanchist dreams about white, European, Western, Christian reemergence as the world’s saviors, what Hindus find is temporary, unsafe shelter.

We are indeed caught between the devil and the deep sea. But our despair is leavened by the knowledge that this cosmos is big, and there is more than one life to live.

(This article was published on thefulkrum.us on February 18, 2022 and has been reproduced here with a few minor edits to conform to HinduPost style-guide.)