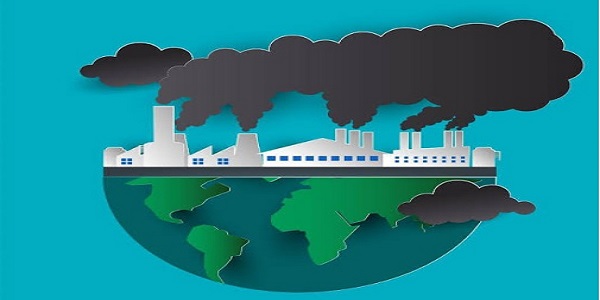 Bharat is a land where natural forces are worshipped as divine power and Mother Nature is been revered as the nurturer of humankind on the planet. From tree, water to air and fire, Bharatiya tradition and culture has always paid great reverence and homage to life giving factors of earth.

The ancient tradition, along with including natural forces into its pantheon, has also stood firm on grounds of protecting it. But by the time advanced and human greed expanded, the practice of practical worshipping of natural forces was exceedingly becoming stymie. Grievous over exploitation of natural resources over the past century has pushed the life giving earth into a dangerous life threatening circumstances.

Climate change, a change in global and regional climate patterns caused due to pollution and excessive wringing of natural resources, is a catastrophic tragedy which has girded the entire planet in some way or the other. Effects of climate change in some countries including Bharat is vastly cataclysmic and ruinous.

Bharat is extremely vulnerable to climate change. It is already experiencing a consistent decline in monsoon rainfall coupled with increase in average temperature over the years. Unprecedented and wayward heat waves have increased and frequency of heavy rainfall has witnessed a decline in Bharat, which can have calamitous effect throughout the nation.

“An abrupt change in the monsoon could precipitate a major crisis, triggering more frequent droughts as well as greater flooding in large parts of Bharat. Bharat’s northwest coast to the south eastern coastal region could see higher than average rainfall. Dry years are expected to be drier and wet years wetter” says the World Bank.

Droughts are expected to become more frequent and severe. Agriculture output will be at stake of vast decline due to heat waves. Energy security, water security and food security witnesses a adverse challenge from climate change, putting millions of lives at stake. At 2.5°C warming, melting glaciers and the loss of snow cover over the Himalayas will threaten the stability and reliability of northern Bharat’s primarily glacier-fed rivers.

Controlling the climate change and ensuring better environmental stability for the nation and the world is of paramount significance for every government. Bharat is set to become world’s most populous nation by 2025 and hence, is a major player in global climate governance.

Bharat under Modi has been hailed by international policy makers as ‘global green leader’. Almost every country of the world sees Bharat as either a global leader or a potential global leader in the fight against climate change. The Executive Director of the United Nations Environment Programme Erik Solheim pointed to Bharat’s economic growth and how Modi has turned the country from an ‘environmental laggard to environmental leader’ nation.

The world is critically dependent on Bharat for its ambitious world environmental policies and Modi has been successful in pushing Bharat’s climate change agenda forward in the international politics. Modi has often heard pointing out the two major challenges to the world prosperity – terrorism and climate change.

Bharat has been a leading voice in international climate change negotiations and has argued for clear distinctions between developed and developing economies’ approaches. Bharat has, as representative of developing economies, demanded leadership from developed countries before committing to reducing their own emissions. However, at the same time Bharat has also ensured active cooperation between both forms of economies for the betterment of global environment.

Formation of International Solar Alliance (ISA) jointly by Bharat and France is an example of Bharat’s varied and cooperative strategic approach towards solving climate problems. 121 countries have joined ISA making it a grand global success with Bharat being the leader of it. ISA, an cooperative organisation with largest investment from Bharat, is a dawn of new international climate diplomacy lead by Bharat.

The country has performed exceptionally well in power sector, energy efficiency and renewable energy usage. Bharat is consistently enhancing its existing energy infrastructure while at the same time building new efficient infrastructure for future energy requirements. Bharat’s power capacity and sustainability has increased in many ways. Although it’s true, there are loads of consistent targeted reforms required and mission mode programmes needed to be launched, but the country is showing strong intents and ambitions.

The solar and wind power tariffs in Bharat dived down to all time low of Rs 2.44 per unit and Rs 3.46 per unit in tariff based competitive bidding conducted by Solar Energy Corporation of Bharat (SECI) in 2018. “IEA said Bharat’s move to address the financial health of its utilities and tackle grid-integration issues drive a more optimistic forecast.” reports a Livemint piece.

Bharat, country with Asia’s second largest power capacity, had a massive 363.3 GW of power capacity till 2018 which is expected to increase by 69% through 2027. By 2030, Coal Energy, witnessing a whopping decrease, will account for 50% of total power generation and Solar Energy 23%, according to a report. By 2030, Solar and Wind will constitute 50% of Bharat’s total energy production. If the country progresses consistently then by 2030, PM Modi’s target of achieving half of Bharat’s power production from green energy sources will be achieved.

The grand success of the country in renewable energy can not be attributed single handedly to Modi’s government. Previous regimes have also, with comparatively lesser ambitions, carried forward the mission of reforms in energy sector and have, with lesser substance, furthered the cause of green energy. But Bharat in the past decade has set a new example trailing a blaze in green energy consumption. Fight against climate change has intensified over the years with establishment of base for comprehensive actions aiming better greener future.

The country is suffering from severe water crisis, is effected by smoggy air qualities worst in the whole world, global warming is heat stroking the agriculture and social life and the danger clouds of climate change are hovering over the sky. The government and society are required to bring in quick eco friendly reforms and concentrate on changing the past feeble approach.

Lack of incentivised mission mode reforms is dragging the country behind in fight against climate change. The establishment’s sluggish, languorous and lackadaisical approach towards solving the catastrophic situation of pollution, global warming and climate change is still a cause of worry and a hard nut to crack.

New government of Modi, termed as Modi 2.0, must focus on establishing an eco friendly system of governance in the government with sophisticated planning and execution. The vintage offhand and slothful approach towards an exceedingly dangerous problem of climate change must not be allowed in the current government for the collective betterment of the entire world.

Bharat will soon overtake United States as the second largest emitter of carbon dioxide in the world and the wrath of pollution in the country is expected to grow in the coming years. Hence, it is incredibly significant for the current regime to bring in targeted reforms and comprehensive planned programmes for the future.