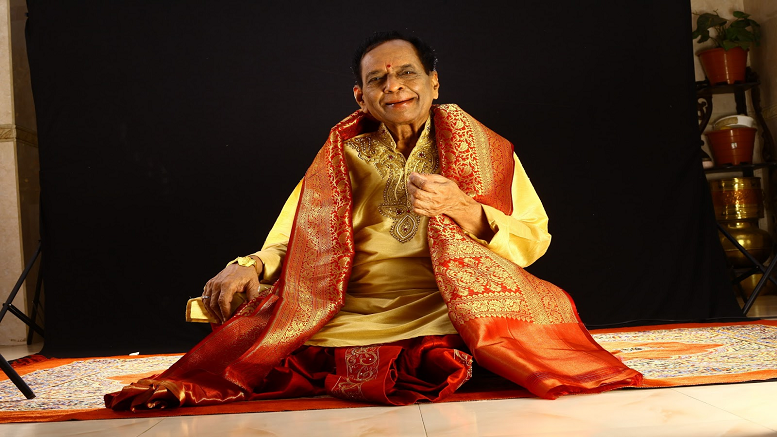 Mangalampalli Balamuralikrishna was born on 6 July 1930 in Sankaraguptam village, East Godavari District, Andhra Pradesh. His father Pattabhiramayya was an artiste with expertise in playing the flute, violin and veena, while his mother Sooryakantamma, daughter of the renowned composer Prayaga Rangadasu, was an accomplished veena player.

At a very young age MuraliKrishna showed keen interest in Carnatic music and his father approached Parupalli Ramakrishnayya Pantulu (1883-1951) to accept eight-year-old Muralikrishna as his student. Parupalli Ramakrishnayya belonged to the “Shishya Parampara” (student lineage) of the saint poet Thyagaraja (1767-1847), one of the famous trinity of Carnatic composers. He was fourth in the line of Guru Parampara starting from saint Tyagaraja, after Akumadugula Manambuchavadi Venkata Subbayya and Susarla Dakshinamoorthy Sastry.

With his Guru Parupalli Ramakrishnayya’s blessings Muralikrishna made his debut at a music festival that was conducted in the memory of Susarla Dakshinamoorthy Sastry in Vijaywada on July 18, 1940. Listening to the young Muralikrishna’s concert, the great Harikatha exponent Musunuri Suryanarayana Bhagawatar gave him the title of “Bala”. Thereafter Muralikrishna came to be known as Balamurali Krishna.

By the age of fifteen he had mastered all the 72 melakartha ragas (i.e., fundamental musical scales in Carnatic music and parent ragas) and had composed krithis in the same. The Janaka Raga Manjari was published in 1952 and recorded as Raagaanga Ravali in a nine-volume series by the Sangeeta Recording Company.

Balamuralikrishna debuted on All India Radio on July 2, 1941 and became very popular thereafter and started giving concerts. In January 1942, Balamuralikrishna accompanied his guru to the Thyagaraja Aradhana an annual commemorative concert conducted in honour of Thyagaraja in Thiruvaiyaru (Thanjavur district) in Tamil Nadu.

The legendary singer Bangalore Nagarathnammal, who constructed the samadhi of Thyagaraja was so impressed with Balamuralikrishna’s music and predicted that the child would one day be a genius in the world of music. In 1944, Balamuralikrishna accompanied legendary Carnatic vocalists like Ariyakudi Ramanuja Iyengar and Chitoor Subramaniaya Pillai on the viola. He was only 23 when he was honoured with the President of India’s gold medal in 1953.

Bhakti Ranjani programme of devotional songs originally launched by Balantrapu Rajinikantha Rao in All India Radio, Vijayawada was aired every day early morning. As producer at the All India Radio, Hyderabad, Balamuralikrishna took personal interest to make it very popular. He was awarded the All India Radio’s “Top Grade” for seven different performance areas.

In 1967, Balamuralikrishna debuted on the silver screen in the famous mythological Telugu film Bhakta Prahlada, starring great actors Anjali Devi and SV Ranga Rao. Balamuralikrishna played the role of sage Narada and sang his own songs in the film. As an actor, music director and playback singer, he contributed to over 30 films in Tamil, Telugu, Kannada, Malayalam and Sanskrit.

In 1976, he bagged the National Award for best playback singer for his work in the Kannada film Hamsageete (1975) and in 1987, he won a National Award for best music direction for the Film Madhawacharya, a unique distinction for a Carnatic musician. He was awarded the Chevaliers of the Ordre des Arts et des Lettres from the French Government in 2005.

From the 1960s to the 1980s, Balamuralikrishna did research in renewing the works of poet saints like Tallapaka Annamacharya, Bhadrachala Ramadasu, his (i.e., Balamuralikrishna’s grand father) maternal grandfather Prayaga Rangadasu, Sadasiva Brahmendra and the composer Maharaja of Kingdom of Travancore, Swati Thirunal Rama Varma . His creativity invited several foes in Carnatic music from the traditionalists who even went to the extent of disturbing his music concerts. Yet he was undeterred and continued his path of music.

He was also one of the first vocalists to sing the entire 12th century Sanskrit text Gita Govindam written by poet Jayadeva.  He performed Jugalbandis with his contemporaries in Hindustani music – Pt. Bhimsen Joshi, Pandit Hariprasad Chaurasia, Pandit Ajoy Chakrabarty and  Kishori Amonkar.

Balamuralikrishna was also an expert in playing the kanjira, mridangam, viola, and violin. Viola is basically a western instrument and Balamuralikrishna experimented it in Carnatic music and gave several solo viola concerts and also accompanied eminent musicians on the violin.

He is also credited with innovating Tala systems. He has also presented Rabindra Sangeeth for All India Radio and performed it in Dhaka, Bangladesh. He was honoured as state musician of Tamil Nadu and Andhra Pradesh and Asthana Vidwan of Sringeri Peetam and Tirumala Tirupathi Devasthanam. He performed a rare concert, for the first time in the history of TTD, in front of the ‘Maha Dwaram’ of the temple in 2008 with thousands of devotees attending the event.

He appeared as featured soloist with an award-winning British choir, performing the “Gitanjali Suite” with words from Rabindranath Tagore’s Nobel Prize-winning poetry and music by Dr. Joel, the noted UK-based Goan composer. Balamuralikrishna has sung in French, and even ventured into jazz fusion. He wanted to pursue music therapy which he was very passionate but gave it up due to paucity of funds.

Balamuralikrishna was a singer, composer, music director, actor and an instrumentalist who was an expert in playing various instruments. He was a rare musician who mastered the science of Carnatic music, followed the tradition yet was innovative with his creativity. His diction was impeccable and his voice was not only mellifluous but very expressive. His presence of mind on the stage was unique that captivated the audience.

In the words of Swami Chinmayananda, “It is not frequent that a nation discovers a Balamuralikrishna in its history”. Balamuralikrishna was a precious jewel to Bharata Mata and will continue to remain so though he passed away on 22 nd November, 2016. He was honoured with Padma Vibhushan in 1991.

Hope the government will award him Bharat Ratna posthumously by taking a corrective action for not honouring him when he was alive.