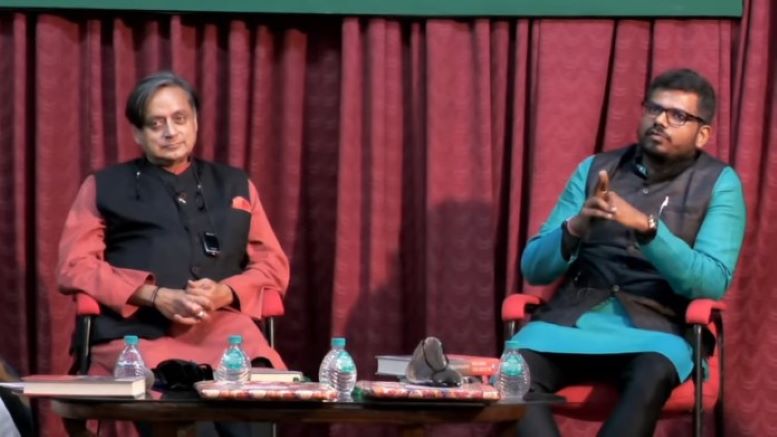 The debate between advocate J Sai Deepak and Congress leader Shashi Tharoor on ‘Idea of Bharat’ on the occasion of the latter’s book launch was enlightening, to say the least. Sai Deepak brought out several important points to the fore during the course of the discussion.

Tharoor said his book “The battle of belonging” was his ‘personal meditation’ on nationalism and that he has attempted to interpret the concept in the Bharatiya context by using essays of Tagore, Orwell, and other great thinkers on nationalism before putting down his own thoughts on the subject.

Drawing a distinction between patriotism and nationalism, he said that the former stemmed from a love for the country that comes from a sense of belonging while the latter is the idea of a country as a state. In his opinion, the basic difference is that a patriot is prepared to die for his country and a nationalist would kill for his nation.

Tharoor laid emphasis on the constitution rather than the civilization as his idea of Bharat while adding that Hindi, Hindu, Hindustan was the alternative idea as advocated by the opposite side in which case the constitution would be exclusively for Hindus unlike the equality of all as enshrined in our constitution. He further emphasizes that the idea advocated by Veer Savarkar, Guru Golwalkar, and Pandit Deen Dayal Upadhyay is incompatible with Bharat’s constitution.

While beginning his counter to Tharoor, Deepak states how his recently launched book “India that is Bharat” happens to be an inadvertent rebuttal to Tharoor’s book. Deepak pointed out how it was Chandranath Basu who coined the term Hindutva in 1892. He opined that Tharoor’s book takes a truncated view of what is dubbed crudely as Hindu nationalism.

Deepak believes the awakening of Hindus to their civilization is an attempt to reaccess Bharat’s past as well as reinscribe certain values of the past in the present institutions and thereby create a more indigenous future. He states that the idea is to create a future where the quotient of indigenity is higher than that of coloniality.

He further pointed out how Hindu nationalism is being projected as an exclusive ideology that comes at the peril of endangering the minorities. This he says is imposing the guilt of European nationalism on Bharatiya consciousness.

Deepak makes a very important point when he states “every mistake, every folly, every massacre, or every genocide which was perpetrated in the name of European nationalism is somehow consciously and unconsciously sought to be transposed onto Bharatiya reawakening“. He terms this reawakening as Bharatiya Dharmik civilizational reawakening.

Deepak also presented a factual rebuttal of the general notion that a Hindu Rashtra was antithetical to the constitution by citing the example of Hindu Mahasabha’s draft constitution. He said that this draft constitution also gave the minorities equal rights and hence, even if we didn’t have the concept of contemporary constitutionalism that emanates from Europe, Bharat as a civilization has thrown open its doors to those who were willing to live with us.

He cited the examples of Jews and Parsis who sought refuge in Bharat when they were persecuted in their homelands. Attributing large-heartedness to the constitution at the cost of the civilization is a grave injustice. It must also be noted that despite the horrors of partition and the two-nation theory that was foisted on us, Bharat has done a better job of protecting its minorities than its Islamic neighbors.

Deepak also points out that the reference to ‘Hindu Pakistan’ made by Tharoor in his book is erroneous because accommodation is something that comes naturally. Western-style assimilation requires one to convert to their way of life whereas the Bharatiya ethos of accommodation allows people to keep their culture alive in the most pristine form possible as long as it doesn’t interfere with others’ way of life. Reference to public morality in constituent assembly debates has also been drawn from the reservoirs of Dharma opines Sai Deepak.

Indic reawakening shouldn’t be reduced to identity politics. He believes that consciousness is more important than identity. Deepak also points out how a straw man has been created by trying to show Hindutva as an ethnocentric concept that is obsessed with race and is just another form of xenophobia. Anyone is welcome in Bharat as long as they don’t look upon Hindus as sub-humans.

While talking on Swami Vivekananda’s Hindutva, Sai Deepak pointed out to Dr. Tharoor that Swamiji was clear about the fact that universalism can’t come at the cost of pixelation of history. He also highlighted how Swami Vivekananda was against proselytisation by taking Hindu toleration for granted. He cited the example of Swamiji threatening to throw a missionary overboard when the latter was constantly spewing venom against Hindu Dharma.

Sai Deepak concludes by bringing forth the point that secularism is being used as an excuse to prevent the Hindu majority of Bharat to access its past. Therefore, unlike the frankness with which stalwarts such as Swami Vivekananda, Veer Savarkar, and others could deal with the issue, at present inconvenient truths of Hindu persecution, such as Kashmiri Hindu persecution, Hindu genocide in post-poll West Bengal, etc. are being brushed under the carpet.

The essential points brought forth by Deepak in his concluding remarks are how only Hindus are constantly being to scrutiny, that nationalism espoused by a European colonist is not the same as that espoused by a Bharatiya who is a victim of colonization, Dr. Ambedkar’s regret at having drafted the constitution that was being misused by the Nehruvian dispensation, and how India is currently surviving at the expense of Bharat.