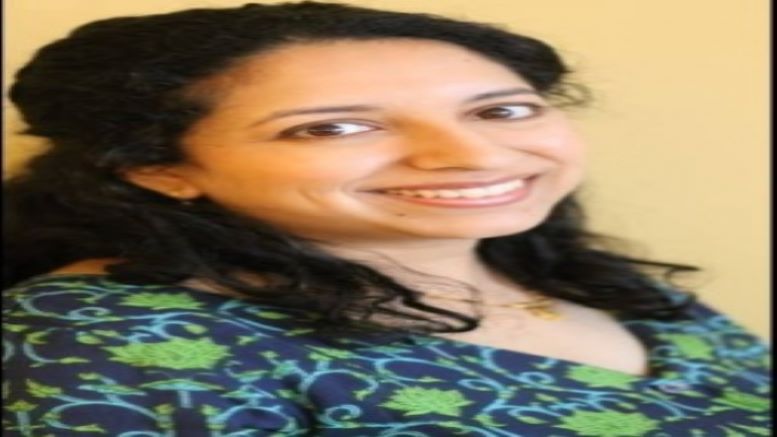 Anasuyabai Kale played an active role during the freedom movement for which she was jailed and refused to apologize in return for being released. One of Bharat’s first women parliamentarians, she was the inspiration for her great-granddaughter Supriya Kelkar’s debut novel “Ahimsa”.

The author, who was born and brought up in the US Midwest, has now stepped back further into time with a book on the Bharat of 1857 and the First War of Independence to challenge the “so-called classics, which romanticize colonialism instead of showing it as the brutal act it was”.

“I hope it sheds a light on what was actually happening. I hope teachers and parents can use the book to further discussions on colonization and decolonizing in schools. And I hope it is eye-opening for adult readers as well,” Kelkar told IANS in an interview of “Strong as Fire, Fierce as Flame” (Scholastic).

“It is important to know the history and think about whose story is not being centered or not being told by the current narrative in order for us to all work toward decolonizing the way we think.

“I hope this book helps readers on that journey,” added Kelkar, who also wears the hat of a Bollywood screenplay writer.

“Ahimsa” revolved around 10-year-old Anjali, who is devastated to think of her father risking his life for the freedom struggle. But he isn’t the one joining – Anjali’s mother is. With this change comes many more adjustments designed to improve the country and use non-violent resistance to stand up to the British colonizers.

Anjali is forced to get over her past prejudices as her family becomes increasingly involved in the movement. When her mother is jailed, Anjali must step out of her comfort zone to take over her mother’s work, ensuring that her little part of the independence movement is completed.

In a similar vein, the narrative in Kelkar’s new book orbits around 13-year-old Meera, who is on the run, escaping life and death she has no say in, while Bharatiya soldiers rebel against their British commanders in the First War of Independence. As she finds her strength and confidence, she must choose between helping the cause of the uprising for the greater future of the country, and her plans for her own secure future. Will she be as strong and fierce as fire as she writes her own destiny?

Like its predecessor, “Strong as Fire, Fierce as Flame” is a book that was just waiting to be written.

“I was born and raised in America at a time when there wasn’t any Desi representation in American books, TV shows, movies, commercials, store catalogs, or even in junk mail advertisements. The only representation in the 80s and 90s was the incredibly racist character of Apu on the Simpsons who wasn’t played by a South Asian actor. Many people around my age, including me, were bullied mercilessly because of that character as kids,” Kelkar said.

“But one day in elementary school, our teacher was reading ‘The Secret Garden’ to us. I remember sitting up taller, recognizing Indian characters for the first time ever in a book in school. And then I remember quickly sinking in my seat because characters weren’t even thought of equals. They were just there to serve the main character even when the story took place in their land. They were just part of the background.

“As an adult, when I thought back on this experience, I wanted to write a book that challenges these so-called classics, which romanticize colonialism instead of showing it as the brutal act it is. I wanted to challenge who we center and whose story is erased in stories from this time period, but also in all stories, whether fiction or non-fiction and what is taught in school,” Kelkar elaborated.

“We are often taught that colonizers were brave explorers who discovered new lands and saved the backward indigenous populations. It is a narrative we see in the formation of America as a country and in stories and textbooks around the world. And it is totally false.

“The reality is colonialism is a brutal practice, the effects of which can still be seen today. Millions of South Asians died due to colonization. Trillions of dollars were stolen from India and South Asia and sent to the West. So many advancements were made due to this money.

“We are taught about the industrial revolution in school in America but not the fact that it was partly possible because of money being looted from colonies. Many of the world’s poorest countries today are like that because they’ve been looted.

“I wanted to shed light on this for readers of all ages and really empower and inspire them to decolonize their bookshelves, their beauty standards, and their minds,” Kelkar maintained.

Considerable research went into the book. Unlike “Ahimsa”, which takes place in 1942 and Kelkar could ask relatives about the era because they lived through it, there was no one around who had lived through the events of 1857.

“I was fortunate that my family friend is a professor who was able to direct me toward some very old books written by British colonizers in the 1600s through the 1800s.

“The books were tough reads, seeing how brutally they looted the land and seeing all the racist, derogatory thoughts the colonizers had toward the indigenous people. They referred to them as animals, as less than. They judged the religious practices, the native customs, the lifestyle.

“The way the colonizers portrayed South Asians is important to note because these were the stories other parts of the world were hearing. Memsahib’s journals were one of the ways people in the U.K. heard about India. They were oftentimes racist writings and I felt this sickening sense of injustice as I read them,” Kelkar elaborated.

Quite naturally, all this had to be presented in its truer perspective.

Thus, there is a lengthy historical note at the end of the book that details “a lot of the true-life incidents that I put in the book, including some of the real racist words used by the colonizers”, Kelkar said.

How did the Bollywood journey happen?

“Because I grew up without representation in the media and in a town that didn’t value diversity, where racism was a daily part of my childhood… Hindi movies gave me the one place where I felt seen. Bollywood was a space where people who looked like me were heroes, where my food and culture and music were celebrated,” she said.

When she was in middle school, she decided she wanted to become a Hindi movie screenwriter when she grew up. Her father is an engineer but had written some Hindi films in the early 1980s, so that love for film and writing ran in the family. She studied film and screenwriting at the University of Michigan and met Vidhu Vinod Chopra when he came to deliver a talk.

“I had written a thesis analyzing several Hindi films in film school, one of which was “Mission Kashmir”. So I handed him the paper after his talk, expecting he would never read it.

“A few weeks later, I came home to my college apartment to hear a message from him on my answering machine.

“I started working for him right after I graduated, first as a writing assistant and then as a member of his writing team for over a decade,” a saga she has detailed in “That Thing About Bollywood”.

“I use a lot of what I learned working in Bollywood in my books. I hope that comes across as a very thrilling, moving, visceral adventure in “Strong as Fire, Fierce as Flame”, Kelkar concluded.