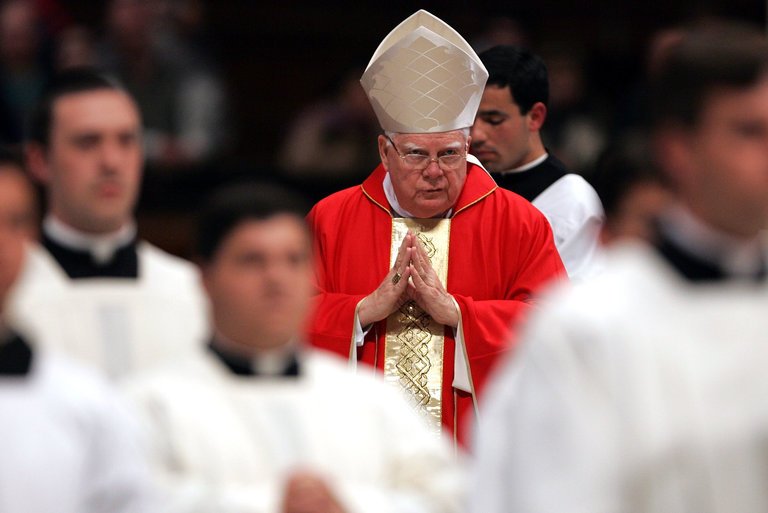 Cardinal Bernard F. Law, whose stature as archbishop of Boston and America’s senior Roman Catholic prelate was shattered in a maelstrom of scandal, acrimony and resignation in 2002 after revelations that he had protected abusive priests for years, has died. He was 86 and lived in Rome.

The death was confirmed by a church official who declined to be identified.

He was a staunch defender of church orthodoxy, a Harvard-educated advocate of social justice for immigrants and the poor who had campaigned for civil rights in the segregated South. And when he arrived in Boston in 1984 as Pope John Paul II’s new archbishop, he was welcomed like a favorite son.

Over the next 17 years, he became one of the nation’s most influential churchmen, a protégé and confidant of the pope, a friend of presidents, a force in politics who traveled widely, conferred with foreign leaders and nurtured Catholic relations with Protestants, Jews and others. Admirers thought he might become the first American pope.

His popularity was hardly universal. Some of his own clergymen called him arrogant and autocratic. To critics, and even to many Catholics who questioned church doctrines, he embodied the patriarchal, authoritarian ideologies of a hierarchy that rigidly opposed abortion, birth control, the ordination of women and changes in the traditional celibacy of an all-male priesthood.

In Boston — perhaps the emotional heart of the church in America, but a city with a history of racial troubles — Cardinal Law was a voice for tolerance, and became part of the city’s political and social fabric. His annual garden party drew leaders in government, business, the arts and society. In 2001, Boston magazine put him fourth on its “power list,” just behind Senator Edward M. Kennedy.

In January 2002, however, the scandal of child molestation by priests that had been gathering across America for years hit Boston like an explosion. It erupted when a judge released documents in the case of the Rev. John J. Geoghan, a defrocked priest who had been shifted among a half-dozen parishes amid accusations of abusing 130 boys over 30 years.

The cardinal, who had once acknowledged transferring Father Geoghan to another parish, apologized, saying he had relied on flawed psychiatric assessments.

In the ensuing months, hundreds of people came forward to say they had been molested by priests in the archdiocese. Lawsuits and criminal investigations began. In response, 25 priests were removed and the cardinal gave prosecutors the names of 80 priests accused of abuse over decades. But when authorities sought further details, they said he became vague and reticent, citing sketchy records.

Abundant information was found, though, in a personnel file on the Rev. Paul R. Shanley, disclosed by a plaintiff’s lawyer. It said Cardinal Law and his predecessor, Cardinal Humberto Medeiros, knew of dozens of pedophilia accusations against Father Shanley but allowed his continued contacts with children.

Voice of the Faithful, a lay Catholic group formed in response to the crisis, questioned Cardinal Law’s role. As the scandal widened, demands for his resignation grew. They peaked in December 2002, when church documents released by plaintiffs’ lawyers showed that Cardinal Law for years had transferred abusive priests without telling parishioners or law-enforcement officials, and that he had been more protective of the priests, and less of their victims, than he had allowed.

Nearly 60 priests signed a letter asking him to resign. Polls showed that three-quarters of the churchgoers in an archdiocese of millions believed that cases of pedophile priests had been covered up. Cardinal Law, his credibility in tatters, flew to Rome, and on Dec. 13 the pope accepted his resignation.

The scandal became the subject of the critically acclaimed 2015 movie “Spotlight,” which depicted how a team of journalists from The Boston Globe uncovered the way church leaders shifted molesters from parish to parish.

While Cardinal Law kept that title after his resignation, he left an archdiocese in turmoil, facing 500 lawsuits, $100 million in damage claims and probable bankruptcy. As the highest-ranking American prelate deposed in the scandal, he became a focus of anger and feelings of betrayal among many American Catholics.

The cardinal testified before a grand jury and gave depositions in civil cases, but he was not charged with a crime or held liable for damages. In 2003, he was castigated by the Massachusetts attorney general, Thomas F. Reilly, who said that as many as 1,000 children had been sexually abused by 250 priests in the Boston archdiocese over 40 years, and that Cardinal Law had known of the problem even before he arrived in 1984 and had tried to suppress it to save the church from disgrace.

The cardinal, who initially retreated to a convent in Maryland, was appointed in 2004 as high priest of one of Rome’s four most prestigious churches, the Basilica of St. Mary Major. After Pope John Paul died in 2005, he was one of nine prelates who presided at the funeral Masses, and among the 115 cardinals who elected Cardinal Joseph Ratzinger as the successor, Pope Benedict XVI.

Bernard Francis Law was ordained a priest in 1961 in the diocese of Natchez-Jackson, Miss. Developing ties with Protestant and Jewish leaders, he helped to create religious and social-welfare groups of mixed denominations and races, and won national attention for ecumenical work. From 1968 to 1971, he directed a national committee of Catholic bishops on ecumenical and interreligious affairs.

After two years as vicar general of the Natchez-Jackson diocese, he was named a bishop in 1973 for the diocese of Springfield-Cape Girardeau, Mo. In 1984, the pope named him archbishop of Boston, then the nation’s third-largest diocese, with two million Catholics. His investiture came days after that of John J. O’Connor as archbishop of New York. Frequently called “Law and Order” by the secular press, the two politically savvy prelates denounced Geraldine Ferraro, a Catholic and the Democratic vice-presidential nominee in 1984, for supporting abortion rights. She and Walter Mondale lost in a landslide to President Ronald Reagan and George Bush.

Both archbishops were named cardinals in 1985 and became national Catholic leaders. Cardinal Law conferred at times with President Reagan and often with President Bush, with whom he was especially close. The cardinal spoke to Mr. Bush as often as once a month, rode with him on Air Force One and was invited to the Oval Office and the president’s summer home in Kennebunkport, Me.

Cardinal Law traveled to Europe, the Middle East and Latin America. Fluent in Spanish, he went to Cuba several times, meeting Fidel Castro in 1990 and leading delegations of Bostonians during Pope John Paul’s visit to Havana in 1998 and of bishops in 2000. He met President Daniel Ortega in Nicaragua in 1986, and in 1989 was a go-between for President Bush and the papal nuncio in Panama, who helped arrange the surrender of Panama’s dictator, Manuel Noriega, during an American military incursion.

In Boston, he made the rounds of fraternal clubs and political dinners, his durable Irish face beaming at St. Patrick’s Day parades. He mostly abstained from alcohol, but was a suave master of ceremonies and often appeared on television talk shows. He wrote columns for the diocesan newspaper, toured hospital wards and attended the funerals of his diocesan priests, whose ranks during his tenure dwindled from 1,000 to 500.

His popularity crumbled swiftly as the scandal closed in, but some recalled him fondly.

1.) Cardinal Bernard Law was fully complicit in abetting paedophile priests – he allowed known paedophiles to continue to remain in contact with children. But he was only forced to resign, not prosecuted or convicted for what was an open-and-shut case. Contrast this with how rule of law is correctly followed in Bharat for accused Hindu or Dharmic religious leaders like Asaram Bapu, Ram Rahim Singh etc.

2.) Cardinal Law was an American citizen but shifted to the Vatican (Rome, Italy) when the heat of the abuse scandal became too much in US. The Catholic Church did not punish him in any way for his crime – on the contrary, he continued to be a powerful priest in the Church hierarchy. US never pursued extradition of Cardinal Law to face justice for his crimes. This clearly shows the clout the Vatican, an independent city-state, carries in the Western World. No Hindu religious body has any such extra-constitutional protection from law in Bharat, and neither is it being demanded by any group.

3.) Cardinal Law was a major force in American politics – he regularly met with American Presidents and was actively involved in American foreign policy negotiations with other States. This is the de facto version of secularism in the most advanced democracy in the world today – USA, the so-called leader of the ‘free world’. In Bharat, secularism is implemented as utter contempt for the majority religion, i.e. Hindu Dharma. Secularism has meant that we have remain cut off from our own Dharmic heritage and ideas that could actually have been applied to build a modern, powerful Bharat.

4.) Notice how the article ends on a positive note with Cardinal Law portrayed as a man whose “great strength and love for the church ultimately impaired his judgment” – and this is an article in an ultra-liberal media outlet like New York Times. There is not one word in the article criticizing Christianity or the institution of the Church for the abuse scandal.

Secularism evolved as a European principle to escape the choke-hold that the all powerful Catholic Church had over medieval Europe. But while it allowed the State to function more independently, it in no way meant that the role of the Church in Western society had diminished. The Church has always been a key stakeholder in socio-political sphere of Western Society, and a vehicle to further Western trans-national interests. The West is rooted in Christianity, but preaches others about an ideal of secularism that it itself doesn’t follow – nothing wrong in this, this is just a strategy to promote their civilizational interests.

Bharat never faced the problem of Hindu clergy dominating the State – here, other sections of society such as warrior class and traders had an equal say in running the State. And Dharma is never static – it clearly says that social & religious mores will & should change with time, only core principles remain constant. It is an open architecture (to borrow a term from Rajiv Malhotra) that allows for thoughtful innovation in all spheres of life.

Every Hindu must realize the clear double-standards at play on the world stage, and shed the colonial mindsets that are employed to guilt-trip us at every step.