Accessing CSR funds and beyond – How Indic non-profits can serve Dharma in a digital, corporatized society 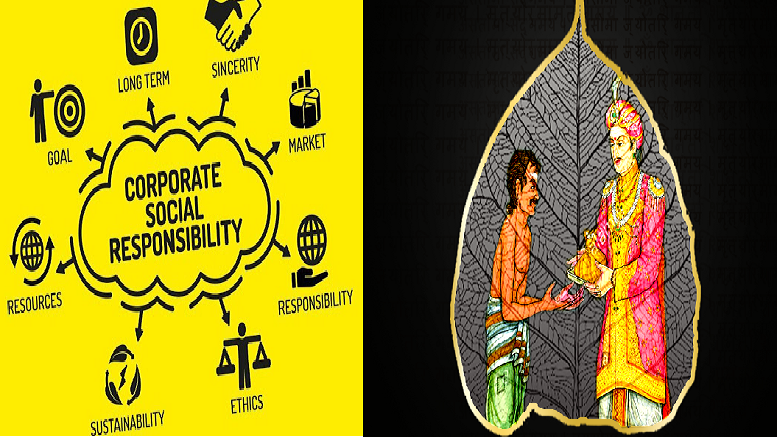 For thousands of years, a Hindu temple was a social and economic centre of any village, town or city on the Bharatiya subcontinent. Temples, funded by offerings by devotees, contributions by royalty and land owning class, and earnings from economic activity on temple land, were able to support large scale community schemes in their regions, most notably education. In addition, rulers or traders contributed to diverse welfare schemes directly.

The culture of ‘daan’ has been an integral part of the Sanatana Dharma, and even through the tumultuous eras of Islamic and British rules, Hindus maintained this tradition, supporting the construction of schools, dharmashalas, hospitals and many other schemes supporting livelihoods or alleviating poverty.

As much as the role that a Macaulayite education system over the British rule played in deracinating generations of practicing Hindus and vilifying their traditional traditions and practices, including the culture of ‘daan’, it may be argued that even after over seven decades of having an independent India, the culture of giving has yet to find its way back into every practicing Hindu household.

Over the last 100 years, the way we live, eat, work and communicate has undergone a metamorphosis unprecedented in human history. The roles and responsibilities that the kings played in the kingdoms of yore have been taken over by democratically elected governments, at least for most of the modern nation states, and almost all economic activity has been taken over by the corporate sector, dominated by large corporations.

As much as personal donations and contributions by individuals, families and communities continue and shall continue to be important for propagating the Sanatana duty of daan, corporations today represent a significant source of wealth, that they deploy, in addition to their business activities and interests, into the well-being of the communities around them.

In 2013, Bharat set a global precedent of sorts by becoming one of the first, if not the first, country to mandate corporate social responsibility by the Indian corporate sector. The Ministry of Corporate Affairs included Section 135 in the Companies Act 2013 that mandates all companies in Bharat, whether public or private, listed or unlisted, meeting certain thresholds, to spend 2% of their previous three years profits into community development activities ranging from education to healthcare to environmental protection to heritage protection to supporting entrepreneurs and start-ups.

In FY 2018-19, corporate sector ploughed over Rs 11,000 crores into various CSR activities, and currently, is spending hundreds of crores of CSR funds into supporting COVID-19 pandemic response, relief and recovery all across the country.

The primary channel through which CSR funds are deployed are on ground is through the thousands of active NGOs that act as their implementation partners, working on a range of activities that align with the CSR priorities of their respective corporate CSR donors.

Among the primary ways in which CSR differs from individual philanthropy is that it is molded in the same benchmarks of corporate governance that the corporate sector operates in today. Simply put, it means that corporates expect the same level of professionalism, transparency and reputation from their NGO implementation partners that they would seek in their business partners.

As per the CSR Rules, corporate spenders are required to  publish the details of their CSR programs, the amounts spent, their implementation partners, and other details mandatorily in their annual reports.

A good CSR program can be a win-win situation for all stakeholders, wherein the corporate entity gets to work with a reliable NGO as its implementation partner and is assured that its funds shall be utilized transparently, the NGO itself gains access to valuable funds to ensure it is able to continue running its operations and gains additional credibility as a corporate implementation partner, and finally, the community at large benefits.

With this context, any NGO that is looking to access CSR funds and partner with corporate on projects must keep in a find the following essential requirements.

1. Governance standards – Given that CSR today is managed and implemented at almost the same standards that corporates manage their business affairs, as highlighted earlier, NGOs looking to access CSR funds must display the highest standards of professionalism themselves.

This means, they must have all the necessary registrations and permissions to operate, have a clear management structure, i.e. office bearers who are managing it, maintain its financial accounts with periodic external audits, so that they are able to meet the minimum hygiene factors for a corporate to partner with them.

2. Measurement of impact – Being able to reliably measure and showcase the impact that an NGO has created is a very important in establishing credibility. This is most often than not linked to the very purpose of the NGO, the reason why it was formed.

For example, an NGO focusing on providing primary education in rural areas must identify and then track its success metrics, such as, number of schools/ paathsalas it runs, number of students that it has supported in the past and supports currently, has its interventions helped reduce secondary school drop out rates, has its interventions helped more girls get education, or any such success metrics.

3. Focused value proposition – As per the Companies Act, corporates are required to maintain a CSR Policy that lists down the priority CSR areas that the corporate says it would invest its CSR funds in. Corporates can choose a variety of CSR focus areas that may depend on the nature of its business, the personal preferences of its owners, or what its leadership feels is required by the community, among other factors.

Any NGO that approaches a corporate for CSR funds must make the effort to study its CSR Policy and its past CSR Reports to understand their CSR philosophy, priority intervention areas and the regions where they are active, so they can frame their value proposition appropriately and there is greater receptivity to its proposal by the corporate.

4. Longer term partnerships – The CSR Rules strongly favour longer term partnerships and projects over one time donations or one time CSR activities, and corporates by law are required to adhere to this requirement. NGOs who are comfortable with single, one-time donations in the past stand for disappointment in the CSR sector, as corporates are looking for entering into multi-year engagements, and as such, NGOs must pitch their value proposition not as a single, one-time activity, but as a project spread over a number of years.

To share an example, support an NGO focuses on providing ayurvedic healthcare to socially or economically backward rural population, and they are keen to build an ayurvedic hospital in a rural location. Rather than seeking a one time donation from a corporate for such an initiative, the NGO can present it as a 3 year project, wherein a corporate can come onboard as a CSR partner and each year, the corporate funds help achieve some milestone in its construction.

5. The importance of being visible – There are thousands of active NGOs in the country, many operating in the same region or same sector, and possibly hundreds, if not more, vying for donations from the public and CSR funds from various corporates. NGOs, no matter how old they are, must make an effort to be visible and heard in the modern era dominated by social media and digital communications.

While having an email id is a bare minimum to communicate these days, NGOs must invest in creating their online presence and on communicating regularly with the outside world on the work they are doing, their milestones and their achievements. Technology today enables us to reach anyone in any part of the world in an instant, and NGOs can take use this medium effectively to not only reach out to the entire world, but to raise funds. Having a strong online presence also helps enhance the credibility of the NGO among potential CSR donors.

6. Adopting a motto of universalism – corporate philosophies and actions today are driven by the same sense of universalism that in many ways drives a modern secular state, which means their interventions.

As much as CSR funds present a viable and credit source of funds in the development space, it must be kept in mind that they are not a panacea, and come with their own challenges and limitations. Primarily, it must be kept in mind that as the CSR funds that a corporate is obligated to spend on is calculated from their previous years’ profitability, it stands to reason that should their profitability get impacted, their CSR obligations also get affected.

Secondly, an NGO looking to access CSR funds must remember that they are competing with a number of government agencies, CSR-eligible funds, other NGOs and larger foundations for accessing the same funds. And often, no matter how compelling their cause or proposal is, the donor’s decisions are typically based on a number of both internal and external factors that may or may not work in the NGO’s favour.

Fundamentally, NGOs must work towards strengthening their internal governance, measurement mechanisms and visibility, for meeting  their larger, organizational purpose so that they can thrive in today’s world. The democratization of communication and widespread adoption of digital banking today allows every individual or group to share their purpose and impact with the rest of the world, and for any individual or institution in any part of the world to contribute financially to that purpose.

Hindu charities, NGOs and other institutions today are successfully making their presence and impact felt on social media, and using digital fund raising platforms and internet banking to raise funds for their causes. To share a very successful benchmark, the Akshay Patra Foundation, founded by Padmashri Shri Madhu Pandit Dasa, President of ISKCON Bangalore, twenty years ago has grown into one of Bharat’s largest and most well respected NGOs, and it runs itself as a professional organization with strong management and measurement systems in place, and has created a strong, global brand image with deep CSR partnerships.

Today, there is a very visible and very universal revival of Bharat’s Indic roots, which has been aided to a large extent by democratized social media and univesalization of digital banking that has allowed individuals from all walks of life and from all parts of the country to contribute to the revival intellectually and financially.

Bharat is blessed with civil society institutions which have been serving the Hindu cause for decades, if not centuries, and our institutions must seize this opportunity to adopt themselves to today’s corporatized and digital world to play their rightful role in serving Dharma successfully and effectively.