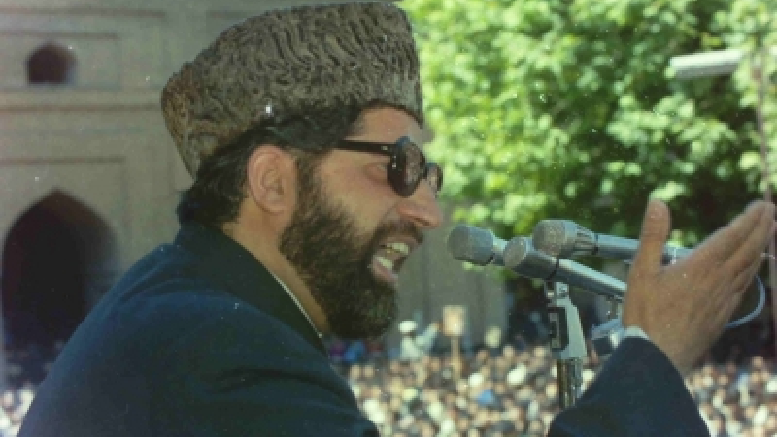 It’s the 31st death anniversary of Moulvi Farooq, Mirwaiz of Kashmir who was murdered by his “own” people at his residence at Nageen in downtown Srinagar on May 21, 1990. Mirwaiz Farooq, was a well-known cleric and staunch supporter of “Kashmiriyat”. He was also a fierce opponent of Pakistan supported terrorism in the state in the name of “Jihad”.

In 2009, Pakistani journalist Arif Jamal in his book Shadow War: The Untold story of Jihad in Kashmir, has detailed the role played by the Pakistani establishment, especially the Inter-Services Intelligence (ISI), in promoting terrorism and killings in Kashmir. He writes that Hizbul Mujahideen militants murdered some of the prominent leading scholars and political leaders in Kashmir and scores of fighters from the rival groups including the pro-independence Jammu and Kashmir Liberation Front (JKLF).

“Mirwaiz Farooq, a leading prominent personality in Srinagar was also killed; Syed Ali Shah Geelani ordered his elimination.” And the killing spree went on till 1995. Those who had publicly opposed Pakistani Jihad, were killed.

Mirwaiz was the biggest potential rival of Syed Ali Geelani. Geelani could not emerge as the sole political leader of the militants while Mirwaiz Farooq was alive. It is commonly thought that an individual called Ajmal Khan directed his killers. But the book says that Ajmal Khan was not in contact with Hizbul at that time, so it seems unlikely that he was asked to perform the task.

The killing of Mirwaiz was not unexpected. In a situation where the fundamentalist, Pakistan supported and funded Jamaat-e-Islami had been seeking to grab his following, Mirwaiz had survived by walking a tightrope.

Though Mirwaiz was on the militant hit-list, he had refused police protection.

He was in favour of popular rule and had a line open at the center to Minister for Kashmir Affairs George Fernandes. For the government, he was the only sobering element among the fundamentalists.

In fact, in April 1990, the Pak media had unleashed harsh criticism against the Mirwaiz, branding him as a “stooge of India and the paid agent of New Delhi.” It appeared that Pakistan was apprehensive that due to his popularity, the Mirwaiz could eventually assume political leadership of Kashmir, upsetting Islamabad’s plans.

The immediate provocation for the killing could well have been three letters the Mirwaiz wrote to the then Pakistan prime minister Benazir Bhutto, the second to President Ghulam Ishaq Khan, and the third to the prime minister of Pakistan Occupied Kashmir (POK), Sardar Abdul Qayoom Khan. Pained and passionate, the letter was half-appeal, half-protest. Killing innocent persons must stop, he wrote, asking how he would answer God on Judgment Day for these deaths.

The letters stressed that killing of innocent persons had to stop, something that would have made the Pakistanis uncomfortable. Earlier, he had publicly denounced the Rubaiya Sayeed kidnapping as un-Islamic. His live contact with the National Front Railway Minister George Fernandes, was another red-line which Pakistan thought he had crossed.

Mirwaiz was known for his courage to stand against state oppression, especially on human rights violations but also against political corruption and political injustice. He never hesitated to candidly express his thoughts in his own inimitable wayï¿½even after he was put behind bars in 1965 for a period of two years and ten months.

At a press conference held at the Mirwaiz Manzil on 25th May, 1983, he said, “I strongly condemn violence, aggression, dissension, prejudice and mistrust. My motto has all along been, “Live and let others live”. I am opposed to tyranny, dictatorship and gangsterism”.

Twelve years after Mirwaiz Farooq’s assassination, Abdul Ghani Lone, All Party Hurriyat Conference leader, was gunned down as he attended the 12th memorial service for Mirwaiz Moulvi Farooq, at the Eidgah in Srinagar’s old town. Sajjad Lone, son of Abdul Gani Lone, had blamed Pakistan’s ISI for his father’s death. “ISI is behind my father’s killing,” he had said.

“Lone sahib, Mirwaiz Farooq and Prof. Wani were not killed by the army or the police. They were targeted by our own people. The story is a long one, but we have to tell the truth,” he asserted, stopping short of naming any terrorist group supported by the then Hurriyat chief, which killed them or delving into the circumstances under which the murders took place.