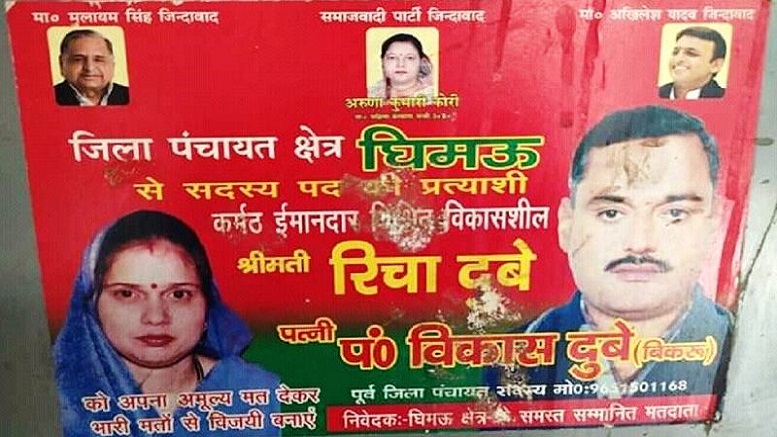 On the morning of 10th of July, 2020, infamous criminal Vikas Dubey was shot dead in an encounter by UP Police. He was arrested on 9th July in Ujjain, MP and was being brought to Kanpur, where he had killed 8 policemen just days ago. Police reported that the car carrying him met with an accident while avoiding cattle on the road and in the ensuing chaos, Dubey tried to snatch a weapon from police and run away. After challenging him to surrender, he was shot dead in an encounter in which some policemen also sustained bullet injuries, .

The death has generated much controversy in the political arena. It was, however, settled that political opponents of CM Yogi would criticize him in this case, no matter what. This is best exemplified from the photo below which shows two tweets by Rohini Singh, a ‘journalist’ for the far-left propaganda site The Wire:- 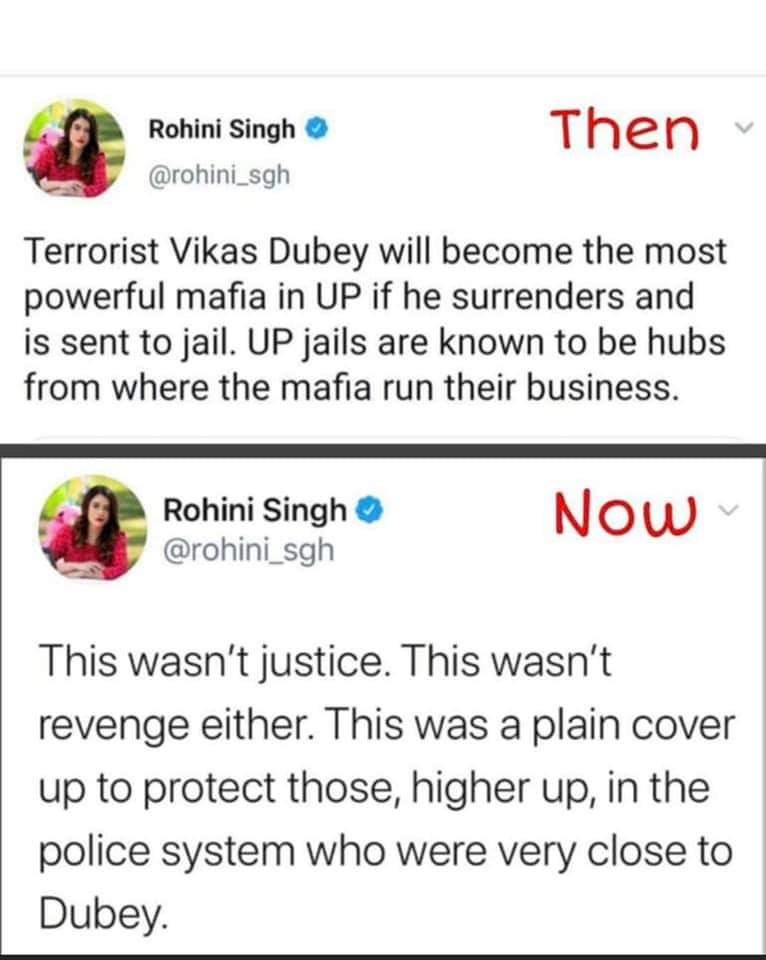 The criticism of the encounter took may forms. Most of the comments were flippant and intended to derive political mileage out of the whole episode. Some of these exposed the intellectual bankruptcy of UP’s political opposition.

A concerted effort was made ever since the killing to brand Vikas Dubey as a ‘Brahmin Terrorist’. Many right-wing twitter celebrities also used the term ‘terrorist’ to describe him. It is important to dispel this notion and clarify the difference between a terrorist and a criminal.

Terrorism has been defined in various ways by various people. If you do the research, most definitions of “terrorism” have these common elements:-

Clearly, violence should serve some “political, religious, ideological or social objectives” and not some “commercial” objectives. Terrorism is a subset of crime. It should be noted that most of the crime is motivated by money, rather than ideology.

Vikas Dubey was not a terrorist. He certainly was a heinous criminal. But his objectives were not political, religious, ideological or social. His motivation for crime was money. Indeed, the way he changed parties and had friends all over the political spectrum proves him to be a mercenary like the Italian Mafia or Japanese Yakuza or Chinese Triads.

Some people have stated that having possession of an AK47 proves that Vikas Dubey is a terrorist. They are wrong for so many reasons:-

Vikas Dubey being a Brahmin by birth is being used by Congress leaders to portray Yogi Adityanath as anti-Brahmin! Of course, these people have no love lost for Brahmins. Here is a tweet by Congress leader Dr. Udit Raj in which he insinuates that Dubey was killed because he was a Brahmin. The insinuation is that if he were a Thakur/Kshatriya, he would have been spared.

It is a different matter that Dr. Udit Raj is extremely anti-Hindu and Brahmin-phobic. Let’s take a look at a recent tweet by an organisation (All India Parisangh) he heads about Brahmins. It depicts Brahmins as pigs. It must be noted that the real name of Udit Raj is Ram Raj. He was an IRS officer after clearing UPSC civil services exam. He resigned to get into politics and became an MP for the first time on a BJP ticket in 2014. He jumped ship to join Congress just before the 2019 elections after being denied a ticket by BJP. He changed his name from Ram to Udit, as he is extremely hateful of Hindus and their Gods. 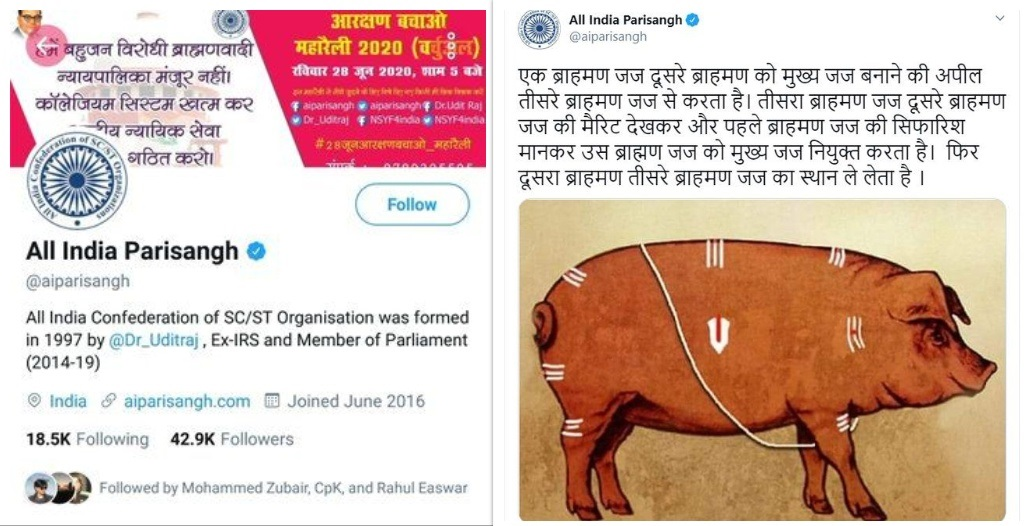 It is clear that crude efforts by a Congress leader to give this encounter a caste angle will fool no Brahmin.

Initially, many Islamists and their secularist allies also gave it a communal color saying that if Vikas Dueby were a Muslim, he would have been encountered and not let away. When he was arrested, they said that govt kills people for throwing stones in Kashmir and is just arresting him because he is a Brahmin; now he will run his criminal empire from jail.

Now that he has been encountered and no Hindu has come on streets against it, they have assumed a studied silence. The usual media vultures, who do stories on dead terrorists detailing how Riyaz Naikoo was good in maths, how the father of a terrorist Burhan Wani was a headmaster and how Osama was a considerate father, have vanished.

No outrage over “police excesses” is seen after the encounter of Dubey’s gang and the utter destruction of his familial property, whereas such rhetoric is routinely heard after encounters of Maoists, terrorists, and when Islamist ‘activists’ like Safoora Zargar, Sharjeel Usmani etc are taken into custody in a legal manner. This episode completely unmasks the selective outrage and complete hypocrisy of the Indian left-liberal.

Vikas Dubey was arrested on the premises of Mahakal Temple in Ujjain. He was not offered protection in the temple and did not use the temple premises to hide during the seven days manhunt. Some people on social media declared that the Mahakal temple is a ‘hideout of terrorists’.

The intention was to create a false equivalence with mosques. It is well known that Kashmiri terrorists routinely use mosques to hide and ambush security forces. Many mosques in India and in other countries have aided terrorists by serving as weapon depots, hideouts and recruiting grounds. Indeed, even Pakistan Army had been forced to act against terrorists who were hiding in Lal Masjid of Lahore and in the seige, 11 soldiers and 84 terrorists were killed apart from many other injured and captured terrorists!

It is to be noted that there is no record of any temple being used for terrorist activities. No weapons cache have been found in any Hindu temple or Gurukul, anywhere in the world.

Vikas Dubey was killed to protect those in power

This is the most common refrain today. They say that Dubey would have given information about his political connections if interrogated, and that is why he was killed. While it looks a reasonable statement at first glance, it shows the immaturity of those politicians and observers.

For example, take Akhilesh Yadav. He would have known that Vikas Dubey was affiliated to Samajwadi Party and his wife Richa Dubey fought elections on a Samajwadi ticket. However, he insinuates that had the encounter not happened, it would have shaken the BJP govt in UP.

Let us say, Vikas Dubey was in jail. In that case the insinuation would be that he has not been killed due to power and now he will run his gang from jail. We have seen the same statement from Rohini Singh above. She was the propagandist in chief of Samajwadi Party in 2017 state elections and allegedly got a 2BHK flat from Samajwadi Party in Noida for the service.

Indeed, if the past is any guide, Dubey’s going to jail would not have impacted his criminal enterprise. Many politically connected ‘dons’ of UP including Mukhtar Ansari, Ateeq Ahmed and Sunil Rathi are in jail for years and yet run everything from inside. Never have they taken the name of their political masters and indeed they have become influential political figures themselves through proxy.

Why are people celebrating his death?

That said, why are people celebrating the death of Vikas Dubey? It is no secret that Bharat’s criminal justice system is beset with multiple serious issues. The system is widely seen as corrupt and understood to be easily manipulated by powerful people.

Investigations by police are often shoddy due to lack of manpower, resources and appropriate training. Corruption adds another dimension. As a result, the conviction rate is low even in serious cases like murder and rape.

Even when a criminal is under trial or serving his sentence in jail, he can safely run his empire from there. Indeed, he gets all the facilities of a five-star hotel in jail. It includes AC, TV, mobile phone, food of choice and servants! Many criminals, for example, Mukhtar Ansari and Sunil Rathi, live in luxury and run their criminal enterprise from jails while the face of the gang in the outside world is one of their relatives.

During trials, it is common for evidence to be erased and witnesses to be murdered. The trial can go on for decades and convictions, even if they come, are often too late. An example can be taken of the L. N. Mishra murder case.

L. N. Mishra was a Rail Minister in Indira Gandhi’s cabinet. He was a powerful man from a powerful family. His brother became CM of Bihar for 3 terms. He was murdered in 1975 at Samastipur Railway station. The murder trial in a lower court was finished in 2014 after about 39 years. Most of the witnesses were dead, accused turned from young boys to old men and a total of 20 judges heard the case.

Imagine the plight in cases of common men, if this is the case of a Cabinet Minister! About 3.5 crore cases are pending in Bharatiya courts according to govt. statistics. Many of these are petty civil cases filed by govt., but these take up a lot of time. These impact serious judicial work. Judiciary also does itself no favors by entertaining frivolous or motivated PILs from influential busybodies.

The Vikas Dubey encounter case has not only exposed the hypocrisy of political opposition in the country, it has also established that people are fed up of our tardy judicial system. The same sort of reaction was seen in the encounter of accused in the Priyanka Reddy rape and murder case in Hyderabad last year.

The political parties who are trying to give this a communal or casteist angle and trying to score brownie points would certainly be taught a lesson by people. The govt should, in the meanwhile, focus on the urgent issue of criminal justice system reform. Rule of law is the sine-qua-non in a modern democratic nation.