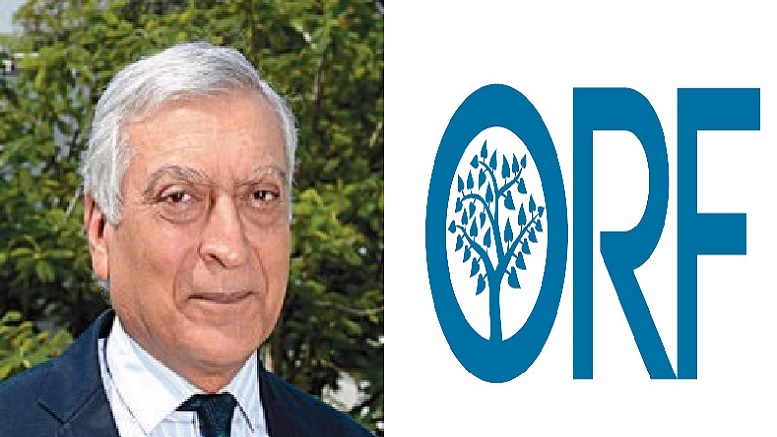 The crippling unoriginality and mental colonization in large swathes of Bharat’s strategic thinking community has become exceedingly clear over the past few years. It is not a coincidence that this rot has become clear just as the nation has started challenging some of its founding myths and the prevailing elitist discourse that has long forced us to think and behave like an outpost of the neo-colonial Anglosphere.

The tweet to which Sibal had responded has now been deleted by the ORF handle.

But anyone who observes the commentary generated by our think-tanks, and the type of people they employ or collaborate with, will leave with the distinct feeling that at least part of their ‘research output’ perpetuates Western or other foreign narratives about Bharat, rather than providing a Bharat-centric take on the rest of the world.

ORF has in the past published pieces that are thinly-veiled propaganda for Turkey’s Islamist President Erdogan, who is at the forefront of establishing a Turkey-Qatar-Pakistan-Malaysia axis that is extremely hostile to Bharat’s interests. A number of Hindu-baiters are employed or associated with ORF: Mihir Sharma, Saikat Datta, Sudheendra Kulkarni (till recently), Maya Mirchandani. Others like Manoj Joshi are better to concealing their contempt for Hindus and the Hindu civilization, but it becomes obvious if you read between the lines of the pieces they pen for odious propaganda outlets like The Wire. Another ORF name in the ‘neutral’ (but not really) list: Kabir Taneja.

Yes, the think-tank tries to balance this out by appointment of a few cogent, nationalist voices as well – but the very fact that it panders to the same entitled, liberal/pseudo-secular forces which have weakened our strategic thinking for decades, shows that its claims to innovative thought-leadership are hollow, at least for now.

Established in 1990, ORF is, by most accounts, Bharat’s leading think-tank, private or public. It is majorly funded by Reliance Industries. The Global Go To Think Tank Index, maintained by the University of Pennsylvania, put ORF in 27th place out of 176 global think tanks in its 2019 Report – making it the top-most Bharatiya think tank in that list.

The next ones from Bharat on that list are – govt. funded Institute for Defence Studies and Analyses (IDSA) at 41; Centre for Civil Society (CCS) at 83; Indian Council for Research on International Economic Relations (ICRIER) at 110; Energy and Resources Institute (TERI) at 111; Development Alternatives (DA) at 139; Delhi Policy Group at 143; Centre for Land Warfare Studies (CLAWS) at 172; Centre for Policy Research (CPR) at 174. However, the local Indian chapter of Brookings Institution (India) beats them all, even ORF, coming in at 23.

Astonishingly, the Univ. of Pennsylvania report on think tanks shows Bharat as the country with the second-highest number of think tanks: US has 1871, Bharat has 509, and China has 507 think tanks. It really makes you wonder what sort of thinking these organizations are doing, when we look at the dismal state of our policy, academia and media discourse.

The coverage of UP elections has again shown Hindu-hate of liberal-secular media elites; time to punish them